BLOG: A little bit about my move from The Open Mat to focus on Mat Talk 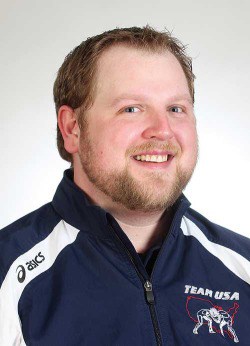 On November 7, I put out an email to coaches and sports information directors about my change in focus when it comes to wrestling.

For the last two years, I worked at TheOpenMat.com. The opportunity presented itself after my daughter Lucy was born in June of 2012. I was in my third year working at USA Wrestling and I honestly thought I’d retire working for USAW and living in Colorado Springs.

Then life happens. I was extremely happy working with senior-level athletes, the grassroots level, and of course, college and high school wrestling events. I’ve often said Fargo is one of my favorite events. I’ve attended the tournament every year since 1999, only missing one actual day of competition in the last 16 years. That day was when I was driving to Fargo from Pennsylvania as my last actual on-the-job coverage assignment for InterMat/NWCA.

Some of you might have read where I’ve discussed my daughter and her medical issues. It’s not something I publicize a whole lot. People who add me on Facebook will typically just see posts about travel, links to my podcasts and pictures of my daughter and maybe a funky instagram photo or two.

My daughter was in the NICU for four months. During that time, I covered Fargo, the Olympics and the Junior Worlds in Thailand. That was pretty much the final decisive factor to move back to Minnesota, where my wife is from. My initial plan was to work remotely for USAW. Then Eric Bettermann, the founder of TheOpenMat.com, approached me about an opportunity that peaked my interest. Eric was working with Ray Brinzer on a new wrestling community that started as a message board and blossomed into a news outlet.

TOM and Amateur Wrestling News had entered into a merger. I could work from home, spend time with my daughter and when I traveled, family would be close so my wife and daughter would have people around to lend a hand. In Colorado, we were 18 hours from Minnesota and even further from my native Virginia. It just made sense to be able to work from home, watch my daughter and be an actively-engaged father. There was an extremely high workload at USAW, which as I got older and had a family, became somewhat trying. Some of it was creating content that didn’t exist before and sticking with the updates, like the daily scoreboard, which I’d also brought to TOM.

The idea was to have me serve as the editor, lead designer and key content creator for AWN and TOM. AWN’s web presence merged with TOM and it seemed like everything was moving in a positive direction.

The deal with AWN and TOM never got finalized and in March of 2014, TOM opted to walk away from the deal and move forward with digital offerings. Ultimately, we continued to provide some stellar coverage, offer innovative offerings and saw site traffic continue to rise.

Some might remember how I got my start with wrestling. It was announcing high school matches during my time as a student. In high school, I wrestled my year and a half, coming out at the tail end of my junior year. I wrestled all summer, went to camps and came out for the team again as a senior. I wasn’t much on the mat. I had some really talented teammates who would basically crush me every day. It was humbling. My wrestling coach, Billy Ruff, knew I wasn’t going to be a contributor to the team’s success on the mat. He knew my passion was writing and broadcasting.

My senior year, Greg Martin, Henry Ayer and myself started a high school wrestling radio show called Mat Talk. A year later, I was in college at Old Dominion and took my local rankings to the web. I was also working at the Daily Press, a large major newspaper in the area. I was tying in my relationship with the paper with my offerings on Mat Talk Online, which I’d initially designed (awfully) in Microsoft Publisher on my lightning fast Gateway 2000 with 1.3GB of hard drive space and a screaming 33.6 modem.

That’s where Mat Talk was born. It was where I cut my teeth, got my real start. I started working with Virginia USA Wrestling and Virginia AAU wrestling, covering events and serving as the media director. I then went to Fargo in 1999 when a coaches ticket opened up days before the flight. That changed everything. I met Gary Abbott. He didn’t know who this 19-year-old kid from Virginia was. Rob Sherrill, who I’d met at the Virginia Duals while in high school, vouched for me and that was my first Fargo as a member of the media.

I kept Mat Talk rolling through the end of 2004. In 2005, I was offered a position to operate InterMat after the NWCA bought it from Tom Owens. I did that for three years and enjoyed it. J Robinson and Wade Schalles offered me a gig in Minnesota in 2008 for Wrestling 411, a start-up aimed at creating a SportsCenter-type show. Kyle Klingman and I moved to Minnesota to operate the company from a content standpoint. Kyle and I eventually moved from the studios at KAUG, the student radio station at Augsburg, for my basement. I lived with Joe Busch, the older brother of one of my college buddies, Charlie Busch. The TV production side never got off the ground with 411 due to funding issues. Kyle and I made the best of it, going with a twice-a-week online live show that would archive on the web.

A few months in, I realized the backend of the 411 website used a program called podpress (or powerpress, one of the two) and it updated a listing in iTunes. This was the start of producing wrestling podcasts, even though we weren’t really offering it as such an offering. Hindsight might have had us promote this differently, but that was six years ago and the medium was still extremely new and probably would have been hard to push.

When 411 withered away, USAW had an opening and I applied and got that job. During my second year, I launched the USA Wrestling MatChat, a true podcast. I was learning about the medium and writing my own RSS feed in XML. I only did a few shows, but added Kyle’s On The Mat program from the National Wrestling Hall of Fame to the RSS feed. When I left USAW for TOM, I continued recording and distributing his show. In November of 2013, I started the Short Time Wrestling Podcast. Throughout the season, I worked with formats, goofy stuff and news into a semi-daily type of show.

When the season ended, the interview format became preferred and the downloads started to move upward. A few months later, I developed a concept for a new product and had that lightbulb moment that this was something I could develop and market as a product for programs, clubs and organizations.

So what was I going to do about it? I’m a geek at heart. I like tech stuff, I like Star Wars, I like learning about new technology. I’m not uber-geeky. I don’t attend Star Wars conventions or anything like that (my cousin, on the other hand, met her husband at a Star Wars convention – they even had an Imperial-themed wedding, complete with storm troopers and clones).

So I researched the viability and decided this was the time to start developing a new brand and product. I’d lost the Mat Talk domain several years ago because of a billing snafu and as I searched different domains, I came across one that I liked. Apparently someone already owned it, but wasn’t using it. I asked what it would cost and the price was just a bit outlandish. On a whim, I looked up my old domain and sure enough, there was a link saying it might be for sale. DONE DEAL. Mat Talk was back!

I’ll still maintain some relationship with TheOpenMat.com, as I’ll probably contribute some feature stories and show up on some of the live audio streams. We’re leaving on good terms. I will provide content around the country as a freelancer and broadcaster with my main point of emphasis being my shows. Some of the more relevant Short Time Podcasts will still be posted at TOM.

Currently, Mat Talk Online is known as the Mat Talk Podcast Network. I currently host five shows and distribute one other (On The Mat). Virginia Tech, Old Dominion, Maryland and the World Wrestling Resource, operated by Jon McGovern, Terry Brands and Dennis Hall, are the charter members of the network and the first four Mat Talk shows my new company has developed.

There’s several colleges and organizations looking to come on board in the future, so soon fans will have a lot of portable, on-demand options for content consumption. The podcast medium has exploded and with the increased use of mobile devices, there doesn’t seem to be a limit on the number of people who can discover and listen to wrestling content on the web or on their mobile device. Two of my shows (ODU and Virginia Tech) already have mobile apps for iOS and Android.

Without getting too much into the sales pitch, doing these shows focus on my strengths, allow me to control my own destiny in many respects. However, if you're interested in a show, contact me at jason@bryantwrestling.com or jason@mattalkonline.com and we can talk about the plans available.

This will also allow me to announce more events, do more television and spend much, much more time with my family.

I’ve enjoyed my time everywhere I’ve been, but there’s something rewarding about doing your own thing.

So that’s a bit of an update of what’s going on and I hope you check out the Mat Talk Podcast Network for the entire network of shows or for content related to the team and organization-specific shows.