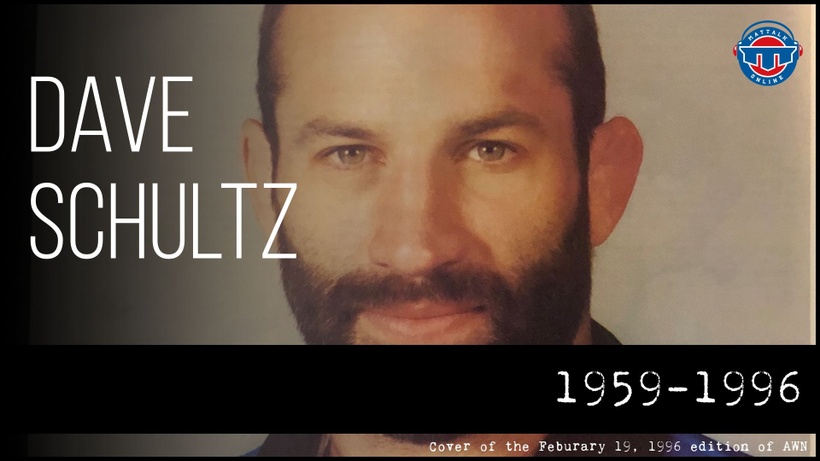 It's been 26 years since John du Pont killed Dave Schultz. There's no colorful way to write that sad fact. Everyone I've talked to over the years regarding Dave's memory always came back to one central construct – what would Dave Schultz be doing today if he were still alive. It's a hard question to answer. Having never met Dave, I can't give any concrete scenarios that wouldn't be borrowed from someone else's words.

The following isn't intended to be a retrospective or some poignant offering about what Dave meant for the sport of wrestling, it's to serve as a memory of sorts. In January 1996, I was a high school junior, pretty new to the sport of wrestling. I had little idea who Dave Schultz was. His lore grew as I watched the 1996 Summer Olympics, mostly from a hospital waiting room, where days after Kurt Angle and Kendall Cross won Olympic freestyle wrestling golds for the United States, a friend passed away. I recalled people telling stories about Dave and as I asked questions about freestyle wrestling. Right now, there are kids all around the country who only know of Dave through Rudis-branded shirts, highlight videos and a High School Excellence Award that bears his name.

In my office sits a treasure trove of historical data, results and articles, including a very robust collection of Amateur Wrestling News magazines, dating back to 1956. The internet only goes back so far and prior to the internet reshaping our sport and how its covered, we had the printed word. When I was sorting these AWNs a few years ago, I came across one of the more moving covers the magazine has ever produced. Action shots have been the hallmark of the magazine's cover since the late 1980s, but this February 19, 1996 cover was simple and pure. It was simply Dave Schultz.

With the permission of Amateur Wrestling News and Nancy Schultz Vitangeli, I've transcribed the obituary that ran within the pages of AWN as a reminder to those who knew Dave to remember what he was about, and for those who didn't know him, to read what he was about in the moment, days after he was taken from the world.

Schultz met his wife, Nancy, during college at the University of Oklahoma. They were married on Feb. 14,1982 in Norman, Okla.

Nancy Schultz said, “Our family is devastated and saddened by Dave’s death. He was not only a world class athlete, coach and mentor, but a devoted and loving father to our children and husband to me for the past 14 years. Dave will be missed so much by his family, friends and the wrestling community around the world. Dave had a passion for his sport and an enthusiasm for life that was unmatched. Over the past few days, we have heard from people across the country and around the globe whose lives Dave has touched. Their kind support, outpouring of love and fond memories of Dave have helped sustain us during this very difficult time. My family must now turn its focus and energy to my children, Alexander and Danielle, who had a very close relationship with their father, and who are struggling to understand how and why this tragedy happened, and how they will possibly fill this void in their lives.”

Five-time World champion Bruce Baumgartner said, “I have known Dave for almost 15 years, and he is the most unselfish and giving person I have ever met. He was the most devoted father and husband – he loved his kids and family. Obviously, Dave was one of the best technical and strategic wrestlers, and one of the best coaches. I have heard from so many of his students who loved him, from the high school level to the international arena. Dave was always upbeat and positive, with a smile on his face.”

Long-time friend and teammate Ed Giese said, “Dave was wrestling -he revolutionized the sport. Dave was bigger than life, touching everyone he met in a positive light. My sincere sympathies go out to his family. Dave loved Nancy and the kids with the same passion. I will never forget him or the things that we did together. He was my idol in life and beyond.”

Throughout his career, Schultz won almost every honor available in the sport of wrestling. His career highlights include 1984 Olympic Champion, 1983 World Champion, three-time World silver medalists, and two-time bronze medalist. He was a Goodwill Games champion in 1986, a Pan American Games champion in 1987, and a World Cup champion four times. 1995 World Champion Kurt Angle said, “Dave was the godfather of USA wrestling, contributing as a coach, a leader, and an athlete.

He cared about everyone, and always put people first, no matter who you were. He even learned six or seven languages so that he could speak to different athletes. I loved him and respected him, and he will be greatly missed.”

Three-time World-level Champion Kevin Jackson said, “Dave was my wrestling mentor and my hero. He had the greatest technical mind of any wrestler, and his love of wrestling inspired everyone he ever met. He has touched so many lives. I loved Dave, and I am really going to miss him.”

Jim Scherr, Executive Director of USA Wrestling said, “There literally was not a wrestler Dave wasn’t willing to help. He had a profound impact on virtually all of the elite athletes in the U.S. in the last 15 years, as a competitor, coach and friend. He will be irreplaceable among the wrestling community. He touched the lives of thousands of people, all of whom were enriched by his spirit. He shared his love and enthusiasm for wrestling with everybody that he met, making friends wherever he travelled. He was loved by wrestling fans here in the United States and all over the world. USA Wrestling wishes to offer condolences to the family and friends of Dave Schultz. We share their grief and sense of loss at this time.”

Schultz was born on June 6, 1959 in Palo Alto, Ca. He was a California state high school champion for Palo Alto High School in 1977. Schultz attended the University of Oklahoma, where he was a NCAA champion in 1982.

Schultz is survived by his wife, Nancy, and their children Alexander, 9 and Danielle, He is also survived by his father, Phillip G. Schultz, a counselor, his mother, Dorothy Jean St. Germain, a clothes designer, and his brothers and sister, Mark, Seanna, and Michael.

A Memorial Service was held on Sunday, Feb. 11 at the Palestra Gym at the University of Pennsylvania. A fund has been established in memory of Dave Schultz for the

Cards and expressions of sympathy may also be directed to the above address.

AWN added this note below the obit.

Editor’s note: John E. du Pont has been arrested and charged with the murder of Dave Schultz. Shultz was shot three times outside his home on the estate of du Pont and Foxcatcher Farms. du Pont was arraigned on first-degree murder charges and is being held at the Delaware County Prison, pending a court hearing.

du Pont, a heavy contributor to USA Wrestling, was a sponsor of the national freestyle team from 1987 through 1995. According to a press re¬lease from USA Wrestling, his contribution were about $400,000 per year, but they have not received any direct sponsorship funding from du Pont since June of 1995.