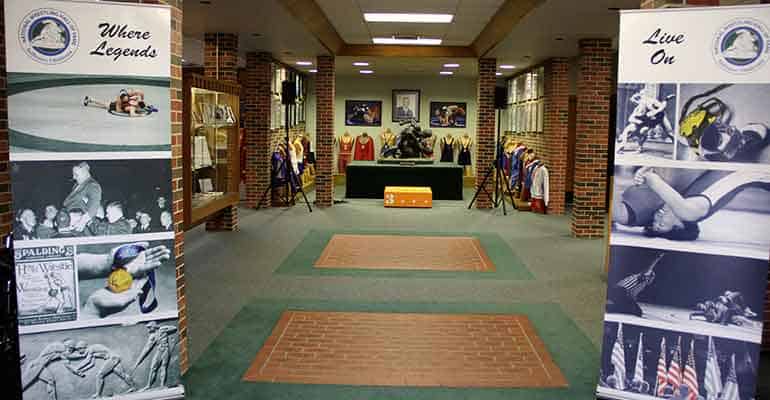 The Mat Talk Podcast Network is launching a crowd-funded Legends podcast series for the National Wrestling Hall of Fame.

The initiative with Jason Bryant of the Mat Talk Podcast Network will use crowdfunding to defray the cost of producing and distributing the Hall of Fame Legends podcast. Bryant, who will serve as the host and producer for the programs, will donate the shows to the Hall of Fame as part of that digital outreach program. The show will be available at www.halloffamelegends.org and once shows are produced, they'll be available on iTunes, Stitcher and various other podcasting applications.

The initial start-up costs associated with two shows a month is $400. Wrestling fans can contribute to the initiative by going to patreon.com/mattalkonline and donating to the effort. Once the initial start-up cost is reached with small, monthly contributions, production will begin. If additional funds beyond the base monthly cost are met, additional episodes will be added to the library.

“The idea behind the podcast is to get an opportunity to hear what our wrestling legends have to say, to hear their stories and to preserve their memory and legacy,” said Jason Bryant, founder of the Mat Talk Podcast Network. “This is a way to continue hearing the stories of our greats and share that history with a generation of wrestling fans who never had the opportunity to see them compete or see them at all.”

“The goal here is to take the stories of the past and put them into a format that not only works with the ideas of the Hall of Fame’s Digital Outreach program, but to make those interviews available and free to the wrestling community. The crowdfunding part of this helps keep costs down from the Hall of Fame, since they’re in a fundraising stretch right now and to give our fans in the community an opportunity to directly contribute to new and innovative technologies within the entire National Wrestling Hall of Fame community.”

Contributors have the ability to support the effort monthly and can donate as little as $1 a month or they can set their own contribution level and can cancel at anytime.

“I’ve wanted to do a show with our legends for a while now, but through crowdfunding, the concept has an opportunity to take off quicker and become more robust,” said Bryant. “I’m happy to donate the finished product to the National Wrestling Hall of Fame. I hope people see the value in being able to give our greats a voice. There are so many stories to tell and the podcast format makes them even more mobile.”

At the end of each year, the Mat Talk Podcast Network will also donate any additional contributions once costs are covered to the National Wrestling Hall of Fame.