The Rio Blog – August 8-9: The Departure and Arrival 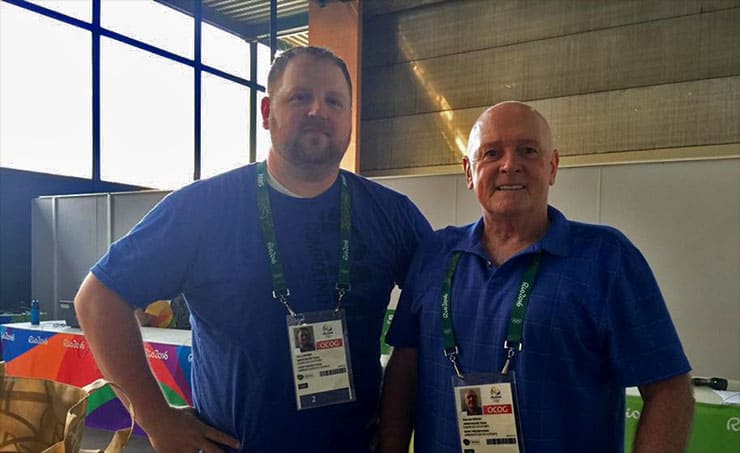 August 8 was a tad bittersweet. On the one hand, I was diligently packing up two bags, a backpack and a small messenger back for my multi-flight trip to Rio and brimming with excitement. On the other, I was leaving behind a wife, a four-year-old daughter and a one-month old daughter.

I've become quite accustomed to doing the whole family man thing, so the last month has been really great seeing my newest daughter move just through that whole “tiny human” stage. She's got wicked curly hair as well.

I would do this in a podcast form, but I'm on hold right now. I can record later ones … well, later. So I'll just blog about it.

This is my second Olympic Games. The first came when I was a staffer at USA Wrestling working on the communications team. This year, there won't be any real mingling at the Main Press Center, few, if any, nights of hanging with the training partners and then there's that whole “working” thing I'm down here for. On Sunday, my old newspaper, the Daily Press, had a rather humbling story on me and my role as the PA announcer for the 2016 wrestling competition at the Games. I knew the story was coming, I just didn't expect it to be on the front of Sunday Sports.

So I'm packed up and ready to roll. Our nanny Leah came over to watch Lucy (the oldest) while my wife Abby drove me to MSP with Ruby (the youngest) in tow. MSP > ATL > GRU > GIG.

Let's backtrack just a moment to about 4 a.m. when Ruby woke up crying and I, in a sleep-induced daze, looked at my phone to see Delta was having major outages. Hrm. I flew out later in the day, I think I thought to myself.

Well, I get to the airport about 2 1/2 hours early, go to check in for my flight and see my flight would be delayed and I'd miss my connection from Atlanta to Sao Paolo. The Delta app gave me — yes, I was flying Delta, it's kind of what you have to do flying out of MSP as much as I do — showed a direct from ATL to Rio, so I'd miss the whole connection in Sao Paolo and get in about three hours earlier. I'd probably be able to share a ride with Ken Berger, a fellow Virginian and fellow announcer who's had PA duties or production duties at the Games since 2000.

Once I stand in line (for an hour, simply waiting for someone's phone to free up — like a real phone) to validate my international flight, I then get through security only to get an update saying the flight I was re-booked on, for 5:45, was no longer on time and was delayed three hours — I was then going to miss my connection to Rio.

So I made a decision to try to get back on the first flight, since the delays would likely give me an opportunity to reach the connection in Atlanta and make the Rio connection. Well, Delta people were getting thrashed all day due to a system outage. I came prepared with my best “happy” face and my best “you can't control what you can't control” mindset. I also brought some Team USA pins I'd planned on using for trading when I got to Rio.

At one point, as I was standing at the very front of the airport waiting for the phone, one person came up, obviously dejected over the whole deal and screamed “we're not rich!” at the attendant who tried to explain to them that Delta wasn't going to refund them a full fare ticket on Southwest. I mean, I get it, it sucks, but let's be clear, it wasn't the attendant's fault they bought a $1,000 ticket on bad advice from someone else.

Anyway, I decide to head to Gate G15. This kid Cooper just got on duty, so he'd been spared the angst from morning and midday travelers. With the FlightTrack app in hand, I was looking up options to get me back on my first flight, but keep the Rio re-booking. He did one better, instead of my original 4:48 flight, he put me on the 3:05 — which didn't plan to take off until 7:05. I would head over to Gate F13 and get my ticket there.

Cooper got a pin. So did the woman at F13 and so did the two women who helped me at the initial check-in.

I encountered a gaggle of 14-year-old softball players from Ovideo, Fla., who then proceeded to ask me every question about my life, much to the chagrin of their coaches. The one male coach had dealt with this all weekend, he was letting me take this abuse and wasn't doing anything to step in. Funny guy.

So we finally get to the plane, we take off and I MIGHT have a chance to make this. The Rio flight is delayed until at least 11 p.m. because inbound from San Francisco had just taken off. I'm also in seat 45C.

Before taking off, I'm sitting behind a husband with one twin and next to his wife with another twin — they're two. The woman politely asks if I could take the middle so her son could have the aisle because he might get up a lot to use the bathroom. I've traveled with Lucy enough times to know a parent has a tough job there.

Started to watch The Big Short on the plane, right until the opening scene with strippers quickly ended the viewing. It wasn't that big of a deal, but I'm not going to sit next to a family and let that scene play out. I watched Concussion instead.

Sure thing. Upon landing, I check the Delta app and see the Rio flight hasn't taken off yet. It's delayed until 11:20. We land at 10:48. We pull up to the doors at 11:00. The app updates the delay now at 11:30. Great. I have 30 minutes to get from my seat to Terminal F. Thankfully we land in Terminal E instead of Terminal A like originally scheduled.

So I give the twins each a USA Wrestling pin and grab my things and … start standing. No one moved for 16 minutes. I finally clear the door of the plane at 11:17. Sprint down the hall, the escalators to the “Plane Train” and up to F3. This is also the point in time I realized I'm not a distance runner and my thoughts of trying to run a marathon a few years ago were plain stupid.

But I made it. Sat next to a guy from Seattle going to watch his buddy Nathan Adrian swim. Yes, the anchor leg on that swimming relay every non-swimming expert in the country is talking about. Then I watched Fastball and finished up The Big Short.

It's after midnight after we finally took off.

The dinner was horrendous, but the flight staff was nice. We landed and I made my way to the baggage claim on the change my bags made it — NOT A CHANCE. As I write this blog, I've been on hold with Delta baggage for 46 minutes (and counting).

Ken Berger is waiting with the ride company I'd set up. It's 10 a.m. We're off to the hotel. Hotel Atlantico Rio in Copacabana. We get settled, checked in and after some joking conversations with a group of United flight attendants who poked at me for flying Delta, I headed to my room. It's about 12:15 now.

This is a typical international hotel. Nothing fancy. Although the minibar is stocked and I'm not quite sure who's picking up that tab.

At around 2 p.m., our ride picks us back up and we head across town to get our credentials and “uniforms.” Yes, the staff here with Rio 2016 has a whole swag bag of stuff, including pants, shoes, socks, polos, slickers, jackets and a hat. The shoes look slick, but I probably won't wear them.

Oh, I've tried calling Delta. Got cut off about 30 minutes into the call with no answer on my stuff.

After an Uber back to the hotel and a quick unpacking, Ken and I head to dinner and stop at a place called Boteca de Garrafa. Good steak, killer sides, good portions and really tasty beer. We went there on a suggestion of an American judoka who is an Olympic nut. I didn't catch her name — or her dad's name — but they recommended it and it was fantastic. We'll probably eat there again.

I failed to mention this Uber was a bit wild. She had a TV in the car watching the Brazil-Spain basketball game. Olympic spirit, I tell you.

So after dinner, we walk down to the beach and see the judoka and her dad again. They're standing outside of the outdoor studio and Al Michaels is there live doing a report. Freaking Al Michaels? Yes. This is a bit of a geek out moment as a broadcaster, but I didn't geek out. It's Al Michaels. That's cool.

Heading back, I still have no luggage. No toothpaste, water, or mouthwash. Thankfully I always pack a spare pair of boxers and a t-shirt in my carry on when I check bags, just for this purpose. My socks are toxic and I'm going to donate them to science (fiction) after this trip.

That'll wrap up the first two days of the trip — no luggage, no answer, no deliveries from FedEx (that's another story) and no hope in sight there. Meeting at 10 a.m. tomorrow to prep for the 14th.