The Rio Blog: Around town in the same pair of clothes – August 10 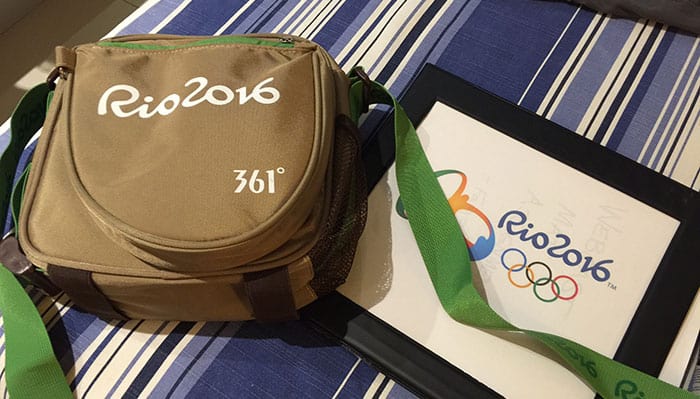 If Cliff Fretwell was looking for a billboard for his Compound Wrestling Club, he might have found the right guy — me. Now if Cliff only had a location in Copacabana, said billboard would have been put to good use.

So Wednesday came and went with little resolution to my baggage issue. It's apparently been inspiring, since Shane Sparks of the Big Ten Network and Trackwrestling.com tweeted about his impending travel to Rio, getting one over at my expense.

Rio! Wasn't going to have a carry on, but after @jasonmbryant losing luggage thought better of it. Thanks Lori. pic.twitter.com/uX8nsZRQaF

Anyway, I'm starting to scribble this down at 6:43 p.m., having spent three more hours today on hold with Delta Airlines trying to find a way to let them know my location so they can deliver my bags to the Hotel. If you're reading this — it's the Hotel Atlantico Rio in Copacabana. Google it.

So this morning, Ken Berger and I were going to head down to the operational headquarters for the workforce here in Rio. There are literally thousands of volunteers and staff in brightly colored shirts working everything here. Since Ken and I are part of the Sports Presentation Team, the gear we picked up on Tuesday would serve as our “uniform.”

Right now, a pair of 361 degree socks are clutch. Thankfully the spare pair of underwear and a t-shirt served me well. As for the shirt, well, it's been a blue Compound Wrestling Club shirt provided by my good buddy Fretwell that I've been sporting around Rio.

Ken and I met for breakfast, which was pretty good here at the hotel. I had the normal selection of tropical fruit, scrambled eggs, some ham and cheese, some super awesome flan (not the pocket flan, though) and some hot tea. I'm starting to do more on the hot teas in the morning after going through a meatgrinder of a post-season with the NAIA webcast and back-to-back PA gigs with the NCAA.

At breakfast, Ken ran into Peter Graves, who is kind of like the savant of skiing. He's been a coach, commentator and broadcaster — the guy knows his stuff. Graves would be the one conducting the announcing seminar Ken and I would be attending later in the morning. We hopped on the subway, went 14 stops and hit our stop and conducted our business.

Graves (no, not the actor) has been a fixture in the Olympic family for decades. This guys knows the ins and outs of production, presentation and most importantly for us, announcers. Ken is working with a guy named Sergio on the in-arena audio. If you've been to the NCAA's and heard the Live Sports Radio stuff, then you kinda get the idea. Ken is fluent in Spanish, Sergio is as well, so they're conferring in a non-native language to communicate. It's pretty wild.

Daniel Robin, the third member of the announce team and a two-time Olympic medalist, taking silver in both styles in 1968 and 1972 (one in each year), will be handling the French announcements. We signed our contracts, went over some do's and don'ts and headed back to the hotel after about three hours over in the workforce home base.

Upon returning, I elected to call Delta and put in the earbud. We then got a late lunch. Ken and Sergio opted to go down to Olympic Park and scope out the awards for the venue with judo, but I really needed to get some clothes. I couldn't for the life of me wear that Compound shirt any more. I can just hear Fretwell saying “Belly button lint funk” in my head right now.

After about two hours, we'd finished lunch and I was walking around Copacabana trying to buy some clothes. I'd found out that my luggage had arrived earlier in the morning, but I had no way to let Delta know about it — except call them. During that two hours, I walked around, purchased and tried on clothes and then — just like yesterday — at the two-hour mark, the call failed.

I'll let the graphic to the right explain my feeling at the moment.

Yeah. Then I tweet at Delta while buying pants in TACO (yes, I will return my man card when I return to the U.S., but for now, I'm wearing TACO pants — bite me). They provide me 10 of the 11 required digits of the same number that I'd previously been on hold with and disconnected.

I also discovered when you get foreign shirts, they vary — by section of the store! The very roomy GG (2x) shirt from one store is completely different from the skin-tight GG shirt from the one rack to the next. Oh well, I actually bought travel insurance for this trip and will be getting reimbursed for all of this. I learned a lesson — get the $40 worth of travel insurance. If your bags are delayed more than 24 hours, they cover stuff. So yeah.

It's now 7 p.m. local time and I plan on hitting beach volleyball with some of the U.S. wrestling training partners who are heading down this way. They're about an hour away via Uber to the West.

I'm still on hold (for a second time today). I found a Brazilian Delta number and got connected immediately. The woman on the other end of the phone is trying to connect me through the Brazilian baggage claim office (which isn't answering) and/or the U.S. line (which is what we've been on hold with for now 90 minutes).

I really wish United would be the hub in Minneapolis. I had great success with them and good status and upgrades. Delta has been a complete sh*tshow since we moved to them. We're in Minnesota, it's what we have to deal with if I do the amount of travel I do. After this trip, I'll at least hit a higher level of status and then maybe, just maybe, they'll treat me like a customer.

Also, because I'm part of the Rio 2016 Announce Team, that means I can be viewed as a representative of the Games, so I won't be making any statements on potentially controversial topics or issues while serving as a staff member in Rio in the media or on social platforms.

By the way, the main image today is the “man bag” provided to us. It's been quite functional.

Oh wait, it's a SATCHEL!