The Rio Blog: Thank you Rio and a night with trailblazers – August 23 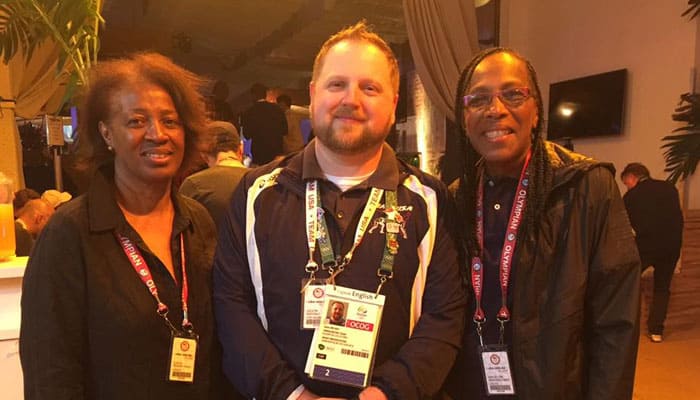 I totally guilt-tripped Kyle Snyder into letting me wear his medal. “So you know Varner let me wear his in London”

I'll go into a much more detailed breakdown of Rio when I get back to the United States, probably for Short Time, which I haven't recorded in nearly a month due to all the travel.

It's about 7 p.m. in Sao Paulo, Brazil and I'm waiting for my flight from here to Atlanta, connecting on to Minneapolis. There's so many things I want to break down, relive and explain from my perch up at the announcer's table.

Just finished having dinner with Steve Fraser, the former U.S. Greco-Roman coach and 1984 Olympic champion. We had a fine, elegant dinner at Pizza Hut. It was actually quite good — for an airport Pizza Hut in a foreign country.

For all the terrible media exposure Rio received from various press around the world, Rio put on one heckuva show. While there were some incidents I know of people getting pick-pocketed or mugged, the unfortunate thing is that happens in any big city, especially when there's in influx of out-of-towners. It's a bummer that stuff happens.

Let me say this for anyone who was concerned about my well being or anyone else's down here during the Games — it was fine.

Never once did I feel uncomfortable or threatened when walking around Copacabana. In fact, I probably walked around more by myself than I did in groups or in tandem. Copacabana had a true international feel to it. When I say that, I mean it reminds me of some of the great cities I've visited in wrestling over the years.

I think the best part about Copacabana was the food. I compared it to Istanbul with great little corner shops and cafes. They don't look appetizing, but they know how to grill things up. While Istanbul and Budapest (two of my favorite international cities) have the smell of kebobs and shawarma permeating the streets, Rio doesn't quite have that.

Even with my own personal hesitations having gone down to Rio in late January during the height of the Zika scare. I had a pregnant wife at the time too. Anyway, they got things done. Not everything was perfect as we saw on the media reports prior to the Games, but as it impacted me, everything was kosher.

Not sure who came up with this, but it's making the rounds.

Everyone was great — save that donkey Ryan Lochte.

You sir, suck. You made all Americans look bad.

Total number of mosquitoes I encountered in 16 days in Rio: 1
Total number of blown calls that impacted the wrestling competition: Well, more on that later.

As I mentioned in the open, I'll go into detail about my beer tour with Eric Sanders on my last night in town, meeting up with Oklahoman Clay Holly and his family, had dinner with some Virginia friends and met some new friends along the way at a brutally awesome steakhouse.

I'll also go into more detail about what the Kyle Snyder outcome meant and the days after Helen Maroulis's gold. This is essentially a placeholder blog. Note the photo up top.

There's one thing I want to talk about and that's the last night at the Games at the USA House. I had a chance to meet two of the most amazing trailblazers on the planet. Yes, the PLANET. (My unnecessary use of capital letters can be annoying). While at USA House on the 21st, I had a chance to meet a few Olympians and medalists from other sports. I also stumbled across two people who I have great respect and admiration for. I'm not a huge Track & Field guy, or as they say internationally, Athletics. As I was chomping on a hot dog, I see a man wearing a shirt that reads something along the lines of “TigerBelles” and then Tennessee State University.

I'm not going to be complete with this definition, but in the 1960s, the world of track was transformed by a group of women from Tennessee State University. They were known as the TigerBelles. The entire relay team was composed of runners from Tennessee State. You might have heard of Wilma Rudolph.

So quickly, I tell the man that I know about the TigerBelles. He goes “there's two of them right there.”

Boom. There's Edith McGuire Duvall and Madeline Manning Mims. Madeline was the Team USA chaplain. Her and Brandon Slay had a long conversation later that night.

I'd just taken a picture with former wrestler Nico Hernandez, who won a bronze medal in boxing. I talked to him about coming on Short Time. Then I get thrown right into the grips of a history lesson that this blog cannot fully explain.

What Duvall and Mims did in their time at Tennessee State and thereafter changed women's sports. It changed sports for people of color and it changed the world of running. Experts in that sport can go into greater detail. There's a few videos and documentaries out there about them. Here's a promo for one of them.

I honestly can't explain this all sitting at an airport gate. You'll just have to trust me on this — or do yourself a favor and research these trailblazing women. What they did for black women in sports in the 1960s has few equals, especially when you factor in the combination of civil rights for women and people of color.

I could ramble for days about their story, but meeting these two women was one of the greatest sporting experiences of my life.

That's all for today. I'm about to board. Wonder how many bad movies I can watch on this flight.