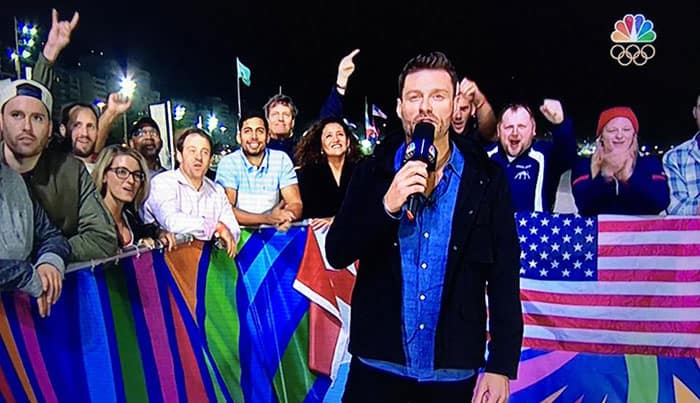 Picking up where I left off on yesterday's blog, I was heading to see Beach Volleyball on Copacabana Beach, about a mile and a half from where I'm staying. I met up with U.S. training partners Julia Salata and Becka Leathers to try to pick up tickets. While waiting for them, I ran into Dan Vallimont and some of his friends. His hair, while still a bit disheveled, is still dreamy (starry-eyed face).

Oh, before I even get to the evening, it's currently 4 p.m. on Thursday and I still don't have my bags. Delta called this morning around 10 a.m. and said they would deliver my bags today. Let's just say the underwear I bought here isn't exactly as comfortable as I'm used to. I'll just leave that there.

So once I finally found Becka and Julia, I also ran into Clarissa Chun, Richard Perry and Connor Medbery. They ended up getting into the game because Chun is like an Olympic rockstar. After opting to not try to get some tickets (because they were impossible to get), we stop at this little cafe to watch some of the volleyball, get some grub and maybe a tasty cold beverage (or two).

So where was I? Oh yeah. Steak sandwiches. Yes. Steak Freaking Sandwiches. It was not because I'd had various beverages that made me believe this was the best steak sandwich I'd ever eaten, because I started eating it before I had my first cold frosty beer of the evening.

Manoel & Juaquim was the place. Becka, Julia and I housed four of them. We ordered two as appetizers and they were cut into thirds. After one bite, I'm like “I'm ordering two more.”

Later, Becka had an experience with a bucket of nachos and then using it as a beverage carrier. Anyway. So after we finish up and eat there, we opt to head towards the giant television set that NBC erected on Copacabana Beach. This led to the first photobomb. We'd just run into Mike Quamme, a former North Dakota State wrestler and Minnesota native. He's with some friends and Alex Pirozhkov, Elena Pirozhkova's brother (well, one of them). Chris Willaert was notably not there.

Ryan Seacrest is hosting Olympic Late Night where he's interviewing people on the beach on live television for NBC. We set up in the area behind Seacrest for a 20-second promo he's got. Boom. We're in there. Julia and I totally tank the high five, but we snuck ourselves on TV with like 20 million people watching. Producer tells us that they'll go live in about an hour. That's about 1:30 local time. So we got time to kill, because come on, there were only like 50 people around the set, so we're going to exploit this television exposure for all we can.

So we think about the Irish Pub and then maybe decide that the next door place with the Swedes and the Norwegians would be cool. Too full. No place to sit. The winner is Rota 66. I order a couple of large Bohemia's (they're quite good) and there's some frozen drinks and there may or may not have been some vodka involved, but we're just going to blame the resident Russian native for that one (looking at you Alex).

Right around 1:20, we book it back across the street to the NBC set. What I know about working live television is it isn't easy. I've worked multi-camera shoots and used teleprompters. There's an art to it. I'd like to think I'm pretty good at it, but I'm nowhere close to how much of a pro Ryan Seacrest is. From a television perspective, the guy is impressive and probably one of the best in the world at what he does.

For the next hour, Julia, Becka, Quamme and the rest of the crew situated ourselves in the shots by knowing where the prompters were, since they're where the cameras are. Rocking a Team USA jacket I got while I worked at USA Wrestling, I'm in the middle of a ton of shots. Afterwards, one of the lighting guys would see me at a dive bar and go “dude, great trolling.”

Twitter, Snapchat, Instagram posts all over the place. Even a selfie with Olympic champion Kristin Armstrong, who we got to sing happy birthday to as well.

Here's the link to my Facebook photo album from Rio.

During the breaks, we do some light heckling of Seacrest, start clapping and chanting his name. Then I throw out an obscure reference of his appearance on the Cartoon Network show “Robot Chicken” — to which Seacrest replies, “I gotta get you on my snapchat.”

Once we're all done, Seacrest comes back over, puts Julia and Quamme on a snap as well as myself with the Robot Chicken reference. It was pretty freaking cool to be honest.

I also found out one of the interns for NBC wrestles. Because of his position, I'm going to keep his name out of this until the Games are over. He'll be a guest on Short Time after we're done here in Rio. But yes, there's a wrestler working for NBC in the trenches here.

Remember the judoka and her father I mentioned the other day? Ran into them again. So Aubri O'Connor and her dad are Olympic nuts, so they're here again. This time, they guided us to one last stop before the night ended. These little dive bars just thrive. Rio is a city that never seems to sleep. So much going on, so many people. Aubri has a friend from D.C. who works on the production team here for NBC as well. Come to find out, Kevin, aka Fluffy, is a Virginia native, so that's cool. Guy sports some wicked mutton chops and provided some interesting technical insight to the production of the show.

So now as we approach dinner time, I'm going to take a shower, shave, brush my teeth and wear my own clothes. It's Beach Volleyball for real this time.

And we'll be back to photobomb some more on late night. Rio rocks. Even without Chris Willaert.

Don't worry bro, Tokyo is only four short years away.