The Rio Blog: We’re living in our own Private Idaho with KARE11 – August 15 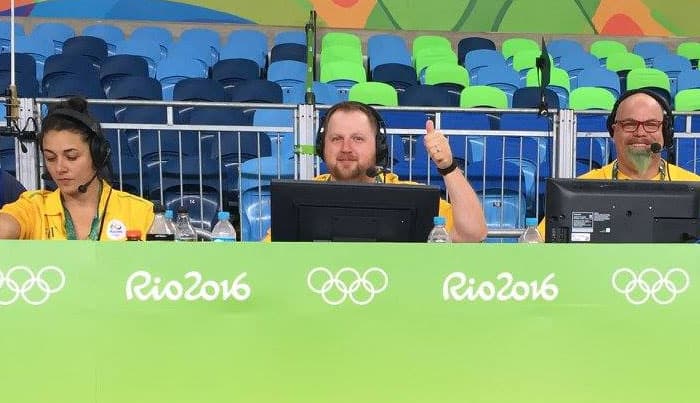 If you have any idea what the Private Idaho portion of the headline means, congratulations, that means you're most likely over the age of 36. I'm almost over that age as my 37th birthday is approaching on the 20th of August. It'll be the second birthday I spend out of the country. I spent my 30th birthday on a safari in South Africa with my then-girlfriend and now-wife Abby.

Kinda knew then she was a keeper.

So we've finished up two days of Greco-Roman wrestling and unfortunately for American wrestling fans, we got shut out of the medals in “the classic style.” Both Jesse Thielke and Andy Bisek won matches on Sunday, but Robby Smith and Ben Provisor were beaten in their first-round bouts on Monday and their opponents were beaten shortly thereafter, ending their day and the hopes of a medal.

If you want to read about the actual wrestling part of things, I'd recommend heading over to TheMat.com and checking out Gary Abbott and Richard Immel's stuff. Gary's covered the Olympics since 706 B.C. and this is Richard's first Games. My first Games four years ago in London were crazy memorable. Hopefully the U.S. gives BDI (and I don't mean Burundi) a reason to remember Rio.

Two days of wrestling is down, and that means two days of announcing and about 8 hours of travel to and from the hotel in Copacabana. On Monday morning, rather than take the train-train-bus-walk route we did the day prior, we took a cab and used a handy VAPP pass given to us by Rio 2016 to be able to get a few places taxis typically aren't allowed. This put us a short five-minute walk from the workforce check-in, which is at the front of the Olympic Park, and then a 10-12 minute walk over, around and through to Carioca Arena 2. In case you're wondering, a “Carioca” is a Rio native. If you were in Poquoson, which is my hometown in Virginia, that would be like calling someone a “Bull Islander” if they were a native. Although in “Bull Island,” there's a few rules of actually being a “Bull Islander” and one of them has to do with either having one of five common last names or being at least third-generation born and bred. My family is basically Poquosonites and/or move-ins, depending on which Bull Islander you ask.

So enough about my hometown, since I'm a move-in and move-out.

My announcing team is Marcelo Portinari of Brazil and Daniel Robin (roe-bin — he's French). Both were Olympic wrestlers. Marcelo lives in Rio, while Daniel lives in Canada and was a double silver medalist in Mexico City in 1968. Yes, double, meaning he was silver in both styles.

Daniel is handling the French announcements, Marcelo the Portuguese and I'm handling the English. After our first day, the presentation team shifted up how we were calling things, so I had a bit more to say on Day 2 than on Day 1. I've done my homework with these foreign pronunciations, so I felt the second day was awesome. Speaking of awesome, the Cuban behemoth that is Mijain Lopez joined an exclusive club tonight. Lopez won his third Olympic title after coming out and throwing a two-time world champion from Turkey on his head in the first minute of the match. Lopez is the most dominant and impossible-to-score-on athlete in the world if he decides to be. Based on my situation with Rio 2016, I'll leave that for those of you in the know to discuss. I'll just leave that over there.

But I've got to backtrack a bit, because I don't feel like re-working the entire blog to get to this. I'm burying the freaking lede here folks. Maybe that's why I don't work for a newspaper anymore.

So a few days ago, Dave Schwartz of KARE11 in the Twin Cities (an NBC affiliate) threw out a tweet on his way back to the hotel about #AskDaveAnything and my buddy Don Stoner, the SID at Augsburg, threw this one out there.

@Dave_Schwartz If you go to Olympic wrestling, say hi to @jasonmbryant … lives in New Brighton, he's the PA announcer for wrestling.

This essentially means I have to buy Don dinner when I get back to Minnesota. Why?

Well, Schwartz followed up after that tweet from Don and came over to start the second day to talk about my announcing gig and things related to it.

In all seriousness, I'm thankful for Don, who has become a good friend over the years of us covering Division III wrestling, felt it was notable enough to let the local media know about it. My “hometown” paper did that story last week. I didn't really want to go “Hey Dave, lookie me! Lookie me!”

Dave and got a chance to talk a bit, with the interview and following. Nice dude and I enjoy his work, considering I see the guy on TV a few times a week, I've gotten pretty familiar with it. Probably gonna have to watch KARE11 a tad more. Then again, I'm in Rio and I won't see the segment until after this blog is posted. So let's hope they do me a solid!

Oh, the food here is awesome. I tweeted on Sunday night this place reminds me of Istanbul with all it's corner cafes. They don't look like places you'd want to eat, but when you sit down with a great big pile of rice and veggies and a succulent piece of chicken or an amazing steak (everyone, and I mean everyone, eats steak like grows on trees here), and the open air and a cold beverage (last night, it was Coke Zero — seriously, it was), it's just blissful.

That's all I've got for Monday night.

Oh, and Private Idaho was played a few times the last few days. I might have to bring that back into my rotation. Julia Salata noticed it immediately. They also played Love Shack, but we haven't encountered karaoke places like Tashkent just yet.