Throwback Blog: When Ben Askren SHOULD have won the ESPY for Best Male College Athlete 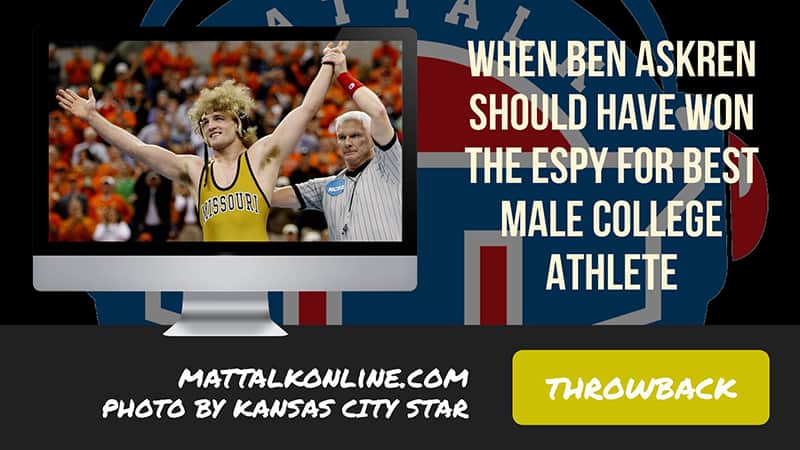 Editor's Note: The following was a post I wrote on the blog I ran at InterMat and cross-posted to ArmchairGM back on July 11, 2007. I’d contributed a few wrestling stories to Armchair that year, but after reading some of the rants of some regular (read: non-wrestling) sports fans, I figured I’d make a point about why Ben Askren should win the ESPY Award for Best College Athlete. It's kind of relevant again in the wake of Baker Mayfield taking the honor when a three-time NCAA champion and World champion (psst, Kyle Snyder) wasn't even nominated in the category. The story is below.

Two of the four will be making big money on the professional stage next year, while Smith was a fifth-round draft pick. He’ll still garner a sizeable income.

The last of the four will be working on a graduate degree and have the title of “volunteer” attached to his job title. There will be no big signing bonuses for one of the four – and that one is Askren.

Here’s a few reasons why Askren, a two-time NCAA champion and four-time finalist for the University of Missouri “should” win. However, we’re realists in the wrestling world. We know the mainstream masses won’t give the afro-laden Askren a second-thought.

Askren was recently named the Big 12 Male Athlete of the Year. That’s right; he won the award from the conference in which Durant competed. So if there was a “rational” thought in this voting process, Askren would win by process of elimination, right?

So the Associated Press’ National Player of the Year was behind a wrestler in the Big 12.

If I were Askren and the conference tells me I’m the best male athlete – over the National Player of the Year — I’d be waiting for sponsorships and shoe contracts to come rolling in. Maybe a Gatorade plug or something with Snickers. But wrestlers don’t get that type of love from the big companies. Sure, Askren’s endorses Brute/adidas wrestling, but that doesn’t bring in the seven-figure endorsement deals 19-year-old seven-footers are entitled to these days.

This brings us to Troy Smith, who shouldn’t be considered either. Why? He wasn’t even the Big Ten athlete of the Year, but to his defense, did walk away with probably the most prestigious trophy in all of college sports.

The Heisman Trophy winning quarterback wasn’t named the Big Ten/Jesse Owens Male Athlete of the Year. That honor went to – a wrestler.

Minnesota heavyweight Cole Konrad, who, like Askren, is a Wisconsin native and went undefeated his last two years won the Big Ten’s award for Male Athlete of the Year. Score one for the little guy (and by little guy, I mean wrestling, not Konrad, he’s a very big guy.)

Askren gets the nod with an assist from King Cole.

Actually, now that I think about it, give Konrad another assist since Oden also plays in the Big Ten and wasn’t even his school’s own nominee for Best Male Athlete. In case you’re wondering

So there’s only one clear-cut winner at the conference level in ESPN’s voting pool, which concluded just days ago.

Reasons why Ben Askren should win the ESPY for Best Male Athlete.
(Note: This list was compiled in 2007, it's out of date for 2018 with its statistics of historical relevance)

For Smith, Durant and Oden, it’s really hard to match the career of Askren on just stats alone. Durant and Oden might have had a shot at the argument, had they competed all four years.