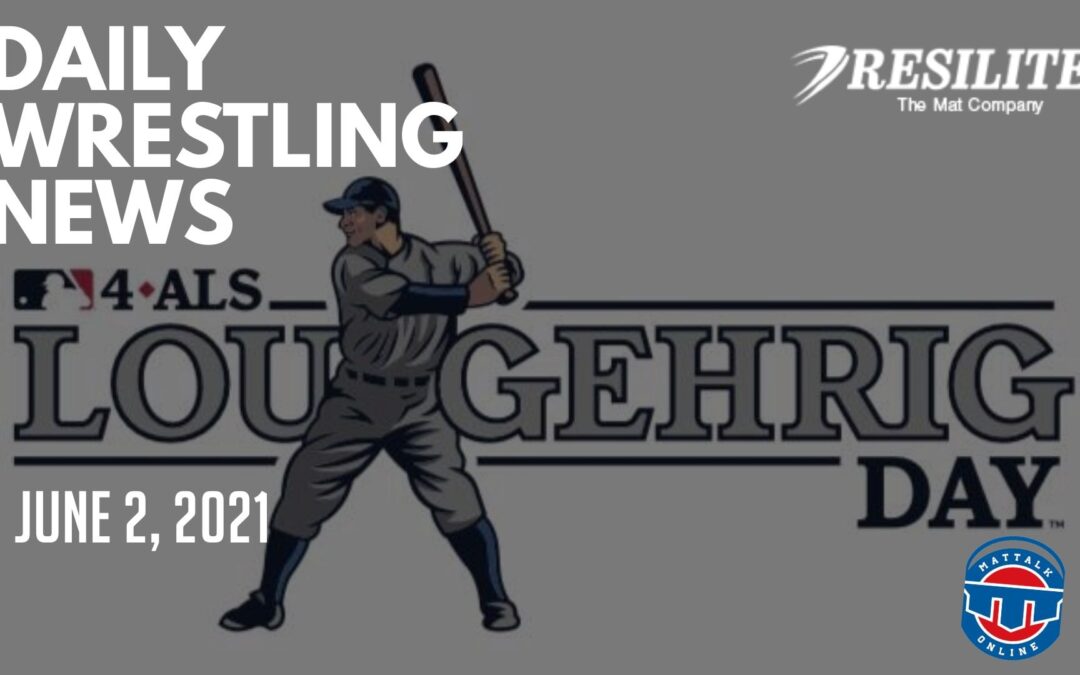 On this day: June 2 is the first Lou Gehrig Day. According to Major League Baseball, the day is significant since it's the date Gehrig started his legendary career with the New York Yankees and the date of his passing at the age of 37. For more information on Lou Gehrig Day and information on ALS research, read up.

Steveson ready to take on the world in Tokyo | kare11.com

He talks the talk and he definitely walks the walk “Now its like a signature,” Gable Steveson laughs “Ya'll wanna see a backflip?”

It’s not enough to hate losing. Every wrestler, or at least every wrestler who is driven by high-reaching aspirations, despises defeat and hopes to avoid all of the feelings by which it is accompanied.

Hawaii's Clarissa Chun of the USA wrestling program finds herself in the middle of the Olympic Games firestorm, a mega-event that's supposed to galvanize not polarize.

Courtney Woods from Intermat announced on Tuesday via Twitter that Tommy Hoskins will be transferring back to his home state and Ohio University.

Our own Willie Saylor broke news tonight that 2021 Olympic Trials winner Jordan Oliver would be changing his training situation.

Gary Abbott’s career was at a crossroads in 1988. He and his former coach, Hall of Famer Carl Adams, had just shuttered their magazine, Wrestling Masters, after five years of business.

Sushil Kumar's arrest exposes the underbelly of wrestling; gets a lock on nexus with organised crime – Money Control

Sagar Rana's murder points to a series of illegal activities involving former wrestlers, and an alliance with gangsters in search of a continuous supply of gun-toting, deal-brokering, cash-carrying muscle.

Coe, Erdener and Lalovic set for re-election to ASOIF Council – Inside The Games

Sebastian Coe, Uğur Erdener and Nenad Lalovic are set to be re-elected to the Association of Summer Olympic International Federations (ASOIF) Council after the deadline for nominations passed ahead of the body’s General Assembly.

For Schuylkill Haven native Sammy Julian, a longtime teacher, coach and wrestling official – it's an honor to be invited onto the biggest stage in the sport not just once – but twice.

Another former Missouri wrestling star has accepted a fight against internet-celebrity-turned-professional-boxer Jake Paul.

Hannah Taylor and Ligrit Sadiku have patiently waited a long time for the opportunity to compete in their hometown.

With the 2021 Pan-American Championships now in the rearview following a very successful two days for the American squad, eyes are beginning to turn towards Warsaw.

Finding a way: Wrestling coach Kelly an inspiration at Lourdes | The Blade

Three simple words have helped guide Lourdes University wrestling coach Dock Kelly III through tough times when all the cards are seemingly stacked against him. Find a way

A couple of big name transfers made their destinations public Tuesday night which happens to be the first time since March 2020 that recruiting restrictions were lifted. Both, Austin Gomez and Nathan Traxler, have competed in the NCAA Round of 12 during their impressive careers. They now have new homes.

The United States is sending 22 athletes, including 12 men’s freestylers, seven women’s freestylers and three Greco-Roman athletes, to Warsaw, Poland, to compete at the Ziolkowski, Pytlasinski and Poland Opens, June 8-13. The tournament serves as a UWW Ranking Series Event for the 2021 World Championships in Oslo, Norway.

Over the weekend, the Pennsylvania RTC sent 24 wrestlers to the U23 World Team Trials in Lincoln, Neb. Nearly one third of them brought home hardware, as seven PRTC wrestlers reached the podium.

IAwrestle is pleased to announce that award-winning journalist Elias Johnson has joined the content team after six and a half years at WOI-TV in Des Moines. The former anchor of Good Morning Iowa has a strong wrestling background having competed at the high school and college level.

InterMat Wrestling – Tyler Lillard: A Battle Beyond the Mat

Despite hearing the name and undoubtedly seeing his talent on the mat, it was learning about his personal life that truly intrigued and inspired me. Tyler Lillard, a 17-year-old junior at Wyoming Seminary Prep, is wise beyond his years and has overcome more in the last nine years than most could ever imagine.

Johnny, J Rock, Johnson is the owner of RAW 241 wrestling club, based out of the Garden State, New Jersey. J Rock is one of the top youth and high school coaches in the country. He’s worked with the likes of Brett Matter, Jordan Burroughs and Darrion Caldwell. J Rock’s passion for wrestling is insane.

It's no secret that collegiate and elite-level wrestling demands a tremendous amount of discipline, dedication, and unmatched work ethic from its athletes.

Loras College wrestling head coach TJ Miller announced the hiring of Jeren Glosser as the next assistant wrestling coach for the Duhawks. Glosser comes to Dubuque from Oskaloosa, Iowa after serving as an assistant coach at William Penn University and brings a wealth of experience as a former wrestler at the University of Iowa.

Former Parkside wrestler Dan Argueta is set to compete on the 29th season of The Ultimate Fighter, which will feature episodes on ESPN+ starting on June 1.