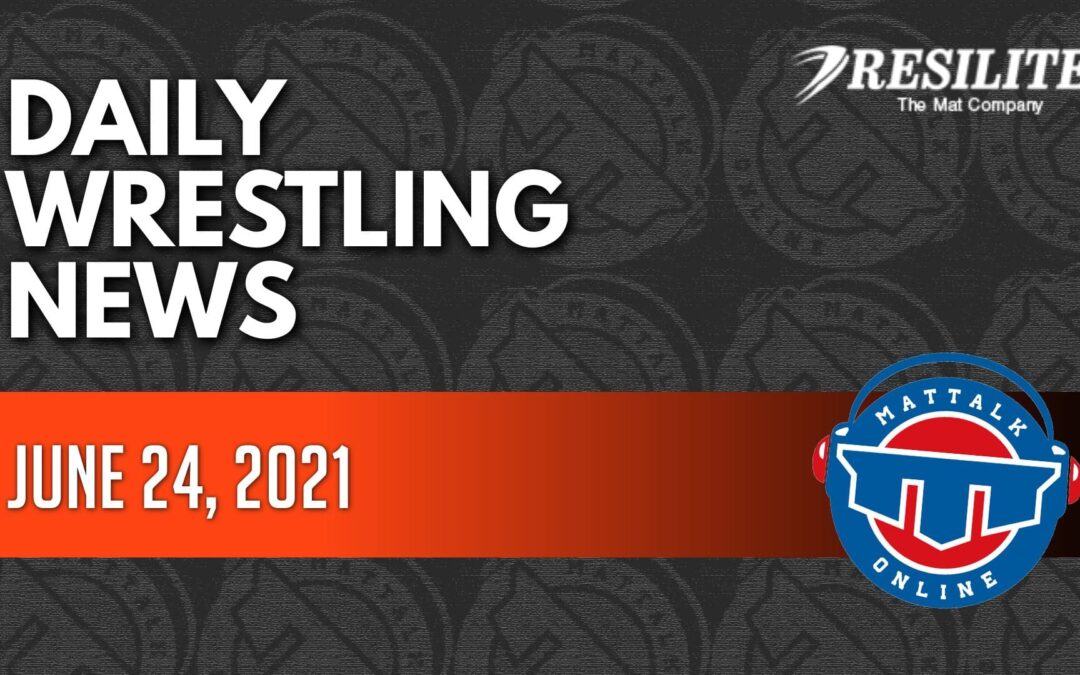 Get this delivered to your inbox daily by signing up at mattalkonline.com/news.

Brad Gentzle cares about his wrestlers. Or maybe that’s CAREs.

From being a two-time All-American for Minnesota-State-Moorhead wrestling to know getting his chance to be a heavyweight champion in Bellator, its been quite the journey for Tim Johnson getting to the top of the sport.

Earlier this month, news broke that the Tennessee Titans had signed World silver medalist Adam Coon as an offensive lineman.

Looking back at Fargo in 2019: Notable records from the last time under the dome | Rokfin

The last time Sandy Stevens called for wrestlers to clear the mats in Fargo came in 2019. With the 50th Junior Freestyle championships set to kick off this July, let's look back at the notable achievements the last time wrestling filled the Fargodome.

2021 Division I All-Americans & Who Placed in Fargo | Rokfin

One of the unique aspects about digging through the history of the USA Wrestling Junior & 16U Nationals is the number of athletes who place at the NCAA Division I Championships that spent time competing inside the Fargodome at least once during their high school careers.

40 Of The Top Performances At Junior Duals – FloWrestling

The Junior Duals are a team-centric event, of course, but they’re also a showcase of top individual talent.

It takes a highly-motivated student to balance studies and playing a sport in college. Rarer still is the college student who has the opportunity to play not one, but two sports.

Next stop for Vulcano: Hall of fame | Canon-McMillan | observer-reporter.com

He is responsible for making a paperless wrestling tournament, no small feat for anyone. But Frank Vulcano has embraced technology and the sport has prospered.

He was an average 5-foot-3 wrestler at Kennard-Dale. He never qualified for a PIAA tournament, never really won anything of note in high school. But Stefanowicz joined the U.S. Marines out of high school, grew seven inches and packed on 70 pounds, and gradually morphed into a wrestling force.

But his callouts have not been just to those within the wrestling community. His callouts this week have been to two notable athletes who have competed in mixed martial arts — Jake Hager and Bobby Lashley.

Wrestling-Five to watch at the Tokyo Olympics | Reuters

Five wrestlers to watch out for at the Tokyo Olympics:

The NCAA Playing Rules Oversight Panel on Tuesday approved wrestling rules changes that allow the referee to correct timing errors when that referee has reasonable knowledge of the correction that needs to be made.

Back in 2019 The Massapequa Chiefs put the entire state on notice by winning the Division 1 NYS Dual Meet Championship. In one day, they defeated Section 9 Champions Minisink Valley and Section 11 Champions Sachem East in pool play.

We’re deep in the offseason right now, so I thought I’d throw in a mailbag this month and answer some of your questions from Twitter.

Summer is slow in the DIII wrestling world, so this post will focus mostly on Division I athletes. Several states have laws allowing college athletes to profit from their name, image, and likeness (NIL) going into effect July 1st. The NCAA Division I Council is meeting today and surely has NIL on its agenda.

Greg Jones is one of the best collegiate wrestlers of all time. He won NCAA titles as a freshman, junior and senior. In total, Greg lost just 4 college matches during his tenure at West Virginia. After coaching in Morgantown for the better part of a decade, Greg moved to Florida’s Blackzilians gym to teach wrestling to MMA fighters. Today, he and Henri Hooft run an elite MMA gym, where the likes of Logan Storley, Michael Chandler and many other champions train.

Unprecedented times took on a new meaning this past wrestling season. Overlooked are the unimaginable circumstances that piled on for the Clackamas Community College Cougars.

As one of the most intriguing stories in college wrestling, Andrew Sparks jumped onto the scene in 2021 during his first season in the Maroon & Gold. Kicking off his collegiate career with a top-10 win, Sparks posted an impressive 8-1 regular season record before a postseason riddled with injuries derailed what could have been a promising end to the young Gopher's freshman campaign.

Matt Azevedo has been the head wrestling coach at Drexel University since 2011. On his watch, the Dragons have made multiple appearances in the national rankings and had more than 30 individual NCAA Wrestling Championships qualifiers.

The Champ Bo Nickal is back on Baschamania as he joins Cenzo and me as we talk about the latest in NCAA vs athletes and Bo's future in MMA & wrestling. Cenzo and JB also talk about the rundown of some recent wrestling news. Bo joins the show 21 minutes in.