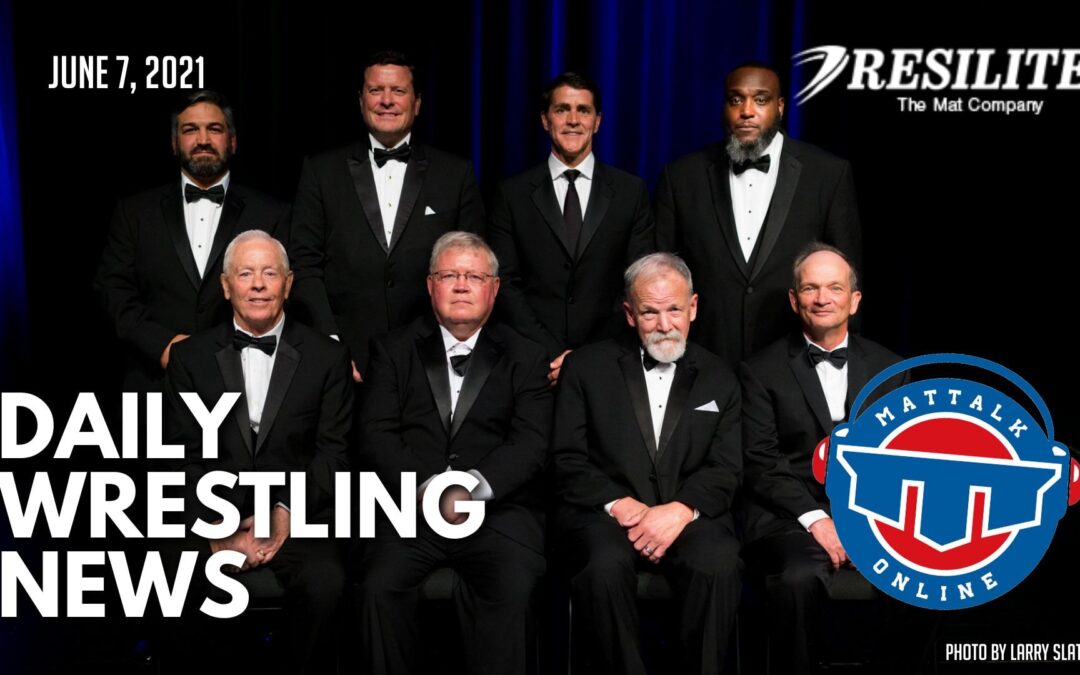 On this day, my niece Ryan was born. Happy Birthday!

Just a day after Cody Chittum, the top recruit in the class of 2023, committed, another massive recruit came off the board. Super 32 champ Christian Carroll has announced that he'll be joining Mike Poeta and company at Illinois.

The National Hall of Fame Honors Weekend wraps up with group induction ceremony for the Class of 2021 – TheMat.com

The National Wrestling Hall of Fame’s Honors Weekend concluded this evening with the official induction ceremony for the Class of 2021. The eight individuals entering the Hall of Fame were initially scheduled to be inducted in 2020 but had their ceremony pushed back over a year due to the pandemic.

On the second day of Honors Weekend, The National Wrestling Hall of Fame added four new members, Bruce Burnett, Mark Lieberman, Dremiel Byers and Bill Zadick, who were all inducted as Distinguished Members earlier this afternoon.

Big blow for OCU announced on Twitter this Saturday as Junior Greco World Team member and 125 pound starter for the Stars Billy Sullivan will be transferring.

Stillwater, the defending 6A state champions, don’t look like they’ll be taking their foot off the gas anytime soon. After winning the team title in 2021, they graduated two state champions in Carter Young and Teague Travis.

When last we saw Cael Sanderson and his Penn State wrestlers, they were the talk of the tournament after the NCAA Championships concluded in St. Louis.

Showing Gabe Blessinger a bracket only incites worry. It’s like playing a montage of plane crashes just after a first-time flyer pulls that polyester seatbelt across their lap. Wrestlers are supposed to be like sprinters, supposed to be these cocky specimens who could be paired against Superman and think they’re kryptonite.

The difference between the Adam Coon and Tim Tebow signings – ProFootballTalk

With the Titans giving a shot to a former wrestler on Friday, some of the many Tebowmaniacs are arguing that Tennessee’s unconventional move is no different than Jacksonville’s decision to sign former baseball player Tim Tebow . It’s very different.

Pounding out the hits. Mooresville High School’s wrestling team managed to do just that when also engaging in the most meaningful segment of its remaining late-season surprising spring schedule.

With the USA Wrestling Nationals just a month and a half away, Batavia freshman Casper Stewart is gearing up for a deep run at 132 lbs.

Over the past two years, Culpeper High School wrestler A.J. Marshall has been able to pin just about every challenge that’s come his way to the mat.

In the latest development, the international wrestling body, United World Wrestling (UWW) has charged the Wrestling Federation of India (WFI) to pay a hefty fine of Rs 16 lakh for a doping offence committed at an international event.

Indian wrestler Sumit Malik has been provisionally suspended after failing a dope test, meaning he is likely to miss the upcoming Tokyo Olympics, local media reported.

Former University of Michigan wrestling standout Adam Coon has been signed to the Tennessee Titans' 90-man roster, the organization announced Friday (June 4). Coon, a three-time NCAA heavyweight All-American, had joined the Titans the previous day at their training camp, where he will compete on the offensive line.