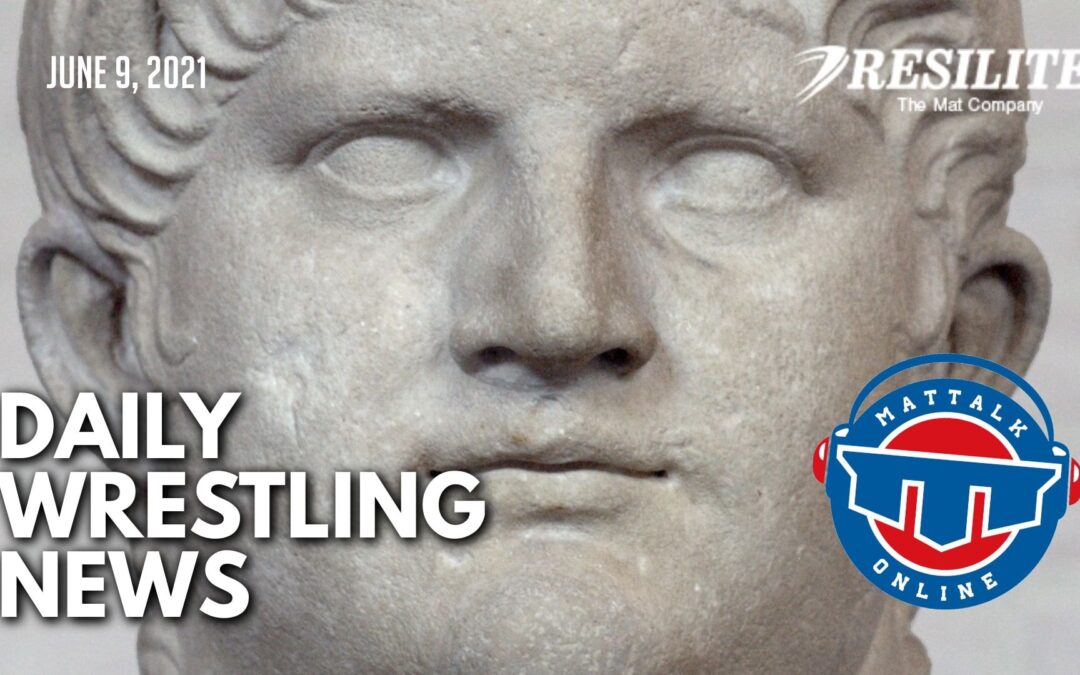 On this day in 68, (yes, sixty eight), Roman Emperor Nero commits suicide, imploring his secretary Epaphroditos to slit his throat to evade a Senate-imposed death by flogging. Nero is a common crossword puzzle answer as well. That's mainly the reason it got today's nod.

Two class of 2022 big boarder high school teammates at Baylor School in Chattanooga, TN, will go on to be teammates in college. #33 Garrison Dendy and #58 David Harper jointly committed to Mark Branch and co. at the University of Wyoming Tuesday afternoon.

Olympic-bound Indian wrestler Deepak Punia on Tuesday pulled out of the Poland Open here to avoid aggravating his left-hand injury that he carried into the last Ranking Series event before the Tokyo Games.

Late on the night of 4 May, shots rang out in the Indian capital, Delhi, at a sports stadium famous for wrestling.

A judge is expected to decide Wednesday whether a former NCAA wrestler convicted of beating up one woman and sexually assaulting another at his Coachella Valley ranch will be allowed to post bond pending the results of his appeal.

Mohammadhossein MOHAMMADIAN (IRI) had to wait until the final bout of the day but it was worth it as he successfully captured the gold medal at the Poland Open Ranking Series event in Warsaw.

One of the top available juniors in the nation, Zeke Seltzer (Cathedral, IN) made his college decision public late Tuesday evening.

Illini wrestler Mike Carr has announced that he will be using his fifth year of eligibility to return for the 2021-2022 season.

The 2021 Last Chance World Team Trials Qualifier is set for July 16, 2021, at the FargoDome in Fargo, N.D. The event will precede the 2021 Junior and 16U National Championships. Fans can watch all the action live on FloWrestling.

The Canadian junior wrestling team will be back in action for the first time since 2019, competing at the Junior Pan-American Championships in Mexico.

Potentially playing in the NFL was in the back of Coon’s mind as he pursued his Olympic dream on the wrestling mat. Coon was a three-time All-America wrestler at the University of Michigan, but hasn’t played football since his senior year at Fowlerville in 2012.

Cumberland Valley School District found a replacement to lead its wrestling program and it's someone with familiar ties to the Eagles.

Couldn't make it to the annual Honors Weekend at the National Wrestling Hall of Fame? We've got you covered as the Hall of Fame Legends Podcast has released the full induction ceremony from June 5, 2021 in Stillwater, Oklahoma.

Valencia and Pantaleo win gold, and Green takes silver on day one of the Poland Open – TheMat.com

Three out of four Americans are bringing home medals on the first day of the Poland Open. Alec Pantaleo (70 kg) and Zahid Valencia (86 kg) both claimed titles, while James Green finished with a silver medal. Kollin Moore, the fourth American, finished fifth at 97 kg.

Mukiza tested, not deterred, on way to Iowa State – The Predicament

Aime Mukiza was in tears. The past year left many in the same position, but Mukiza was at a place that was supposed to provide him focus and direction — the wrestling mat.

According to a report from The Oregon Wrestling Forum on Rokfin, the Sooners have picked up a transfer from Oregon State University.

Pantaleo and Green set to square off in rematch in 70 kg finals, Valencia goes for gold at 86 kg and Moore wrestles for bronze at 97 kg in the Poland Open – TheMat.com

The American men’s freestylers looked sharp in the opening round of the Poland Open. Four Americans competed this morning, with three making the finals and one battling back to compete for bronze.