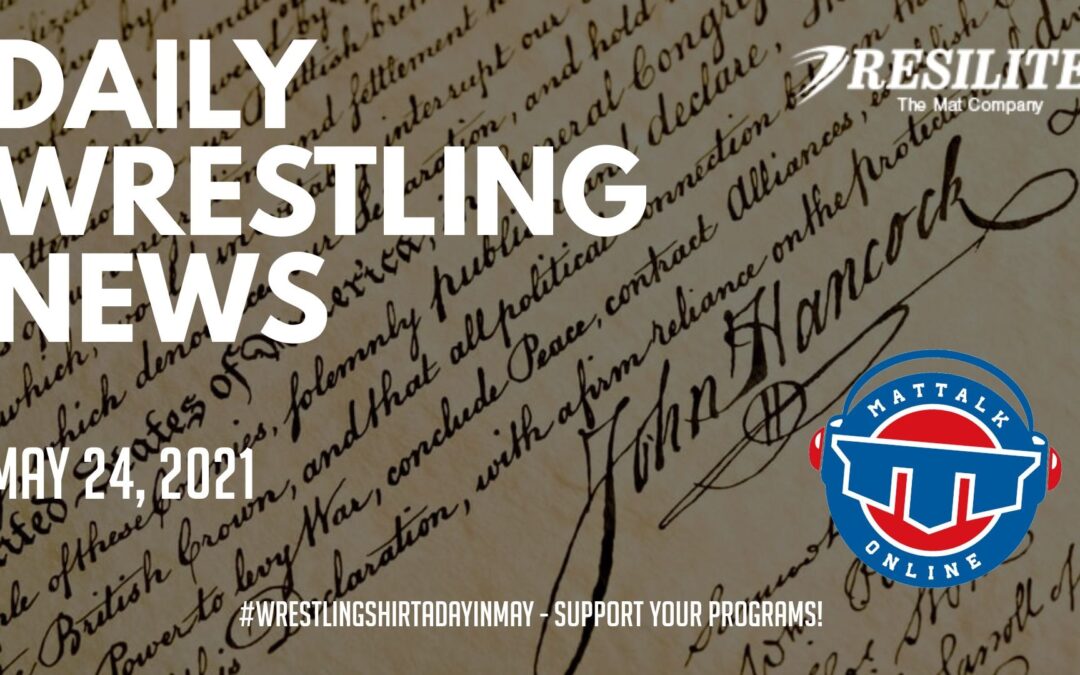 On this day in 1776, John Hancock was unanimously selected as the President of the Continental Congress. He would later be linked to a series of college football bowl games in El Paso, Texas and insurance, for some reason. According to Family Guy, Hancock wasn’t his given name.

If there was a World Wrestling Day highlight reel to be made, Artur SARGSIAN (RUS) slamming Giorgi KATSANASHVILI (GEO) for four points on Sunday would undoubtedly be part of it.

Two-time Olympic medalist Sushil Kumar was arrested on Sunday in connection with the case involving the murder of a 23-year-old wrestler in Delhi. The decorated wrestler and his associate were remanded to 6-day police custody.

Stanford Athletics is currently accepting applications for the position of Head Coach, Wrestling

It took two months for Drew Bennett to find a new home, and he found it south down Interstate 380 for the next steps in his collegiate wrestling career.

Biglerville’s Levi Haines has a fair explanation for why Penn State’s wrestling program has been nearly automatic in churning out champions. Haines has a better idea than most because he has the same motivations and a mentality for the sport where results are the furthest thing from his mind.

Wisconsin’s Braxton Amos is packing his bags a little sooner than expected.

Challenged with the lack of proper sparring partners in India and a knee injury, a rejuvenated Bajrang Punia is looking forward to the European tour planned by the Wrestling Federation of India.

CJ LaFragola made headlines in both high school and college as a multi-sport athlete.

‘It was just joy': Six years in the making, girls wrestling in Nebraska looks to build on breakthrough vote | High School Wrestling | journalstar.com

Six years ago, Les Painter had a girl who liked wrestling but didn't want to compete against boys, so he went to the Nebraska Scholastic Wrestling Coaches Association board members with an idea.

Ashok Kumar, the only Indian referee to officiate in wrestling in Tokyo Olympics – Sportstar

Ashok Kumar will be the only referee from the country to officiate in wrestling matches of the Tokyo Olympic Games. He was named in the list of officials released by the United World Wrestling (UWW) on Thursday.

Tonight, the Pittsburgh Panthers received an important commitment from the #43 overall wrestler in the Class of 2022, Mac Stout (Mt. Lebanon, PA). Stout, a 2020 PIAA AAA state runner-up, did not compete in the 2021 postseason after suffering an injury at the Powerade Tournament.

Jake Deitchler shocked the wrestling world in 2008 when he qualified for the US Olympic Wrestling Team while just 18 years old. Jake went on to wrestle at the University of Minnesota before his career was cut short due to concussion related injuries. Today, Jake runs Grynd Wrestling Academy. I freaking loved this podcast folks.

Check out the age-group results from 2021 U.S. Beach Nationals in Jacksonville, Fla. – TheMat.com

On Thursday, at Atlantic Beach in the Jacksonville, Fla. community, champions and medalists were crowned at the U.S. Beach National Championships.

JUSTUS THROUGH VIOLENCE: The World Teamer Everyone Is Talking About – Five Point Move

Olympic and World silver medalist Brandon Paulson is responsible for what has become a canonical catchphrase: “Love the fight”.

The fan vote is in, and the finals have been set for USA Wrestling’s interactive 32-athlete bracket featuring the best Men’s Junior Freestyle competitors of the last 50 years of the Junior Nationals.

On day three of the four-day wrestling extravaganza in Jacksonville this weekend, the inaugural Spartan Nationals individual folkstyle championships were held for youth age-groups 8U through Junior, with both a boys and girls division.

It was men’s freestyle day for the Masters Nationals championships, and 15 athletes were able to win double titles, with freestyle victories today after winning in Greco-Roman on Friday.

The top bracket semifinals of the 50th Junior Nationals men’s freestyle fantasy bracket includes the first six-time Junior Nationals champion Sean Hage of Georgia (with three in each style), against a tough Oklahoma star with a knack of winning the big matches, Johny Hendricks.