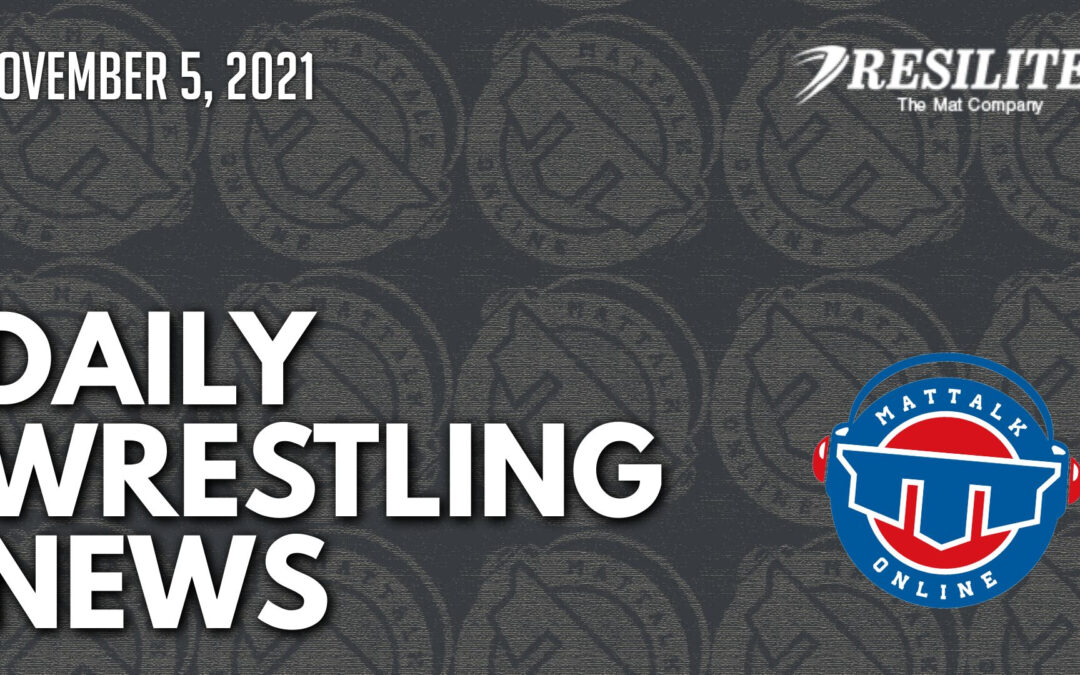 Welcome to Short Time Shots, the audible version of Jason Bryant’s College Wrestling Wrap Sheet, I am he, Hall of Fame Wrestling Writer, Broadcaster and Announcer Jason Bryant and this is a look at five things from the day in college wrestling on November 4, 2021.

The official start of the 2021-22 campaign is finally here and the Always Aggressive Podcast is back to get you ready for the Boilermakers' season-opening duals. Purdue opens Saturday at Drexel University and Rider University.

No. 21 Pitt-Johnstown Takes Down No. 5 West Liberty in Wrestling Opener – University of Pittsburgh at Johnstown Athletics

The Pitt-Johnstown wrestling team finally returned to the mat Thursday night for its first dual meet in 21 months due to the COVID-19 pandemic.

Gardner-Webb wrestling opened its 2021-2022 season in style Thursday night, rolling to a 30-3 win over Belmont Abbey in Paul Porter Arena.

As a kid, Hasrat JAFAROV (AZE) imagined becoming a world champion for Azerbaijan like many greats from the country. But growing up in a small district of Goranboy, Azerbaijan, it was difficult to find heroes to look up to. But he still followed his elder brother to the wrestling gym and slowly fell in love with the sport.

Aaron Pico has had quite the unique start to his MMA career. After a successful Olympic career in freestyle wrestling, he made the move to MMA and signed with Bellator, to the chagrin of many combat sports fans.

The Hokies begin competition slate on Sunday at Southeast Open

This week, we talk with Iowa’s Spencer Lee about training for the upcoming season and more. Below, Lee talks about many topics, including being a complete student-athlete and talking to fans about life outside of wrestling.

Zach Hanson of Lakeville North has committed to wrestling for Stanford University in 2023.

Emily Shilson became the first U.S. woman to win a U23 World gold medal on Thursday, winning via fall in her finals match at 50 kg to become the champion at the 2021 U23 World Championships. Kylie Welker, at 76 kg, also had a standout performance, winning a bronze medal.

After a year in which the wrestling program was slated for discontinuation, several alumni and friends have come together to create three new coaching endowments and help sustain the future of the sport at Stanford.

St. Cloud State, the ten-time defending NSIC Champions, was the unanimous choice to win the league in the NSIC Preseason Wrestling Coaches' Poll.

Weird but true fact: There are 34 college wrestling programs competing in the state of Iowa this winter. Seriously.

Marano to wrestle for bronze at U23 World Championships in Belgrade – TheMat.com

Kayla Marano will wrestle for a bronze medal Friday night at the 2021 U23 World Championships.

The U.S. men’s freestyle team received its draws for the 2021 U23 World Championships in Belgrade, Serbia.

Greco-Roman wrestling finishes up at the U23 World Championships with group two finals – TheMat.com

Greco-Roman wrestling at the 2021 U23 World Championships completed on Wednesday night as Group Two of Greco wrestling wrapped up its finals. Russia captured the team title with 190 total points.

The Appalachian State wrestling program has an insatiable hunger for beating the odds.

Rutgers wrestling head coach Scott Goodale discusses wrestle-offs, competing in front of fans and the upward trajectory of the athletic department ahead of RU's first event of the season Sunday against Binghamton, Cleveland State and NJCU.

The University of Michigan wrestling team is entering its milestone 100th season, and head coach Sean Bormet counts himself fortunate to have been around for his fair share of them.

DI wrestling is back and will be in full-force this weekend as 26 duals and a host of open tournaments are on the slate. Since it can be difficult to figure out where and when to watch all of these events, InterMat has put together a list of all of the live-streamed events occurring this weekend. Below are the dates/times and how to watch each match.

The Southeast Polk to Iowa pipeline stays flowing. For years we have seen many of Southeast Polk’s best trade in their black and yellow Ram singlets for the black and gold of Iowa. Today, Tom Brands pulled another nationally ranked talent out of Pleasant Hill to strengthen the future of his squad.

Like I said, Week 1 is always the hardest. Not every wrestle-off has been completed, there are still wrestlers who have an unknown starting weight, and tournaments are back with assumed, but ultimately unknown entrants.

The Pulse: Is Brandon Cannon The Comeback Wrestler Of The Year? – FloWrestling

A rare, aggressive tumor left Brandon Cannon unable to walk several months ago. On Saturday, the Colorado prep made a triumphant return to the mat.

A breakdown of the biggest dual in the opening weekend of NCAA Wrestling: #10 Ohio State vs #18 North Carolina.