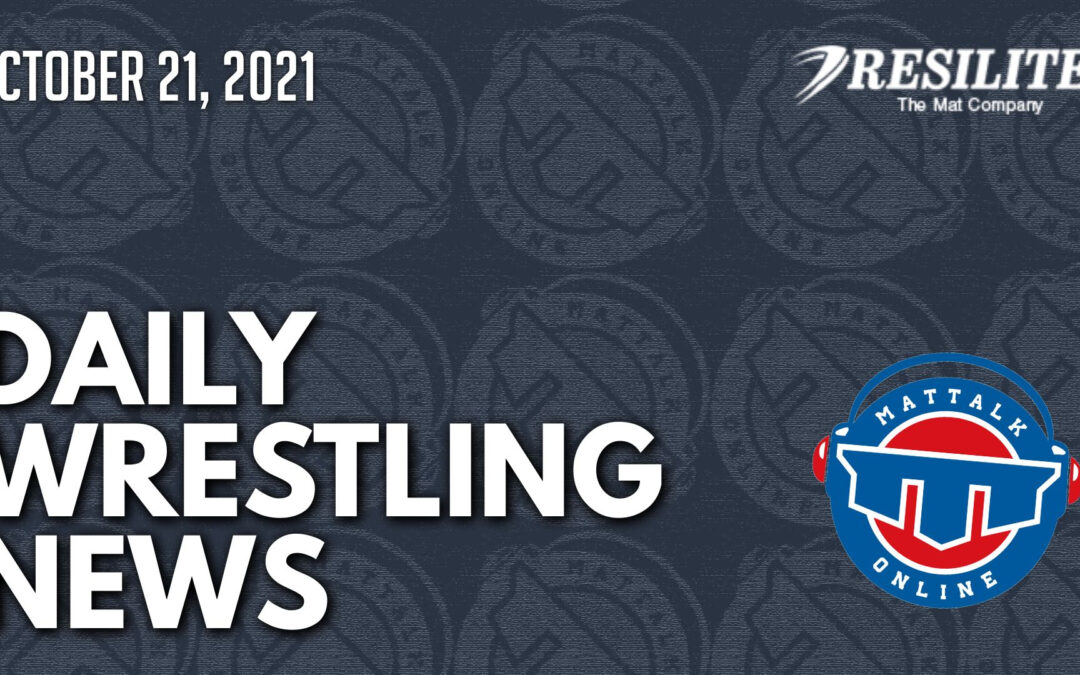 Army West Point assistant coach Scott Green is in Minnesota checking out the wings and weather and the local wrestling talent. He stops into the Mat Talk Online Speakeasy Studio to talk about his career and coaching experience and what it's like coming back to his native New York.

Since 1988, Gary Abbott has served as the media face of USA Wrestling, traveling to major wrestling events in the United States and around the globe, including eight Olympic Games, dozens of senior and age-group World Championships and 38 straight NCAA Championships.

You've seen the field and studied the pre-seeds. Here's your complete Super 32 preview with predictions for each weight.

Tokyo Olympics medallists, wrestlers Bajrang Punia and Ravi Dahiya, have decided to skip this year’s senior Nationals in Uttar Pradesh and Commonwealth Championships in South Africa to prepare themselves for their much-awaited return to the competitive mat through one of the United World Wrestling’s (UWW) three ranking series scheduled between February and June 2022, TOI has learned.

Welcome to the NWCA’s latest venture to help our favorite sport. Glenn Gormley and Kevin Hazard outline their effort to bring statistical analysis to wrestling. Mat Stats is the NWCA’s attempt to bring wrestling up to speed with so many other sports by incorporating stats.

One of the nation’s most prestigious events each fall is the USA Wrestling Brian Keck Memorial Preseason Nationals, set for Hyvee Hall in Des Moines, Iowa, October 29-31. This year’s event is shaping up to once again be highly competitive in all of the age divisions.

The Wrestling Federation of India (WFI) is looking to change its Olympic selection process and will discuss it on November 12 at the Annual General Meeting.

Hiram competes this year for the first time since 1987.

Minnesota West CTC wrestling coach Randy Baker has one returning wrestler on his roster. And he couldn't be more excited.

Longtime Iowa wrestling publication The Predicament to close down after 50 years of high-quality coverage – TheMat.com

A major voice within wrestling for a half-century will close down, as the respected publication The Predicament, will cease to publish. This publication has covered our sport in wrestling-crazy Iowa, helping promote and build the sport at all levels.

Jeremy Hunter is the assistant coach for the University of Illinois. He’s been with the Fighting Illini since the early 2000’s and has coached the likes of Kyle Ott, Jimmy Kennedy and Jesse Delgado. Prior to Illinois, Jeremy was an NCAA champion and 3x All American for Penn State. In high school, Jeremy was a Pennsylvania legend, winning four PIAA state titles.

The United States had a strong performance on the second day of men’s freestyle at the Veterans World Championships on Wednesday, securing nine more World medals, including three more individual champions.

Five home dual meets and visits to several tournaments that were not held in 2020 due to the COVID-19 pandemic highlight the 2021-22 Cal Poly wrestling schedule announced Wednesday.

The University of Northern Iowa wrestling team will host seven home events in the 2021-22 season.

Recently, we have had a lot of questions regarding purchasing or the renewal of InterMat Platinum subscriptions. I'm sorry an explanation like this hasn't been posted sooner. The back end of the website is no longer equipped to handle new subscriptions or to extend and renewal current ones.

Pennsylvania made the jump to 18 girls wrestling schools on Monday night with the addition of Milton, which was preceded Monday night by Seneca and last week by Newport. Milton and Seneca were the first schools from Districts 10 and 4, respectively, to approve a girls wrestling program.

The Pennsylvania Wrestling Coaches Association hosted its Hall of Fame induction ceremony in Boalsburg for both 2020 and 2021, and long-time Sharon High Coach Dave Ciafre was inducted.