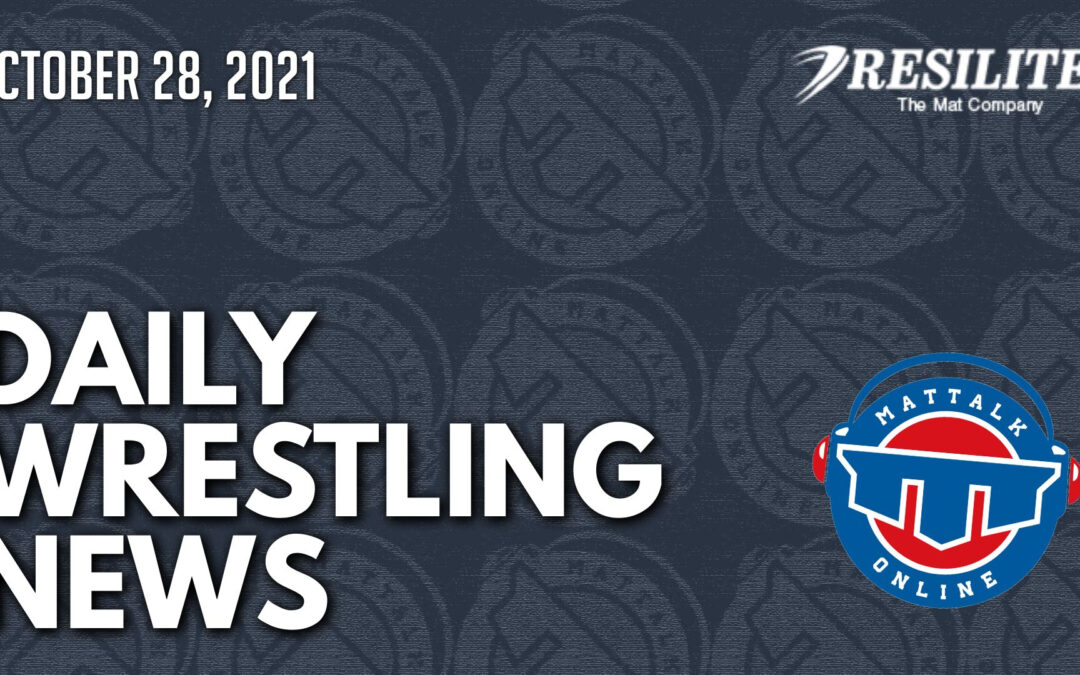 The first Kansas Collegiate Athletic Conference men’s wrestling media day took place on October 26. With the addition of Avila and Friends, the KCAC will be sponsoring men’s wrestling and a qualifying tournament to the NAIA National Championships the first weekend in March in Park City, Kansas, site of the last two NAIA wrestling championships.

Videos from IAWrestle at the University of Iowa's Media Day.

Anchored by four returning NCAA qualifiers from the 2021 season, including Andrew Alirez, who missed the tournament due to injury, the Northern Colorado Bears will look to continue to build off their strong recruiting in recent years and aim for podium finishes at the Big 12 and NCAA tournament.

At the 2015 NCAA Championships, Michigan State bottomed out with -0.5 total team points. That is not a typo. Roger Chandler was hired the following offseason, and will start his sixth year as the Spartans’ head coach when the’ 21-22 season begins.

Bassett took home a silver medal at the Super 32 Challenge with a loss to New Jersey's Anthony Knox in the 106-pound finals.

They’re all back: University of Iowa wrestling returns 10 starters from national title lineup | The Gazette

Skylar Hattendorf and several more of the nation's top girls high school stars shined Sunday in Greensboro at the Super 32.

The Iowa wrestling program holds an end-of-the-year banquet after every season. It’s often a celebration, where coaches hand out awards and honor their team and individual accomplishments from the past year.

Defending champion Hawkeyes are in it together | Iowa | wcfcourier.com

Spencer Lee figures the Iowa wrestling team has some unfinished business to take care of this season.

At Iowa Wrestling Media Day Wednesday, the Hawkeyes made it clear that last year’s team national championship didn’t diminish their appetite for success this season.

The top 113 pounder in the nation, Braeden Davis, has released a list of his final five schools.

When the time came for Jahi Jones to make a decision about what to do after graduating from Oxon Hill High School in 2015, the senior was debating between Morgan State University and University of Maryland.

Ohio , represented in Greensboro North Carolina over this past weekend. Finishing with ten placers total. One wrestler in the finals at the high school division!

On this week's episode of Mocs on the Mic presented by SmartBank, host Chris Goforth talks with wrestling head coach Kyle Ruschell.

The National Wrestling Hall of Fame announced its Class of 2022, featuring Iowa State wrestling legend Jake Varner as one of four Distinguished Members set to be inducted.

The National Wrestling Hall of Fame announced former Badger wrestler and coach Andy Rein as a distinguished member of its Class of 2022 on Wednesday.

Sara McMann, a 2003 LHU graduate and 2017 LHU Athletics Hall of Fame inductee is part of the National Wrestling Hall of Fame Class of 2022. She was chosen as a Distinguished Member for the Modern Era.

FORMER MVC WRESTLER HAS BEEN INDUCTED INTO THE WRESTLING HALL OF FAME | KMMO – Marshall, MO

A former Missouri Valley College women’s wrestler, Clarissa Chun, has been inducted into the Class of 2022 National Wrestling Hall of Fame.

On the latest episode of Mat Chat, David Mirikitani talks with Kevin Jackson, USA Wrestling's National Freestyle Developmental Coach who was just announced as an addition to the University of Michigan wrestling coaching staff. Mirikitani and Jackson discuss many topics related to coaching and the current state of wrestling.

The United States will send an impressive women's freestyle team to the U23 World Championships in Belgrade, Serbia next week. The tournament will take place November 1-7, as the U.S. team features plenty of young talent set to hit the mat.

Earlier this month in Oslo, Norway, G’Angelo Hancock (97 kg, Sunkist, world #5, 5PM #1) earned World bronze by coming up with three victories, the last of which at the expense of Germany’s Peter Oehler.

Huskies Have A Formula For Success That Works – The Guillotine

Lots of passion in this one folks! Rock Harrison (@rockreax) is an ACC and ESPN wrestling analyst. Rock wrestled at the University of Virginia, where he finished 3rd in the ACC. Prior to his time at UVA, Rock was a two-time Maryland state champion. Rock is also a D-1 official.

Nicholas Coco has been named the head coach of the Hunter College wrestling program.

Millikin was predicted to narrowly win the 2022 College Conference of Illinois & Wisconsin (CCIW) wrestling title based upon the results of the CCIW's annual coaches' poll announced Wednesday.