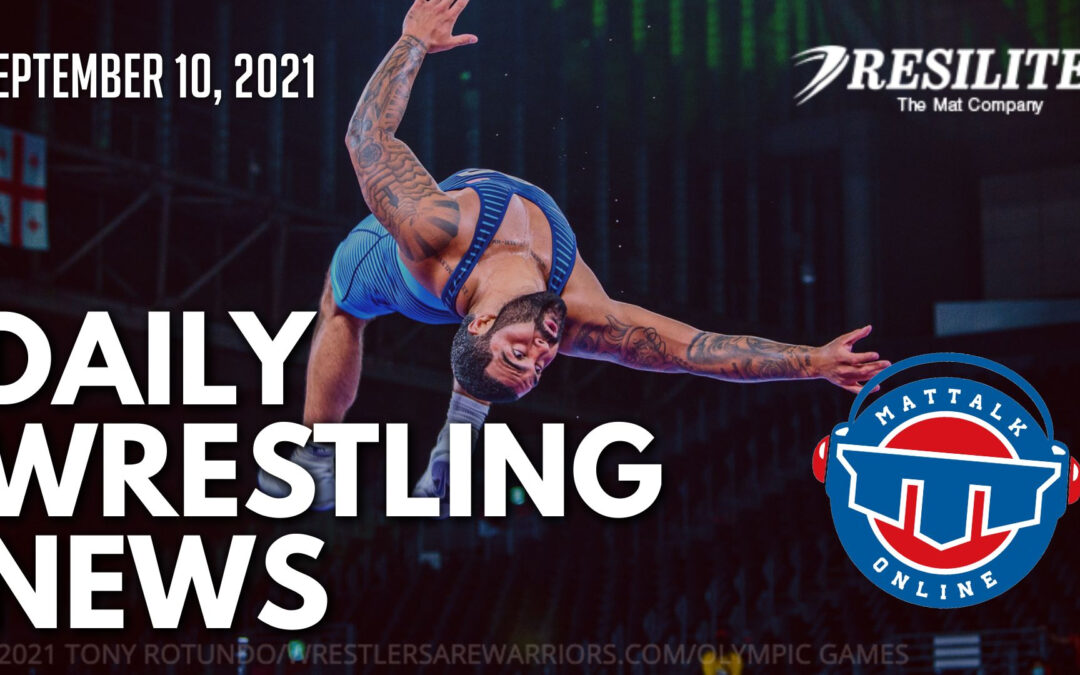 Terry Steiner, the current U.S. National Women’s Freestyle Coach, will come On The Mat to talk about the Olympic Games and the upcoming U.S. World Team Trials, which are set for Lincoln, Nebraska on September 11-12, 2021.

The hay will be in the barn, as the wrestling world says, this Saturday and Sunday at Pinnacle Bank Arena for the Team USA Senior World Team Trials.

Steveson is expected to finish his senior season and graduate with a business degree. At that point, he'll become a full-time performer for World Wrestling Entertainment.

Jordan Burroughs has been the model of consistency throughout his senior-level wrestling career.

Drew Foster is on the cusp of a major breakthrough at the Senior level of wrestling.

The Oskaloosa school board approved the hiring of Derek Moyer as the new high school head wrestling coach this week.

How many 275-pound men do you know who can do a backflip?

Phil Davis can certainly understand why Olympic gold medalist and NCAA Division I champion Gable Steveson would sign on with WWE.

34 men, Army strong, are ready to roll with easily one of the Nations toughest slates. The Cadets, in a scheduling oddity, have exactly the same number of home visits as a dead man.

Michigan wrestling star Myles Amine accomplished a lot in the year 2021. In the shortened wrestling season amid COVID-19, Amine finished 3rd at the NCAA Tournament for the third time in his career, and first time at 197 pounds.

Wrestle Like A Girl (WLAG), a 501(c)3 non-profit organization with a mission to empower girls and women using the sport of wrestling to become leaders in life, announced its first campaign titled “She Can Wrestle”, which will include a Celebration Gala and Sports Empowerment Festival, to be held at the U.S. Olympic & Paralympic Museum, October 22 and 23, 2021, in Colorado Springs, Colo.

61kg Is Full Of Dream Match-Ups At The Trials – FloWrestling

The world team trials will take place September 11-12 in Lincoln, Nebraska. In this article, we’ll break down the 61kg bracket, take an in-depth look at each potential match-up and how they determined the seeds.

Over the weekend, rumors surfaced that Olympic gold medalist and 2021 NCAA champion Gable Steveson had signed with the WWE. Since the NIL was enacted on July 1st, it didn't necessarily mean that his days at the University of Minnesota were finished.

This weekend, at the Senior World Team Trials in Lincoln, Neb., there will be competition in six weight classes for a spot on the 2021 U.S. Senior World Team in women’s freestyle, which will compete in Oslo, Norway, October 2-10.

Gavin O’Connor, the director of the 2011 movie Warrior starring Tom Hardy, announced that he’s developing a TV series loosely based on the movie that will star former Oklahoma State wrestler and UFC Champion Daniel Cormier.

The Trine University men's wrestling program has named Ryan Clark as their new assistant coach for the upcoming season.

The Drury Panthers will open their sixth season of intercollegiate wrestling on Oct. 29 when they host an intra-squad dual, then will start the regular season on Nov. 7 with the Dan Harris Open hosted by Baker University in Kansas.

Former Minnesota 184-pounder Owen Webster has joined the Gopher Wrestling Club RTC, as announced by the club on Thursday morning.

Gopher Wrestling Club is heading to Lincoln, Neb., this weekend to compete at the 2021 Senior World Team Trials in Pinnacle Bank Arena, where four club members will look to punch their ticket to the World Championships in Oslo next month.

Four current members of the NC State wrestling team and two alums will all be representing the Wolfpack Wrestling Club at the 2021 World Team Trials this weekend in Lincoln, Neb.

Virginia Tech Wrestling sophomore, Andy Smith, and Tech wrestling alum, Ty Walz, are headed to Lincoln, Nebraska for the 2021 World Team Trials held from September 11-12. Winners of the tournament will secure a spot to the 2021 World Championships in Oslo, Norway from October 2-10.

Olympic Gold Medalist and Golden Gopher heavyweight Gable Steveson will be returning to Minnesota for his senior season to defend his NCAA national title as announced on Thursday morning.