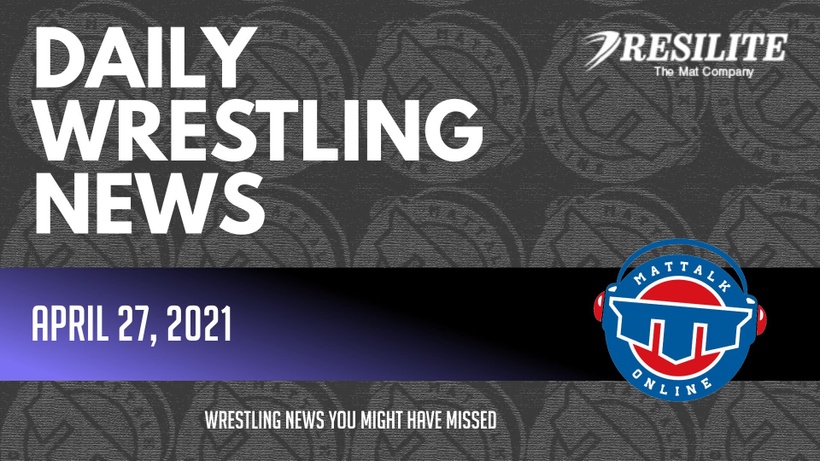 R.J. Mitte's breakout role as an actor came with his portrayal of Walter White Jr. in the hit series Breaking Bad. Mitte's still been working as an actor and now the sport of wrestling has come to his front door in the new film Triumph, which gets released to 200 theaters nationwide on April 30.

The Al and Josh Show Podcast – Catchup Time – The Guillotine

On Saturday, April 24th, the National Wrestling Hall of Fame, Minnesota Chapter held their 19th annual banquet and ceremony and inducted nine new members and honored two from the 2020 class who have contributed significantly to Minnesota Wrestling and beyond. The celebration was held at the Holiday Inn Conference Center in Austin, Minn.

Should the 2021 Cadet World Championships set for July in Budapest take place as planned, the United States will come locked and loaded with a fresh group of skillful, hungry competitors ready for the challenge.

Yianni Diakomihalis is a 2x NCAA Champion for Cornell University and is one of the best freestyle wrestlers in the country at 65kg. He recently took 4th at the 2021 Olympic Trials and will be gunning for his 3rd NCAA title during the 2021/2022 season. This interview took place four days before the 2021 Olympic Trials and was recorded for Tokyo Dreams, the 5-part vlog series that we produced.

With so many changes in the high school wrestling season this year, TheMat.com will research and publish, on a regular basis, an update on the 2021 state high school champions for both boys and girls.

Bo Bassett was thrilled to win the right to represent the United States in the Cadet Greco-Roman World Championships in Hungary, but that wasn’t the main prize the Bishop McCort Catholic seventh-grader had his eyes set on in Wisconsin Dells, Wisconsin, this weekend.

A York-Adams League wrestler is a national champion.

UFC fighter Chris Weidman gave an update on the broken leg he suffered during his fight at UFC 261 this past weekend. On Monday, Weidman posted an Instagram video from a hospital bed, revealing he broke his tibia and fibula in his right leg after throwing a kick against Uriah Hall on Saturday in Jacksonville. He detailed the rehab process and when he can start training again.

Shortly afterward, the Santaniellos learned their grandmother Patty Santaniello – the mother of their father Vin Sr. – had passed away, according to an Instagram post by Vincent Santaniello Jr. Sunday.

P’burg wrestling coach, another teacher jailed on charges they made threat for tenure vote – lehighvalleylive.com

Phillipsburg High School’s head wrestling coach and another longtime math teacher at the Lopatcong Township school were arrested Monday and charged in a scheme where a threat was made to expose embarrassing information unless a school district official “took action consistent with their demands to influence a tenure vote,” Warren County Prosecutor Jim Pfeiffer said Monday night.