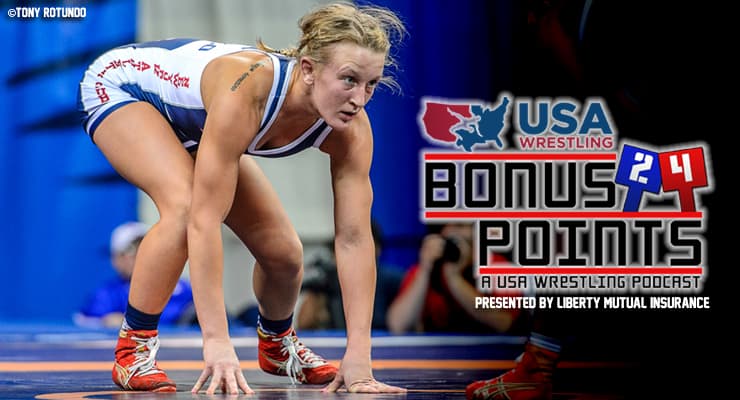 Augello won the 2016 U.S. Olympic Team Trials held in Iowa City,
Iowa on April 10 with wins over Candace Workman, Erin Golston,
Alyssa Lampe and Victoria Anthony. The 48 kg weight class was not
qualified for the U.S. to compete at the Olympic Games at the time
of Augello's victory in Iowa City.

In order to qualify for the Olympic Games Augello needed to place
in the top two at the 1st World Olympic Games Qualifier held in
Ulaanbaatar, Mongolia on April 23. She posted a 3-1 record in
Mongolia to finish in second place and accomplish her qualifying
goal.

Augello is currently a two-time WCWA national champion for King
University with two years of eligibilty remaining. She was a 2011
Cadet World champion and a two-time Junior World Team member.

Topics of discussion include electing to compete at 48 kg, the
journey to an Olympic berth, her life journey on and off the
wrestling mat and much more.

Listen to previous episodes of the show on the USA Wrestling Bonus Points Archives or by
subscribing on your favorite podcast listening application.