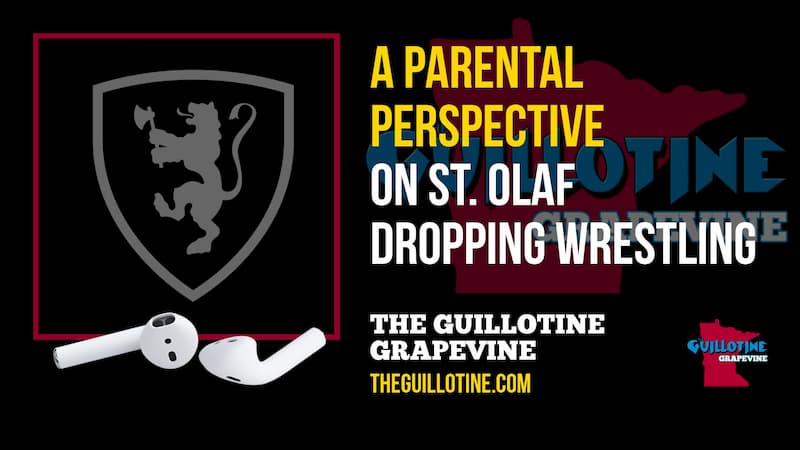 This is part one of a series on the news surrounding the drop of St. Olaf wrestling.

What level of a responsibility should a college have to take care of its students? That’s the question Florida’s Melissa McGlynn has for the entire St. Olaf College administration.

By now, the Minnesota wrestling community knows that St. Olaf College in Northfield, Minnesota announced it would discontinue wrestling at the end of the 2019-20 season. This announcement was released after business hours on Friday, October 18.

I’m Hall of Fame wrestling writer and broadcaster Jason Bryant, and this is a special series of The Guillotine Grapevine about the impending loss of the St. Olaf Wrestling Program. Today’s episode takes the parental perspective as I talk with Melissa McGlynn of Florida. Her son Robbie is a freshman this season at St. Olaf and came to Northfield to wrestle.

The saying silence is golden has been used in many different forms over the years. One I remember was from AMC theaters back in the 1990s. In the case of St. Olaf College, silence is golden is becoming the rallying cry from the school’s athletic and academic administration.

When the news dropped on Friday, the timing was deliberate. The Friday afternoon news dump is designed to mitigate response during business hours. On Monday morning, me and many other wrestling fans and specifically St. Olaf parents and alums went looking to Athletic Director Ryan Bowles and school President David Anderson for answers.

After two requests from Bowles were shot down, as he declined the opportunity offered to answer the athletic administrative side of the story, I tried Anderson. Messages for Anderson’s office weren’t declined – they weren’t answered. Also unanswered was a request to Facilities Coordinator Judy Tegtmeyer.

To be honest, St. Olaf wrestling has not been good for a while. A dismal win-loss record in dual meets and a small roster size. The program still been in the top 20 in recent memory. It’s not very hard for a Division III wrestling program to get good quickly. All it takes is two good recruiting years. The value comes with Sean Ahrar, an Iranian-born U.S. military veteran who has served as the program’s head coach for the past 15 years. That’s also a part-time position. Ahrar has no paid assistant by the school and operates on what’s been reported as a $25,000 a year budget. I have to go on those numbers, since as a private institution, St. Olaf is under no obligation to provide anyone, other than themselves, those numbers.

Ahrar is firm, a man of strong convictions and a very no-nonsense demeanor. He cares about his athletes, as evidenced by working full-time hours for a job that pays him less than a student might make at the nearby Taco John’s in Northfield.

Ahrar is also convincing. His athletes believe in him. But what’s also important is the parents also believe in him as someone who can teach and coach their sons. So when the very thing these student-athletes came to school for, wrestling, gets cut, it’s logical they’d want answers.

They aren’t getting any as Bowles and Anderson, and essentially they’re sticking to the silence is golden motto.

Now, we get a parent perspective and how a school isn’t just cutting a program, it’s cutting off the parents of tuition-paying students from around Minnesota and the country.

We hear from McGlynn and get some information from another parent, John Ridgway. All that on part one of our special Guillotine Grapevine series covering St. Olaf wrestling.