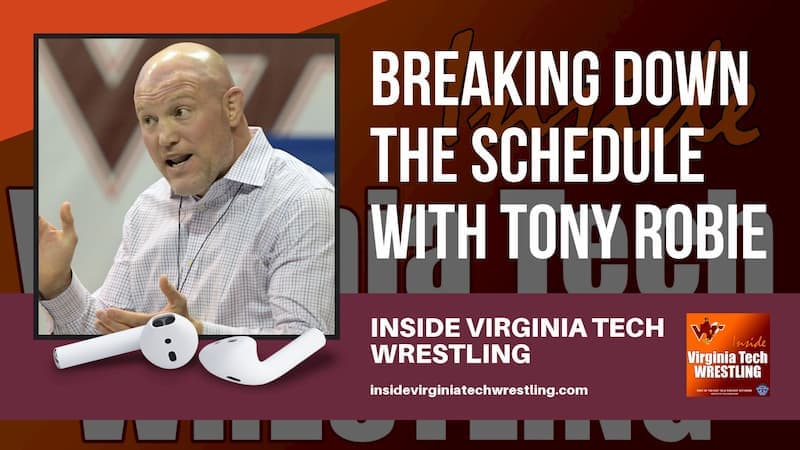 It's Episode 88 of Inside Virginia Tech Wrestling, welcome back again #HokieNation, Today we are talking about the 2019-20 wrestling schedule with head coach Tony Robie.

Before we get to that, a few updates to make you aware of. Mekhi Lewis finished fifth at the Continental Cup in Russia, his first senior-level freestyle tournament at 74kg, while Ty Walz finished with a bronze medal at 97kg at the same event.

Thoughts on both Mekhi and Ty's performance in Russia while representing Team USA and the Southeast Regional Training Center?

Last episode, we brought in new volunteer assistant coach Jared Haught, a three-time All-American for the Hokies during his career. What's it been like to work with Haught now in a coaching role vs. the relationship with him as an athlete?

Now to the schedule, first, we see that Virginia Tech comes in ranked across the board by Trackwrestling, Flowrestling, W.I.N. and The Open Mat. We still haven't seen the Coaches Poll, AWN or InterMat as yet.

Thoughts on the rankings, which at this point, is almost universally a tournament-scoring rubric.

Now to the schedule. The first time Hokie fans will get a chance to see the team compete is on October 25 at 7 p.m. at Cassell with the intrasquad. Again, the intrasquad, 10-15 years ago, wasn't as big of a thing as it is now. Back then, it was Lehigh, Oklahoma State, those types of programs doing the intrasquad thing. Now, the majority of Division I programs are doing something like it. What's good about it?

You waste no time getting into the teeth of college wrestling, facing off with Missouri in Blacksburg at Cassell on November 2, the kickoff weekend of college wrestling. You've wrestled the Tigers in the early part of the season the last few years, but why the opening weekend?

The Southeast Open is again a spot where Hokie fans can get a glimpse of a good portion of the team. This one's in Roanoke and let's talk location, differences, similarities on this event which takes place a day after the Missouri dual.

It was recently released that on November 10 against Northwestern, the first Mat on the Mound will take place at Virginia Tech's baseball facility, English Field at Atlantic Union Bank Park. It was either last year or the year before, we saw Missouri and Illinois do an outdoor dual at a softball stadium. Weather permitting, what was the thought process behind doing this with the baseball field?

Ohio State will host the Hokies at their new wrestling facility, the Covelli Center, on November 17. Again, this is an opponent who has been consistently on the schedule. There's a pipeline of Ohio kids who come to Blacksburg and how much of this is to make sure Hokie wrestling continues to grow roots in Ohio and how much of it is getting that national-caliber look for the starters?

The Navy Classic, a small, but dynamic tournament in Annapolis is on the schedule during the Thanksgiving holiday. About a five-hour drive up 81 and over to the D.C. metro area. This is the first time I can recall the Navy Classic being on the schedule. What do you like about the tournament and what about it from a scheduling standpoint is beneficial?

Closing out the calendar year with a home dual before Christmas with Chattanooga. Last year, it was the dual with West Virginia around this time on the calendar. This time it's the Mocs.

The new year will open with a trip to Mount Pleasant and a dual with Central Michigan on January 3 before a home dual on January 11 with West Virginia. The Virginia Duals has been working on trying to bring itself back and right now, the tournament doesn't seem like a good fit competitively for Virginia Tech despite the large group of Hokie fans who live in Hampton Roads.

On January 18-19, it's a trip to the Empire State and a pair of EIWA teams. On Saturday, it's a dual with Binghamton, your former coaching place of residence, and on Sunday, it's a dual with Cornell, who seems to be looking ahead as several of the Big Red's best wrestlers will be opting to take the year off in preparation to train to make the 2020 Olympic Team.

Five of the next six duals are with conference opponents as you close out the season with six straight single dual weekends. From January 25-February 22, you go home against North Carolina, on the road at Virginia, on the road in a non-conference dual at Old Dominion, the Moss Arts Dual is February 8 against Duke, you go to Raleigh on February 15 to take on NC State before closing out the season on the road at Pitt before turning around two weeks later and competing at the ACC Championships at Pittsburgh.

The ACC sets the conference schedule for the most part, so thoughts on how you guys close out the season with single weigh-in events.

Now, thoughts on the NCAA Championships in a giant football stadium. U.S. Bank Stadium, home of the Minnesota Vikings. We're looking at the potential of nearly 45,000 wrestling fans in there. How's the ask been for tickets this year after the pandemonium that was 2019 in Pittsburgh?