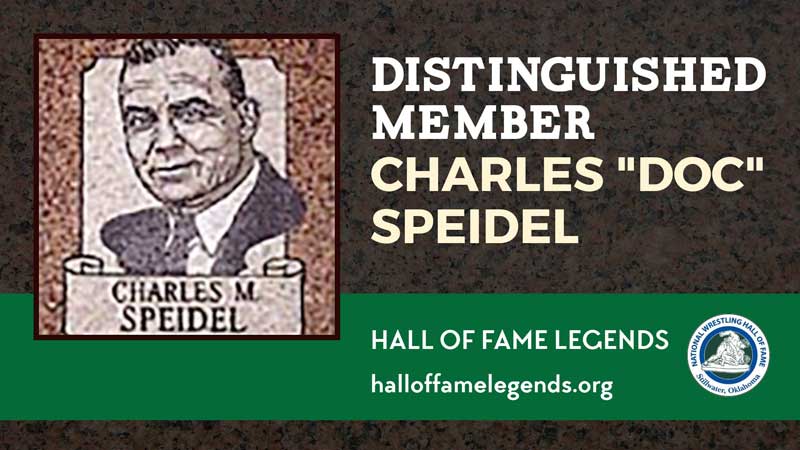 He devoted a lifetime to the sport of wrestling. But in more than 60 years as an athlete, coach and teacher, Charlie Speidel contributed far more to the lives of others than ever can be recorded in the statistics of achievement.

He was a pioneer for wrestling and helped it gain stature as a major sport in the high schools and colleges of Pennsylvania and across the eastern states. He traveled extensively, often with arch rival Billy Sheridan, to present clinics and introduce the sport.

The record shows that “Doc” Speidel coached 38 years at Penn State University. His teams won 191 dual meets and lost only 53. Seven of them were undefeated. They won eight Eastern Intercollegiate team championships and 56 individual titles. Six of his wrestlers were National Collegiate champions. And in 1953, his Nittany Lions became the only eastern squad ever to win the NCAA team championship.

He was an author of wrestling books and articles for such publications as the Encyclopedia Brittanica. During World War II he served four years as fleet recreation officer in the South Pacific.

In 1930, he brought the nation's wrestling coaches together and founded the National Wrestling Coaches Association, later serving two terms as its president. All this is a matter of record.

But Charlie Speidel's contributions cannot be measured by victories and defeats. First of all, he was a teacher who gave of himself to enrich the lives of young men.

He taught “total wrestling” -not only the mechanics, but enthusiasm, self-reliance and the importance of deep dedication, hard work and the strength of the will to win. He stressed the importance of education and insisted that his athletes complete their degrees.