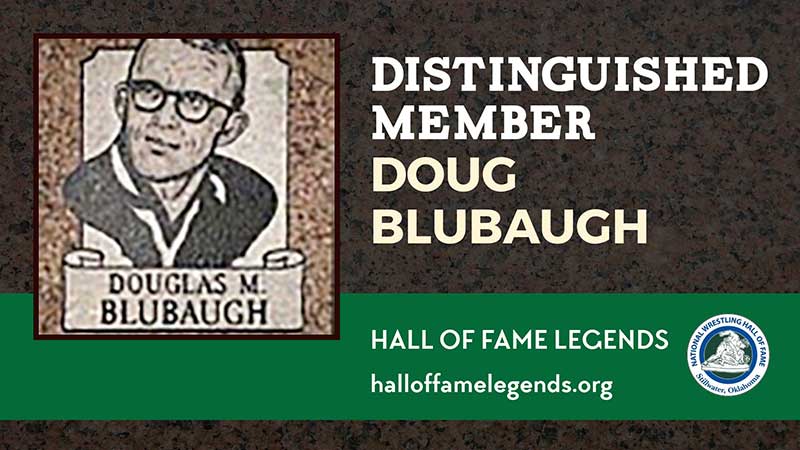 Three times the Persian attacked, each time throwing the young American into danger. Then a swift counterattack from Blubaugh hurled his opponent to his back … suddenly the struggle was ended.

Thus did an Oklahoma farm boy reach the apex of a brilliant athletic career, earning the 1960 Olympic gold medal at 160.5 pounds, and with it recognition as the outstanding wrestler in the world.

Doug Blubaugh was no stranger to the role of champion. He won NCAA honors for Oklahoma State in 1957 and National AAU Freestyle titles in 1957, when he was named outstanding wrestler, and 1959.

A year before his Olympic conquest, he won a gold medal in the 1959 Pan American Games at Chicago, matching the 1955 achievement of his brother, Jack. They were the first brothers to capture Pan Am titles.

Blubaugh is remembered, too, for his epic struggles with a former college teammate, Phil Kinyon. Over four years of Freestyle competition, they met 13 times. The first 12 bouts ended in draws, 11 scoreless. Five of these were in the 1960 Olympic trials, before Blubaugh crashed through for the takedown and victory that sent him on to Olympic glory.

From a competitive career totaling more than 400 victories against just 17 defeats, Blubaugh turned to coaching and won added respect for his teaching skills and his honesty and dedication. After seven years as an assistant at Michigan State, during which he was Freestyle coach of U. S. teams in the 1971 Pan American Games and World Championships, he spent a decade as head coach at Indiana University.

As a champion athlete of awesome achievement, and as a living example to young men of the highest standards of character and integrity, Douglas Morlan Blubaugh is honored as a Distinguished Member of the National Wrestling Hall of Fame.