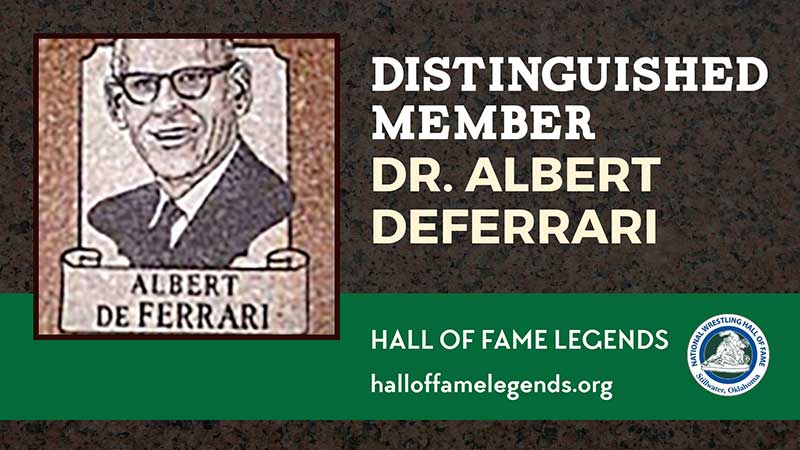 His interest in wrestling surfaced in 1922 from deep in the waters of San Francisco Bay. After more than half a century of service to the sport, Dr. Albert deFerrari's impact on wrestling had spanned the globe.

His first exposure to the sport followed a shipwreck near the Golden Gate. The ship's cargo of cotton was declared free to any takers. Already a champion swimmer and diver, deFerrari retrieved a truckload. The mothers of his neighborhood then remade the wrestling mats of the area, stuffing in the free cotton and sewing the canvas covers with heavy thread.

Such interest attracted the attention of the young San Francisco dentist. Soon he would become involved in promoting wrestling in the storied Olympic Club, and would nurture the sport until the club became of national renown on the mats.

Dr. Al never lost his innovative approach. While serving more than two decades on the U. S. Olympic Committee and the International Wrestling Federation, he brought about this country's first exchange series with Japan and the Soviet Union and inaugurated the Junior World Championships.

When USA Wrestling was founded in 1968, he was an inspirational leader and a close liaison with the international leaders of the sport until his death in 1976.

His greatest contribution came during the late 1950s when he rescued the vague and indecisive international rules from their pointless pattern. Because of his efforts, the international federation accepted the scoring of points for takedowns, stopping of the clock for out-of-bounds, and requirements that even the touch-fall must be controlled by the offensive wrestler. Even a shipload of waterlogged cotton had been easier to salvage from the depths.

For a lifetime of leadership in the development of wrestling, and for his impact on modernization of the sport, Dr. Albert deFerrari is honored as a Distinguished Member of the National Wrestling Hall of Fame.

SUPPORT THE SHOW
And if you're a fan of the extensive and broad-based reach of the shows on the Mat Talk Podcast Network, become a contributor today.. There are various levels of perks for the different levels of patronage. If you like wrestling content — scratch that — if you LOVE great wrestling content, consider becoming a supporter. How much you give is solely up to how much you believe it's worth to you.