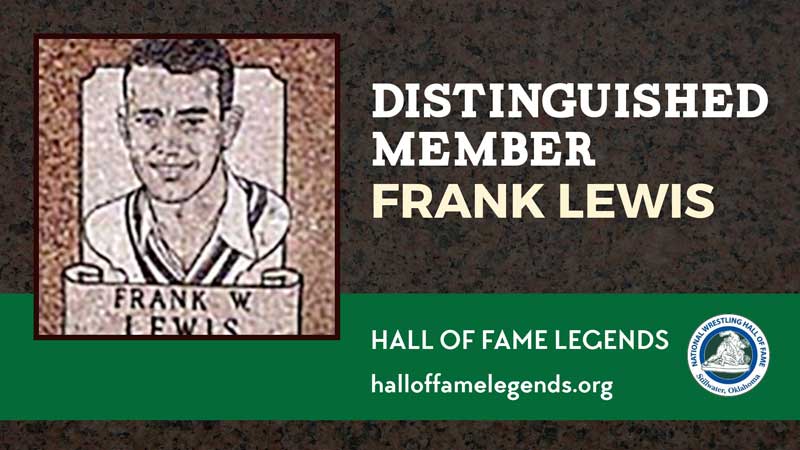 As a tall, skinny college freshman, Frank Lewis was “a little tired” after six years of wrestling and planned to give full attention to his studies at Oklahoma State University.

But he needed a physical education credit and a wrestling class would provide an easy grade. Members of the class were required to compete in the all-college intramurals and when he failed to win the championship his pride was stung. He decided to concentrate on wrestling again.

Frank Lewis concentrated so well that he became a national champion and the gold medalist in the 1936 Olympic Games at Berlin.

A state high school champ and four-time medalist from 100 to 155 pounds, he possessed the raw talent from which coach Edward C. Gallagher could mold a winner. But because of his rapid growth, the youngster didn't have the stamina to wrestle the longer college matches. And because of a minor heart condition, his coach had to devise a special training routine to build stamina without putting a strain on his health.

Despite these difficulties, he established a collegiate record of 45-5, winning the NCAA title in 1935 after placing second the year before. Both years he contributed vital points to the Cowboys' team trophies.

In 1935, he won the National AAU crown and became the first contestant to be officially recognized as outstanding wrestler of a National AAU tournament, receiving a gold watch for this honor. A year later, he swept undefeated through the series of Olympic trials, then defended his position against his alternate on the boat to Europe.

In the Games, he scored a fall the first day, another the second day. He wrestled three times the third day, but stamina no longer was a problem and two more falls offset a narrow loss to Tur Andersson of Sweden as Frank Lewis became the only American to win a championship.

As a wrestler of ultimate achievement and a lifelong example of perseverance and dedication to goals, Frank Wiatt Lewis is honored as a Distinguished Member of the National Wrestling Hall of Fame.

SUPPORT THE SHOW
And if you're a fan of the extensive and broad-based reach of the shows on the Mat Talk Podcast Network, become a contributor today.. There are various levels of perks for the different levels of patronage. If you like wrestling content — scratch that — if you LOVE great wrestling content, consider becoming a contributor. How much you give is solely up to how much you believe it's worth to you.