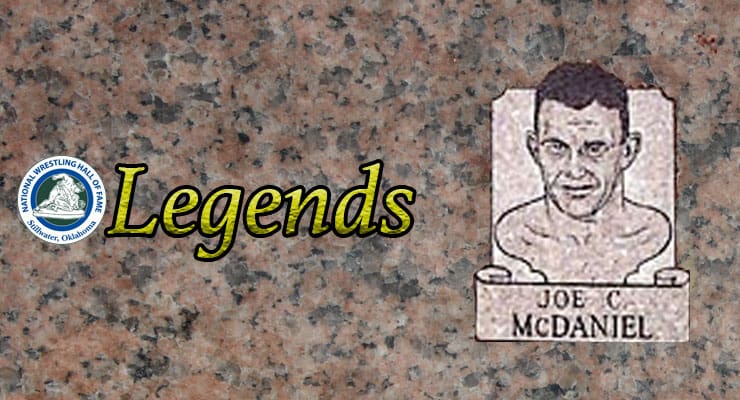 McDaniel passed away in 2011, but archives unearthed at the National Wrestling Hall of Fame have given us his voice from that Honors Weekend.

He was destined to be an Olympic champion, but the Games of the XII Olympiad were engulfed in the holocaust of World War II. So Joe McDaniel had to settle merely for recognition as the outstanding wrestler of the world.

Three times he was a National Collegiate winner for Oklahoma State University, each year leading the Cowboys of coach Edward C. Gallagher to the team trophy. As a 118-pound junior, he was voted outstanding wrestler of the 1938 tournament, an honor won a year earlier by his roommate, Stanley Henson. Three times he reigned as National AAU champion, twice as a collegian when the Cowboys also won team honors, and again in 1941, two years after graduation.

McDaniel's only serious exposure to international competition came at the close of his junior year, in a 1938 European tour climaxed by a tournament at Stockholm, Sweden, among the leading wrestling nations of the world. He was undefeated in 12 bouts and scored an overwhelming victory over Odon Zombori of Hungary, winner of the Olympic gold two years earlier.

Despite a three-year hitch in the Air Corps and seven years as field representative for a major steel firm, McDaniel never has been far from the sport of wrestling.

After a year of high school coaching and another at Maryland, he returned from the war to coach 11 years at Syracuse University, leading the Orange to a fourth place national finish. In 1963, he moved to Wyoming, coaching two years in high school and eight at the University.

His career turned full circle in 1973, when he returned to his home town of Sulphur, Oklahoma, to serve as high school coach. In 30 years of coaching at all levels, his record was 257 victories against 105 defeats.

In recognition of his great achievements as a wrestler and his long years of service to the sport, Joe Clark McDaniel is honored as a Distinguished Member of the National Wrestling Hall of Fame.