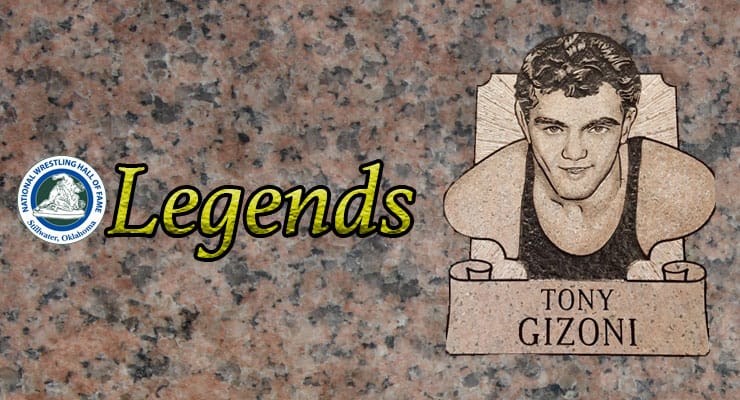 Episode 9 of the National Wrestling Hall of Fame's LEGENDS podcast features 2017 Distinguished Member Tony Gizoni. Gizoni passed away just over a month after his 2017 induction.

One of the greatest wrestlers ever to grace the collegiate mat, Tony “Babe” Gizoni was undefeated for seven years in high school and college, winning 108 straight matches. He became the fourth wrestler in Pennsylvania prep history to win three state championships, claiming titles at 101, 103 and 112 pounds from 1946 to 1948 at Washington High School.

Gizoni won back-to-back NCAA Division I championships for Waynesburg College. He was also voted Outstanding Wrestler after winning at 121 pounds in 1950 when, as an unseeded wrestler, he defeated the tournament's top seed ? a two-time defending national champion ? in the finals. In 1951, wrestling at 123 pounds, he won the title as the No. 1 seed. Trailing in the finals, Gizoni used hand control, back pressure and a hip heist to get a reversal and gain the upper hand in a tight match. That patented move is forever known as the “Gizoni Special.” As a senior in 1952, he was ruled ineligible for the postseason after competing in dual meets and tournaments that were not approved by the NCAA Rules Committee.

While at Waynesburg, Gizoni's 28 dual wins helped the Yellow Jackets to 34 consecutive dual meet wins from 1949 to 1952. Finishing his collegiate career with a 52-0 record, Gizoni's overall record for high school and college was 120-3-1. The three losses and the tie occurred in his freshman year of high school.

As a true legend in the wrestling history of Pennsylvania and the NCAA, Tony Gizoni is honored as a Distinguished Member of the National Wrestling Hall of Fame.