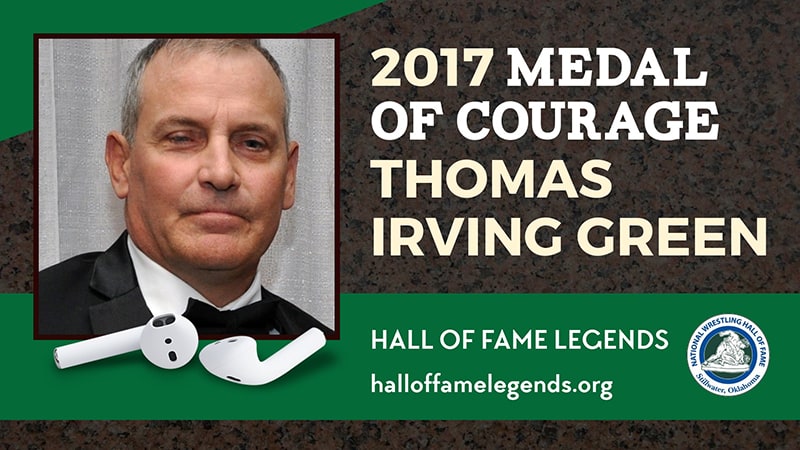 As the all-time wins leader at Weedsport High School in New York, Green wrestled collegiately at Cayuga Community College in Auburn, New York, and at SUNY Cortland. After college, he turned his attention to officiating and was moving up the ranks, including serving as an assistant mat official at the Division III NCAA Championships in 1996. Just a few weeks after the end of the 1997 wrestling season, his life changed forever.

On May 15, 1997, a container filled with a caustic chemical burst and sprayed Green's face. Blinded and his face badly burned, Green underwent a series of long surgeries. He needed a procedure to increase the size of his mouth, which had healed so small that even his thumb wouldn't fit inside.

He underwent a cornea transplant, as well as another surgery that used tissue donated from his brother, which helped him regain some of his sight. He has had stem cells put in his eyes, reconstructive retinal surgery and a synthetic cornea implant. In all, Green has endured more than 40 surgeries.

One year after the accident, Green returned to wrestling as a volunteer assistant coach at New York's Port Byron Central School District, helped restart the Port Byron Pee Wee youth program and eventually became head wrestling coach for PBHS. Taking over a team with just five wrestlers, Green built Port Byron into a powerhouse, winning league championships in 2011, 2013 to 2016, and the team tied for the title in 2017. He has been named Patriot League Coach of the Year seven times and registered his 100th career dual win in 2015.

For overcoming seemingly insurmountable obstacles to become an exceptional coach and mentor, Thomas Irving Green is awarded the Medal of Courage by the National Wrestling Hall of Fame.