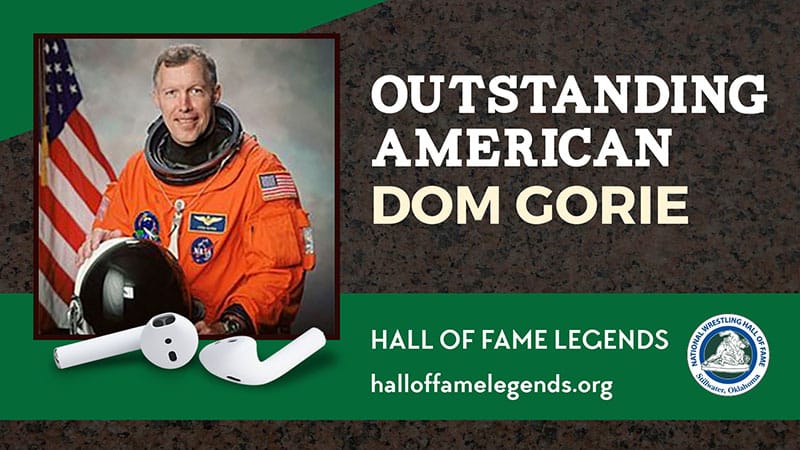 The latest episode of the National Wrestling Hall of Fame Legends Podcast is with 2017 Outstanding American Dom Gorie.

Beginning his wrestling career in junior high school, Dominic (Pudwill) Gorie always set his sights high. As a wrestler at Palmetto High School in Miami, he forged a standout career record of 41-9-1. He received an appointment to the United States Naval Academy in 1975 and wrestled four years for legendary coach Ed Peery, who was inducted as Distinguished Member of the National Wrestling Hall of Fame in 1980.

Gorie received a Bachelor of Science degree in ocean engineering from the Naval Academy in 1979 and his master's in aviation systems from the University of Tennessee in 1990. He was designated as a naval aviator and piloted fighter jets aboard the USS America, the USS Coral Sea and USS Roosevelt from 1981 to 1992, where he accumulated more than 600 carrier landings. Gorie also flew 38 combat missions in Operation Desert Storm.

Gorie was ordered to United States Space Command in 1992 and was selected as an Astronaut Candidate in 1994. He reported to Johnson Space Center in 1995. Following a year of training and evaluation, Gorie was assigned to work safety issues for the Astronaut Office. He served as a spacecraft communicator in Mission Control for numerous space shuttle flights and was chief of the Astronaut Shuttle Branch.

In June of 1998, his most lofty goal was achieved with the first of two shuttle missions as a pilot, followed by two more as Mission Commander. Gorie, who retired from NASA in 2010, has logged a total of 49 days in space. He has received five Medal of Citation honors, including the Distinguished Flying Cross in both 1992 and 2010, the Defense Superior Service Medal, the Defense Meritorious Service Medal and the Legion of Merit from 1995 to 2002.

Gorie is an active volunteer and board member with Combat Wounded Veterans Challenge, a national organization that provides a spectrum of adventures to wounded veterans while focusing on rehabilitation research.

For his achievements as an astronaut and his military service to his country, Dominic Gorie is honored as an Outstanding American by the National Wrestling Hall of Fame.