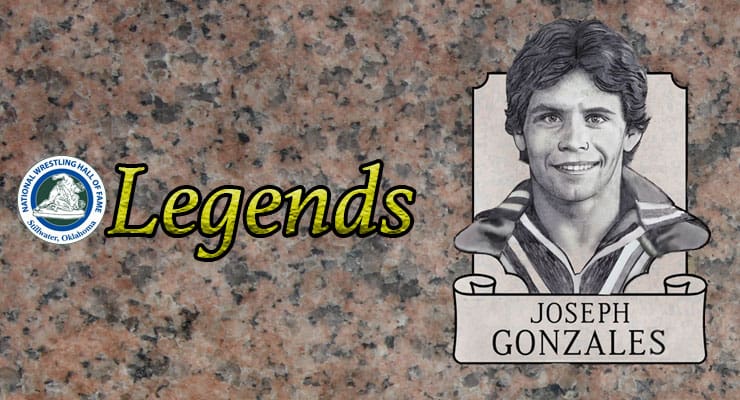 The goal of wrestling is to take an opponent off his feet and place him on the mat. Perhaps no wrestler in collegiate wrestling has done it better?or more often?than Joe Gonzales.

Gonzales perfected the takedown during his time as a 118-pound wrestler at California State-Bakersfield. His 1980 wrestling season ranks among the finest in collegiate wrestling history. Gonzales' 55-0 record is the national record for the most wins in a single season with no defeats and no ties. He notched 448 takedowns that year too, also a national record.

His junior season was almost as successful. Gonzales went 44-1 during the 1979 season, winning a Division II championship with a 22-14 win in the finals. He entered the Division I NCAA tournament as the top seed, but dropped a thrilling 16-13 decision to Gene Mills of Syracuse in the finals. Many consider their exhilarating showdown as the most entertaining collegiate match ever. Gonzales also earned a California Junior College state title for East Los Angeles College.

Gonzales carried his collegiate success into international competition. He was a five-time National Open freestyle wrestling champion at 114.5 pounds, winning titles in 1980, 1982, 1983, 1985, and 1988. “Gonzo” was also a five-time U.S. World Team member, a three-time World Cup champion, a bronze medalist at the 1982 World Championships, and champion at the 1982 Tbilisi tournament?considered by many as the toughest tournament in the world. He was a member of the 1984 Olympic freestyle team as well.

After college, Gonzales served as an assistant wrestling coach at Arizona State from 1986-1989. The Sun Devils won the Pac-10 tournament all four seasons he was with the program, and they were crowned NCAA tournament champions in 1988.

In recognition of a record-setting wrestling career, Joe Gonzales is recognized as a Distinguished Member of the National Wrestling Hall of Fame.