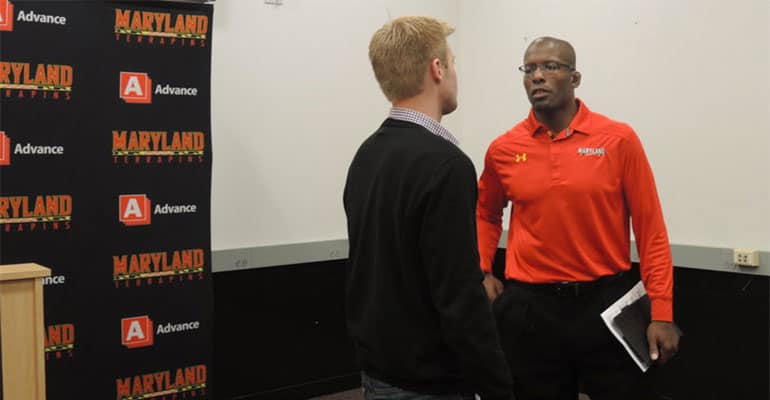 On Episode 8 of the Maryland Mat Chat, head wrestling coach Kerry McCoy talks about the regular-season finale of the program's first season in the Big Ten.

The Terps had notable home duals against Penn State, Iowa and Minnesota, but with the regular season now over, the focus shifts to the Big Ten Conference tournament in Columbus, Ohio on March 7-8.

Coach McCoy talks about a big win registered by Rob Fitzgerald in the Terps' final dual of the season at Northwestern and the improvement of 157-pounder Lou Mascola since the Midlands. He'll also point out the training schedule for the next three weeks as the team has no more competition, other than an open tournament in Virginia, until the Big Ten Championships.

Coach McCoy will also point out where this year's improvement has been and who the surprises have been.

Keep an eye on www.marylandmatchat.com for updates and various formats of how you can listen to the show and subscribe via iTunes, Stitcher, Spreaker and SoundCloud. Android and iOS apps also available for FREE. Go to www.marylandmatchat.com and check the HOW TO LISTEN menu and you'll see links right to the specific apps. It's also available on the sidebar of the homepage.

Follow @mattalkonline on Twitter for updates and nuggets of information about the Maryland Mat Chat and all the other shows that are part of the Mat Talk Podcast Network. You can also check out our network home page at www.mattalkonline.com.