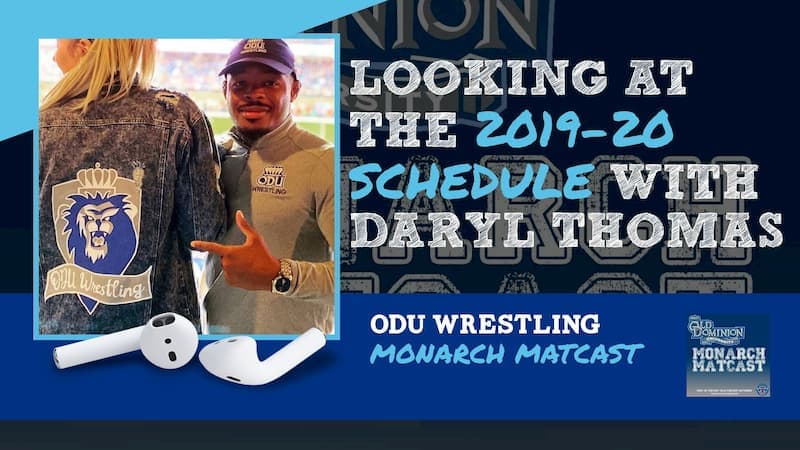 Episode 66 of the ODU Wrestling Monarch Matcast, today, we visit with associate head coach Daryl Thomas. Practice has started and a new season of Monarch wrestling is here. On today's show, we'll break down the opening week of practice and talk about this year's schedule and the opponents we'll see coming to The Ted this year and what road trips Monarch Nation can be prepared to see around the country.

Before we start, thanks to all the feedback received from #MonarchNation about the previous episode, the tribute to the late Jamie Kelly.

Giving Day: Monarchs calling previous donors and contributors. I got a call from Larry Early. We'll put the link to continue to give in the show notes for this episode. Like right here.

Coach Thomas recently spoke at the Chesapeake Sports Club. What's an event like this mean for a coach?

Every starter who wrestled at the conference tournament is back. Coach Martin says there's a belief on this year's team that he hasn't often seen. What do you see?

Monarchs are ranked preseason No. 19 by W.I.N. Magazine, No. 20 by Trackwrestling and No. 21 by Flowrestling. Rankings from Amateur Wrestling News, InterMat and the NWCA have not yet been released.

Schedule for 2019-20
Blue-Silver Intrasquad, first chance to see most, if not all of the Monarchs wrestle at home at the Jim Jarrett Athletic Administration Building on Thursday, October 24 at 7 p.m.

November, the season kicks off with a new event hosted by The Citadel on November 3, the Battle at The Citadel. This includes ODU, American, Duke, NC State, Presbyterian, Stanford and the host school, The Citadel. It's multiple entries and designed for mat time. On the same day, some Monarchs will also head up to the Princeton Open in New Jersey. Who is going where?

November 10, the Monarchs will head to the Journeymen Classic, another modified individual tournament where pools of athletes will compete against one another. Follows the Northeast Duals.

First dual of the year comes against No. 13 NC State on November 15 in Raleigh. The team will stick around for the Wolfpack Open that following Sunday. November will close out with the Navy Classic in Annapolis on November 23 just after Thanksgiving.

December opens with a drive up to Fairfax for the Patriot Open on December 7 before the heading to your old neck of the woods, Edwardsville for a dual with SIUE.

The calendar year closes out as the Monarchs will head to Fort Lauderdale to compete at the South Beach Duals for the first time. MAC foe Missouri is on the schedule. Who else will the Monarchs face as the format is two duals each day, then some time on the beach.

2020 Opens with a trip to Amish country as a number of Monarchs will compete at the Franklin & Marshall David Lehman Open in Lancaster.

While not officially a home date, the Monarchs first competition locally will be at the 40th annual Virginia Duals in the Hampton Coliseum. The field this year includes ODU, Duke, Fresno State, Kent State, Maryland, Penn, Rider and Virginia.

Now the conference slate in the MAC has changed significantly with the absorption of the old Eastern Wrestling League. January 17 sees the Monarchs home opener against No. 26 Lock Haven, a well-coached gritty team from central Pennsylvania. Old CAA rival Rider will get reacquainted with the Monarchs on January 19 at The Ted.

The following week, it's a road trip through the Keystone State and a date with Edinboro on January 24 and a dual with Clarion two days later on the 26th.

Virginia Tech will come to town on Sunday for the annual alumni dual on Sunday, February 2. Tech always brings a big crowd.

Another former CAA opponent, Drexel, which competes in the EIWA, will come to town on Monday, February 10. A non-conference dual with Navy takes place on Valentine's day up in Annapolis, before the Monarchs wind through Fairfax on the way home to take on the Patriots of George Mason two days later. So with Rider, Drexel and George Mason on the schedule, that's three former conference foes set to tangle.

The Monarchs close out the home schedule with Bloomsburg on February 23 before heading to Northern Illinois University on March 7-8 for the Mid-American Conference Championships.

So no Central Michigan or Ohio, possibility of seeing Kent State, but this is a drastically different conference schedule than previous years.

And remember Monarch Fans, like Jamie Kelly said, be your best.