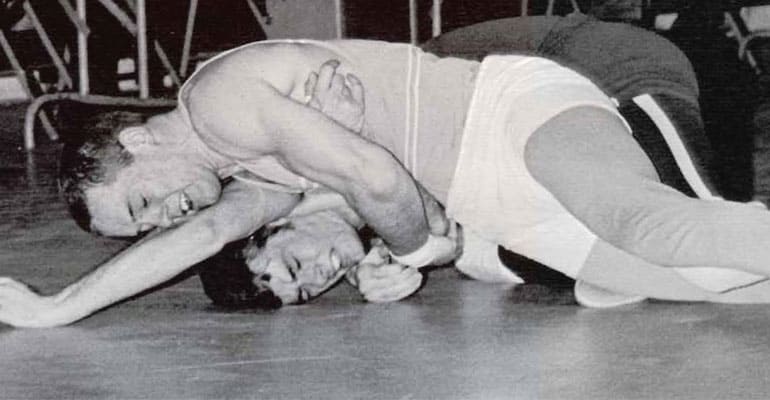 Hey there Monarch Wrestling fans, Jason Bryant here with another episode of the ODU Wrestling Monarch Matcast. Today we’ll talk with 1967 All-American David Lindhjem, who will be inducted into the ODU Sports Hall of Fame on November 8.

Lindhjem wrestled for coach Pete Robinson during the early years of the program and placed fourth at the 1967 NCAA College Division championships. A longtime teacher and educator at nearby Norfolk Academy, Lindhjem will join Wendy Larry, Beth Anders, Alex Loughton and Izak van der Merwe as part of the Class of 2014.

Before we get to our engaging discussion with Lindhjem, we’ll give you a rundown of action from the first week of college wrestling season and previewing what’s next for your Monarch wrestling program.

Second-ranked Jack Dechow competed at the NWCA All-Star Classic at 184 pounds. He fell to Cornell’s top-ranked Gabe Dean 5-2. Dechow made ODU’s fourth-ever appearance, following Wayne Bright in 1970, and James Nicholson, who appeared in 2008 and 2009.

The freshmen got to work down at The Citadel Open in Charleston, South Carolina over the weekend.

125-pounder Josh Markham finished second, falling to Coker’s Travis Laxton 6-5 in the finals. Markham had two decisions and two technical falls on the way to the finals.

At 157 pounds, T.C. Warner reached the finals picking up a fall, a major decision and a technical fall. In the finals, he was pinned by NAIA All-American Shawn McGhee of Campbellsville.

The next two weeks will only be open competition for the Monarch wrestling program as they head up to Binghamton for the Binghamton Open, then head down to Raleigh on November 16 for the N.C. State Wolfpack Open.

A reminder the first home dual is on Sunday, November 23 at 1 p.m. against sixth-ranked Missouri. ODU enters the season ranked No. 22 in the first USA Today/NWCA Division I Coaches Poll that was released on November 1. That weekend is also alumni weekend for Monarch wrestling alumni. Join us for a weekend of ODU sports action with wrestling and of course, the football game on Saturday, November 22.

Lindhjem’s got some great stories about Pete Robinson, Carl Ragland, Lou Curra and some of the other personalities during his time in Norfolk.

Be sure to check out the Monarch Matcast apps available for Android and iOS by going to www.monarchmatcast.com/apps.
The Monarch Matcast is a presentation of the Mat Talk Podcast Network. Find the entire network of shows at www.mattalkonline.com