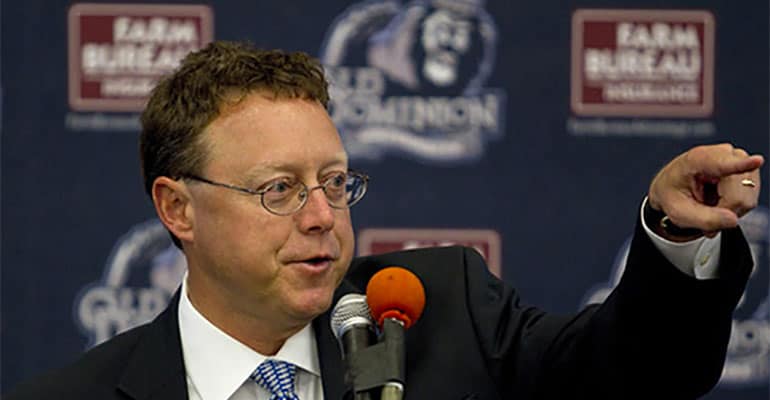 Today on Episode 8 of the ODU Wrestling Monarch Matcast, we'll recap the Monarchs win over Chattanooga and talk with Old Dominion University Director of Athletics Wood Selig about his thoughts regarding the wrestling program and how it fits within the infrastructure of ODU sports.

The Old Dominion University wrestling program picked up a quality 25-12 win over Chattanooga on December 20 at the Ted Constant Convocation Center.

Chattanooga, a longtime power in the Southern Conference, was ranked nationally by the USA Today/NWCA Division I Coaches Poll all season until they dropped matches to Purdue and North Carolina a week prior. Regardless of the ranking, the Mocs have been a traditionally strong program.

With the bout starting at 165 pounds, it meant we'd have the Warner brothers — no, not those Warner Brothers — but Tristan and T.C. Warner bookending the dual. Tristan Warner started off strong and remained unbeaten on the year with a quick fall over Garrett Alexander just 90 seconds into the match.

Austin Coburn fell at 174 pounds to Levi Clemons, a wrestler with NCAA championship experience. Coburn was deep in on several shots, but couldn't finish. If Coburn finishes those attempts down the stretch, he could be in a position to win more matches and reach the NCAA championships.

All-American Jack Dechow was a bit sluggish, but came away with a 6-4 victory in overtime against John Lampe. It's the second time this year Dechow's been pushed into overtime by a visiting opponent.

Kevin Beazley took an early lead against red-hot Scottie Boykin, but late takedowns in the third were the difference maker at 197 pounds. Boykin's coming off a solid win over nationally-ranked Braden Atwood of Purdue.

At heavyweight, Jake Henderson struggled to get out from underneath the lanky Jared Johnson and gave up an escape and a riding time point for a 2-0 loss.

The Mocs won three of the first five matches to tie the Monarchs 9-9 going into the break. Coming back around to 125, Brandon Jeske showed that hey, that Granby Roll can work in college. With the score knotted at two apiece against nationally-ranked Sean Boyle, Jeske rolled Boyle from bottom and got two for the reversal and was getting a nearfall count when he kept Boyle's shoulder to the mat for the fall.

Mikey Hayes came after Nick Soto at 133 pounds, scoring a takedown out of a scramble. Hayes nearly scored nearfall points on the exchange, but Soto would pull away with an 8-3 decision.

With three matches left, Chris Mecate cradled up Mike Pongratz and nearly pinned him in the first period, but that's all Mecate would need to secure a 4-0 win.

Alexander “Lenny” Richardson secured the team victory, putting on a clinic against Shawn Greevy at 149 pounds. Interestingly enough, Greevy was one of three wrestlers in the dual who went to Cumberland Valley High School in Mechanicsburg, Pennsylvania. The other two — Tristan and T.C. Warner. Richardson would pick up a dominant 14-1 major decision.

T.C. Warner closed out the win for the Monarchs with a 2-1 win, using a riding time point and an escape to take the victory over Austin Sams.

The Monarchs will next be in action at the 52nd annual Ken Kraft Midlands Championships in Evanston, Illinois. The Midlands is one of the premier college wrestling events in the nation. Wrestling begins on December 29 with the placement matches and finals set for December 30. Fans can keep up with ODU updates from the Midlands by following @ODUwrestling on Twitter.

Some of the topics we discuss with Selig include where he wants to see the wrestling program head in terms of national competitiveness, his history with the sport and we also talk about the finances of college athletics as it relates to Olympic sports offerings around the country.