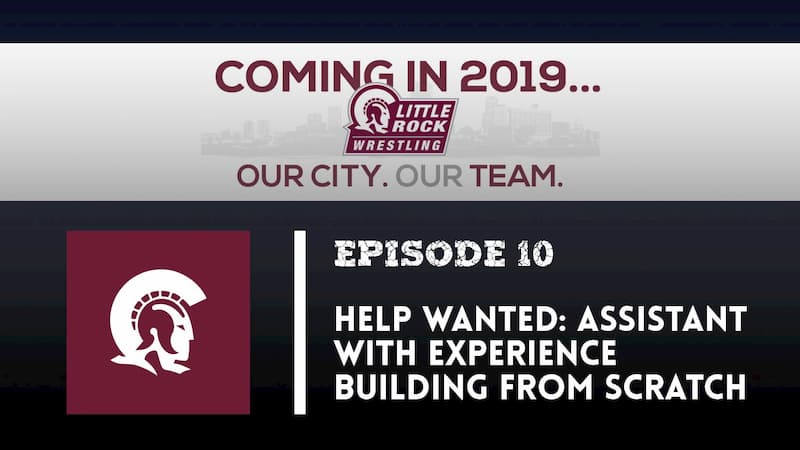 For a solid year, Neil Erisman was it when it came to the new wrestling program at Little Rock. He was every coach, every recruiting coordinator, he ran every errand that needed to be run. He did all this while awaiting the completion of his offices and wrestling facility and with a wife and three – soon to be four – kids at home.

It might have been the busiest year of the young coach's life. But when it came time to hire an assistant coach, there were over four dozen candidates interviewed. Some were close friends from his time at Oklahoma State, others were coaches who were looking for upward mobility and a good paycheck. Then there were the ones who were true coaches, but ultimately one candidate stood out above the rest.

Coach Erisman wasn't just hiring an assistant coach, he was hiring the other part of his staff that would create the coaching unit to pilot Little Rock wrestling into its maiden wrestling season.

Remember the situation when Little Rock hired Erisman to be their head coach? Did they go for the high profile national champion? The seasoned Division I assistant or the sexy name hire? They went with a guy who had a passion to build and a passion to teach.

Erisman did the same when he selected Javier Maldonado as Little Rock's first assistant wrestling coach.

Welcome to Rocked Up, the story of the foundation and formation of the first Division I college wrestling program in Arkansas, starting in November of 2019 at the University of Arkansas at Little Rock. This is the 10th edition of this story. We started the journey developing the foundation of wrestling in the state of Arkansas and now we've moved on to the formation of the team, because to tell the full story of this program, you have to start at the very beginning.

In 2018-19, Javier Maldonado was leading Southeastern University in Lakeland, Florida to its second straight Top 20 finish at the NAIA National Championships. Southeastern was the first varsity college wrestling program in the state of Florida in nearly three decades. The school put an emphasis on wrestling and building the profile of the sport and the school, doing it with one of their native sons. Maldonado is a Florida native.