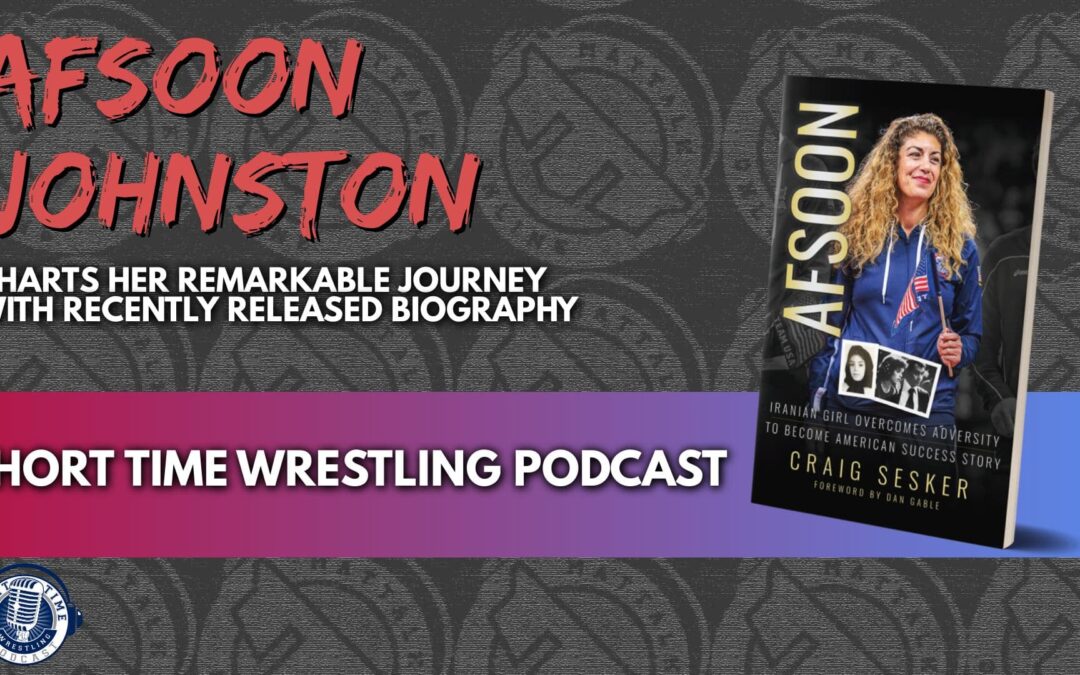 Afsoon Johnston, then known as Afsoon “Sue” Roshanzamir, was the first world medalist in women's wrestling back in 1989. Afsoon will talk about the book, Afsoon, written by Craig Sesker, that tells the story of how she and her family fled Iran in the early 1980s and landed in California. Her journey made her somewhat of an outcast in an era where tensions between the U.S. and Iran were high. She gravitated towards wrestling, a sport where girls were rare. Afsoon's breaks down the story of how the book came to be and discusses some of the turmoil she experienced growing up as a teen and as a wrestler.

You can get the book at AfsoonWrestling.com

SHORT TIME SHOTS
Well, we’ve got Division I teams taking the mats all over the place and before I get corrected by my own correction, college wrestling has been ongoing since early November and that does include Division I. On November 14, The Citadel wrestled a home dual. The NAIA has been less prolific than normal, but they’ve had dual meets consistently. Now we have schedules for most of the 71 teams competing this year on the Division I mats. There’s a handful of Division II schools that aren’t competing – the schools in the PSAC, most notably. Division III has seen a number of conferences opt out, but the only all-sports conference where every school sponsors wrestling in Division III is the American Rivers Conference, formerly known as the Iowa Conference. We’ll see some Division III fire up this weekend. Speaking of Division III, Case Western Reserve head coach Danny Song stepped down from his post yesterday. Case is one of those schools that opted out of sports this winter.

Before we get to the weekend’s action, we had a couple of matches in Division II on Tuesday. Coker topped Emmanuel 31-18 down in Franklin Springs, Georgia, while fifth-ranked McKendree shut out Kentucky Wesleyan 51-0 on the strength of five falls. Tyler Delaware picked up a 9-5 win at 133, he’s a transfer from some poorly ran Division I school in Norfolk, Virginia.

The NWCA Division I Coaches Poll was released on Tuesday and for the first time since the Nixon administration, Northern Colorado is nationally ranked. The last time the Bears were ranked by the NWCA was when they were sixth heading into the postseason on March 5, 1969. The school wasn’t even known as Northern Colorado yet, it was still Colorado State College. The University of Northern Colorado’s name came to be in 1970. With five returning NCAA qualifiers the Bears topped Wyoming 24-19 over the weekend and with both teams receiving votes last week, that was all Troy Nickerson’s squad needed to jump in at No. 25. But wait, Northern Colorado wasn’t Division I until like 2008 or something right? True, but prior to the three divisional format, the NCAA championship was open and there were college and university divisions. Prior to 1963, there was only one NCAA championship. Schools like Northwestern would routinely dual teams like Wheaton and Elmhurst. The artist formerly known as Colorado State College lived atop the Rocky Mountain Athletic Conference. There’s a lot of history and wrestling tradition in Greeley and its nice to see what coach Nickerson has done to keep the kids home and put a ranked team on the mat for the first time in nearly 19,000 days.

On the Network, new show releases from On the Mat with Austin Gomez and the #PackMentality Pop-Ins Podcast with Pat Popolizio.

The latest shout out goes to new team member Brenner Flaten. He was looking for access to the stats behind the curtain at almanac.mattalkonline.com and he became a team member to get access to it. So here’s his obligatory shoutout and he’ll have some gear coming his way!

Support the Show and the Mat Talk Podcast Network
Patreon | Rokfin
The Short Time Time Wrestling Podcast is proudly supported by Compound Sportswear.
And if you haven't already, leave a rating and a review on Apple Podcasts.