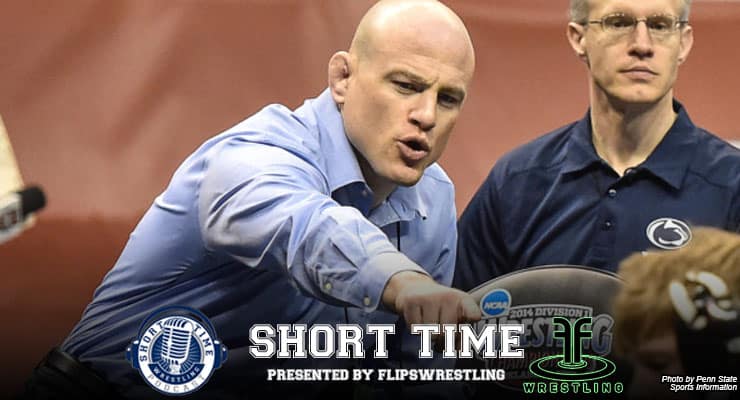 Episode 246 of the Short Time Wrestling Podcast visits with Penn State head wrestling coach Cael Sanderson. With Penn State heading into this weekend's Big Ten Championships in Iowa City, the focus is on getting the work done at Carver-Hawkeye, but Sanderson also spends time revisiting his take on duals versus tournaments and his take on this year's National Duals format.

Along with assistant coach and brother Cody Sanderson, the format for this year's National Duals was similar to their design. Penn State participated for the first time in a number of years and Cael answers questions about the participation of his team and his general feeling about the format.

He'll also address some concerns brought up in the media within the past week as well as a potential Big Ten Championship dual and this year's lack of a date with Iowa.

Sanderson will then go weight-by-weight and analyze the team's potential performance at the Big Ten Championships.

THE BIGGEST, BADDEST PREVIEW GUIDE EVER, PRE-ORDER NOW!
The Mat Talk Online NCAA Division I Championship Preview Guide is now available for pre-order. With over 200 pages of facts, stats, records and information, there isn't any other place you can find all of this stuff. Pre-order now by going to mattalkonline.com/fanguide16 and get it as soon as it's released on March 15. Your fantasy team depends on it.