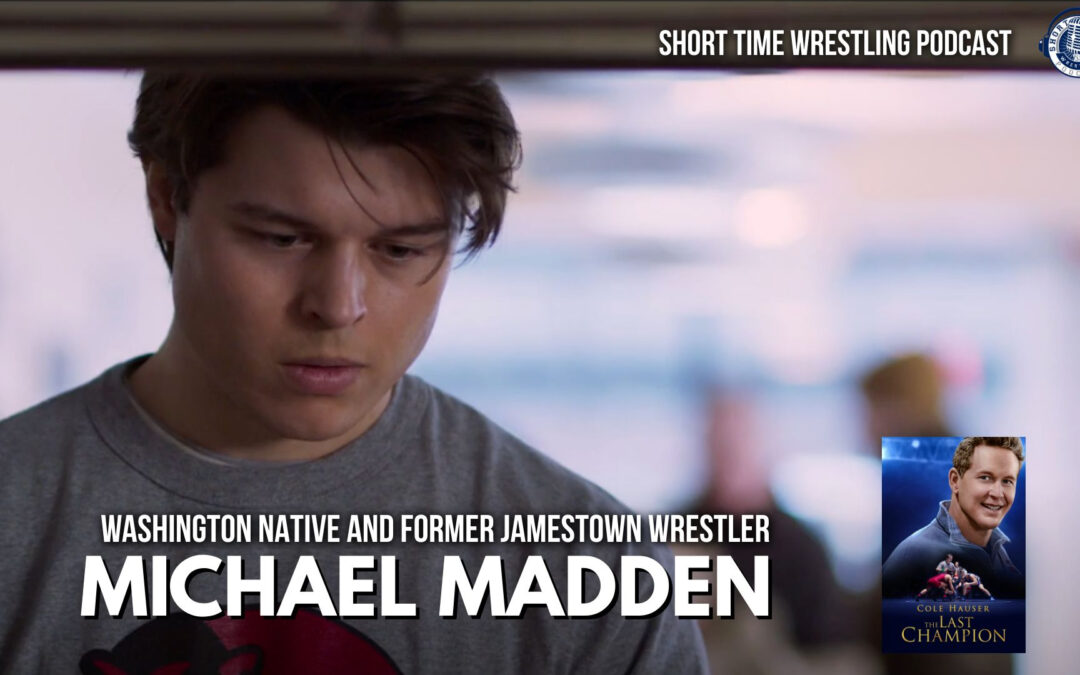 Washington native and former University of Jamestown wrestler Michael John Madden joins the Short Time Wrestling Podcast to talk about his role as Deck Hines in The Last Champion. Madden was a 2009 state qualifier in Washington for White River High School in Buckley. He wrestled for a season at NAIA Jamestown in North Dakota before leaving school to pursue acting.

SHORT TIME SHOTS (it’s the scores and such, people)
In the NAIA, Grand View broke one of college wrestling’s oldest records as the Vikings went 3-0 at the Winter Clash Duals at Missouri Valley to break the all-time dual meet win streak mark. The old record of 92 by SUNY-Delhi was set from 1979-1982. Grand View tied the record earlier this month. In the first dual of the day, Grand View topped ninth-ranked Marian (Ind.) to earn the 93rd in a row to take possession of the record. The Vikings then beat Cumberland University 31-16 and shut out Texas Wesleyan 49-0. I’ll have more breakdowns about Grand View on my Rokfin channel at rokfin.com/mattalkonline.

We lost some valued members of the wrestling community over the past few days. Former San Francisco State head coach Lars Jensen passed away last week. Jensen kept the team alive on numerous occasions, but one of the most impressive performances of coaching came in 1997 when he led the Gators to the NCAA Division II wrestling national championship – all without scholarships. Jensen was a legend in the coaching world and a fantastic person. There’s more in the show notes. Read more.

Earlier this year, I tracked down Pitt-Johnstown head coach Pat Pecora for a two-part series when he set the collegiate wrestling record for most dual meet wins as a head coach. One of the names he talked about during that interview was four-time All-American John Revesz. In the tradition that is UPJ wrestling, there are always those who come first and those who set the standard for a program – Revesz was it for UPJ – as he was  he program’s first four-time All-American. He passed away on Friday due to complications brought on by COVID-19. He was 59. Read more.

Finally, we lost an active competitor last week as Virginia Beach native and Johns Hopkins University wrestler Bradlee LaMontagne passed tragically in a boating accident. While I didn’t know Bradlee personally, there were connections not just to my home state and home area of Virginia, but Bradlee’s mom is a patron of the network. Bradlee’s uncles are longtime supporters of wrestling, including the Great Neck Wrestling Club, Cox High School and the former program at ODU. Bradlee picked Johns Hopkins, a Division III school in Baltimore because he wanted to change the world. From everything I knew about him, from high school coaches who coached against him, his college coach Keith Norris, and those in Virginia and specifically those who populate Shorebreak in Virginia Beach, he was a shining star. This kid was going to indeed back up the claim he was going to change the world. He didn’t know how to quit. Norris explained how he was the team captain and how everything he’d heard about him prior to coming to Hopkins exceeded his expectations.

Three unique and dynamic people from our sport are gone. May they Rest In Peace and the impact they had on others never be forgotten.