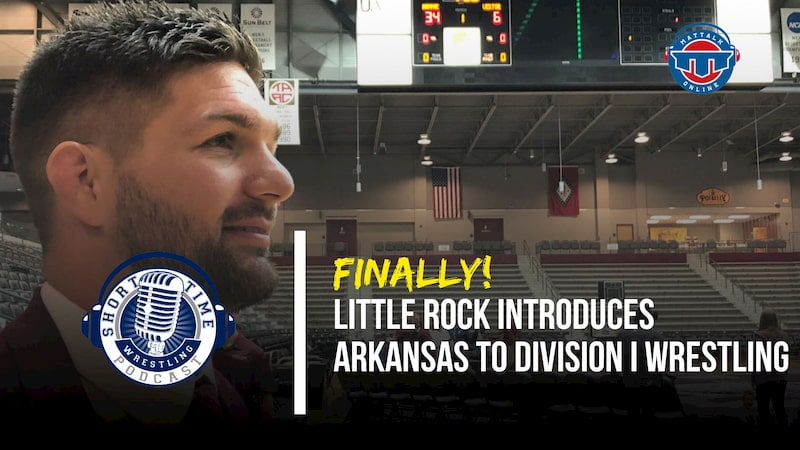 On Sunday, the eyes of the wrestling world were on two places – Ames, Iowa and Little Rock, Arkansas. When it comes to wrestling, one of those places is not like the other. While one saw over 11,000 fans come into the Hilton Coliseum in Ames, Iowa to witness one of wrestling’s greatest in-state rivalries, just under 1,500 fans came to the Jack Stephens Center to witness college wrestling, many for the first time, as the Trojans of the University of Arkansas at Little Rock wrestled the first dual meet in school history.

This is the Short Time Wrestling Podcast, I’m your host, Hall of Fame wrestling writer, broadcaster and announcer Jason Bryant and I had the privilege of being in Little Rock to witness the berth of another Division I wrestling program. While Little Rock isn’t the only new program launching this year at the Division I level, it’s presence in Arkansas makes it the most unique, probably one of the most unique story in wrestling history. I’ve been documenting the story from start to finish with Rocked Up, a serial podcast here on the Mat Talk Podcast Network. Season 1 of that show ends with how this show begins. You can listen there at GetRockedUp.com.

Today on Short Time, I’ll talk with Greg Hatcher, one of wrestling’s most prominent benefactors and a man who purchased nearly every wrestling mat to start wrestling programs in the state of Arkansas. I’ll also talk with George Lee, the Athletic Director at Little Rock. Lee has been with Little Rock as a student and then employee and then administrator since the 1980s. He was witnessing history that was set into motion by a previous AD. Then I’ll talk with Neil Erisman, someone who’s spent over a year and a half waiting for this moment to become a reality.

It’s the news, reviews, previews and interviews from in and around the world of wrestling. The build-up and anticipation are in the rearview, Little Rock wrestling is a reality and it’s today’s featured story. Hear the immediate reactions, because you’ve always got time, for Short Time.