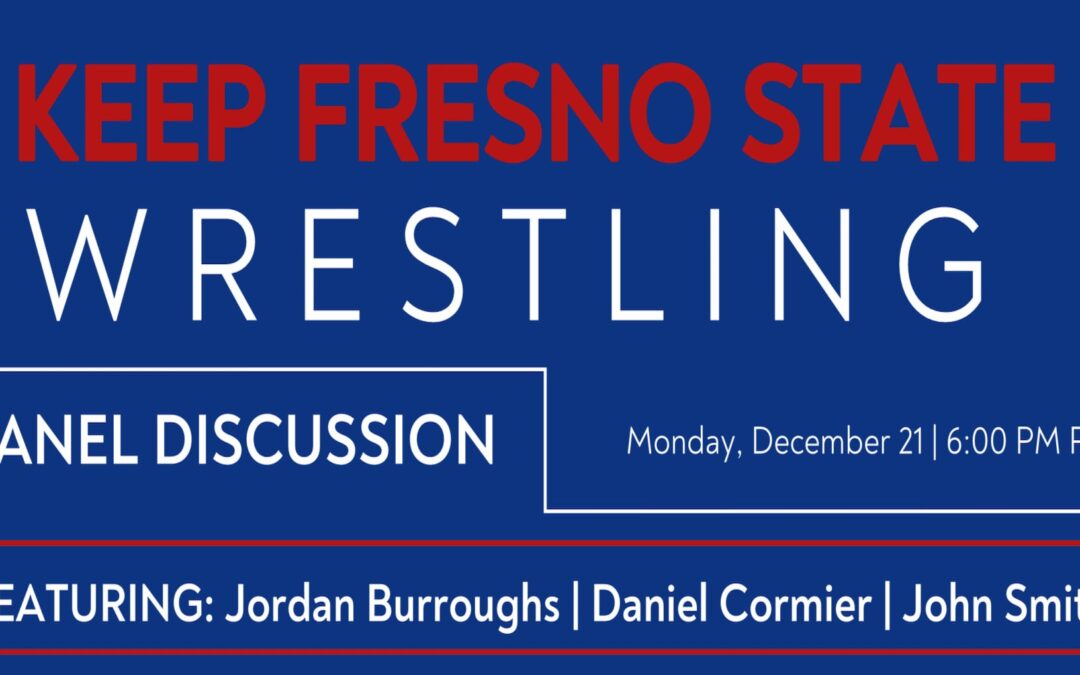 On October 16, California State University, Fresno announced it was dropping men’s tennis, women’s lacrosse, and for the second time in school history, men’s wrestling. After a decade-long quest to bring the sport back to campus in 2016, a new quest has been started by Keep Fresno State Wrestling.

In conjunction with USA Wrestling, the National Wrestling Coaches Association and Flowrestling, the Keep Fresno State Wrestling group will kickoff its official efforts on Monday, December 21 at 6 p.m. Pacific with a panel of wrestling coaches, athletes, and alumni. That discussion will be streamed live on Flowrestling.org and also available via Zoom.

The panel will highlight and celebrate the strong history of Fresno State wrestling, not just with its on the mat successes, but the post-collegiate success and leadership of its alumni in the Central Valley and the state of California. Among those participating with local Fresno ties are former head coach Dennis DeLiddo, current Beat the Streets Los Angeles Executive Director Yero Washington, and wrestling World medalist, Olympian and UFC champion Daniel Cormier, who is the high school wrestling coach at Gilroy High School, two hours west of Fresno. Current Fresno State athletes are also expected to participate.

Also included in the discussion will be World and Olympic champions John Smith, the current head coach at Oklahoma State and Jordan Burroughs. The panel will be moderated by Hall of Fame wrestling broadcaster Jason Bryant.

“We feel this is a valuable opportunity for the wrestling community to be able to share in the development of what the alumni is doing to try to keep the program at Fresno State,” said Mike Moyer, Executive Director of the NWCA. “The Keep Fresno State Wrestling efforts are just ramping up and it’ll be important for the public to understand the goals and mission, fundraising and pledges to make sure we don’t lose another valuable institution in a state that has the highest participation of wrestlers in the country at the high school level.”

The Keep Fresno State Wrestling effort wants to highlight the importance of wrestling in the Central Valley, the state of California and the entire sport as a whole. Wrestling is insanely popular in the Fresno area and the opportunity to tap into a successful pool of potential Fresno State students is high. The opportunities offered for wrestling from public institutions at the collegiate level greatly underserve the demand on sheer participation numbers alone.

“There is a lot at stake here with Fresno State announcing that for the second time, their program would be eliminated,” said Brendan Buckley, a Fresno State alum and the current Executive Director of Beat The Streets New York, a non-profit organization whose aim is to make a Lifelong Impact on New York City student-athletes through the benefits and skills acquired by participating in amateur wrestling.

“There is a strong legacy at play and one that has been the crown jewel for Fresno State Athletics. How many programs on Fresno State’s campus can claim 37 individual NCAA All-American honors, 15 Top 25 team finishes or a three-time NCAA champion and Olympic silver medalist?” said Buckley, speaking to the success of the program.

Of the 23 individuals who earned 37 All-American honors on the mats, 18 of them are Californians.

Keep Fresno State Wrestling wants to celebrate the success that wrestling has brought to those students who would have never come to the school if not for wrestling and the impact that legacy has had on thousands of students, athletes or otherwise, who came to Fresno State because they had a teacher, coach or mentor who gained those valuable life skills through wrestling and through it being offered at Fresno State.

Fresno State’s website lists one of its Pride Points with athletics as: “Our student-athletes are expected to do well in school and act as role-models on and off the field, and the University strives to support them in creating championship experiences. “

Every student should be important to a campus and there is a place for wrestling at Fresno State. It’s proven it can be done, Keep Fresno State Wrestling can match those same Pride Points the school celebrates on its website, there are generations of students who will populate the roster and do the Valley proud. Not providing the community an opportunity to represent itself and another “porchlight” for alumni, local taxpayers and potential degree-seeking coaches, teachers and mentors contradicts the mission of the school.

“The program is about much more than any of these impressive accolades. It is about the unique connection to its community, one that not only breeds champions at nearly 100 high schools in the CIF Central Section alone, but also one that was founded upon hard-work as one of the largest agricultural communities in the US,” said Buckley.

“Fresno State Wrestling is far too important for the aspiring student-athletes from these families that look to wrestling as a vehicle to help them achieve and access education and to continue learning the life skills that wrestling instills – skills that will lead them to success long after their days on the mat conclude. Fresno State’s administration should honor this legacy and support the community they call home,” he added.

Said Buckley: “Fresno State’s decision this past October to eliminate the wrestling program should be a sounding bell for every member of the wrestling community, whether you are associated with the Big 12, Pac-12, Big Ten, a Central Valley high school program or a youth program in any other state across the country. We are all connected and we are asking everyone to get involved to help preserve our great sport and to Keep Fresno State Wrestling.”