Looking back at 20 years in Fargo 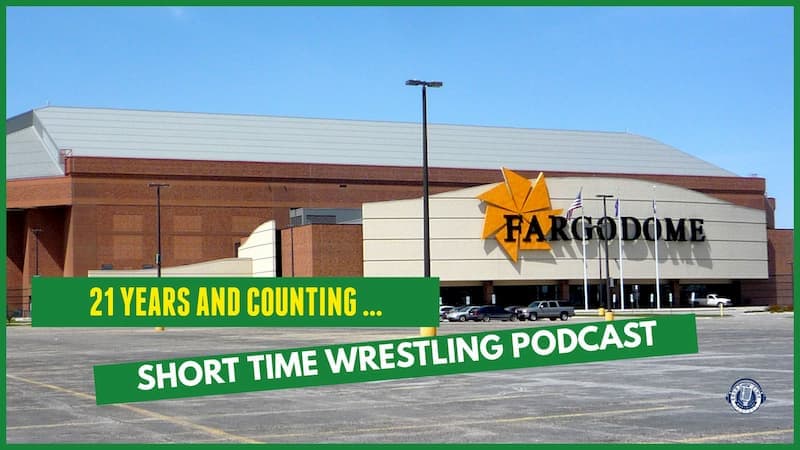 The Years
1999 – First Year
Was working at a KFC in the Grafton section of Yorktown, Va. Got a call from Mike Newbern. “Twink, Gary Alcon (ref) can't make it, do you want to go to Fargo?”
That right there changed it all. Everything.
Stayed in Reed Johnson Hall.
Virginian Christian Smith made the Cadet Freestyle finals at 83.5 pounds. He ended up being a 3x state champion and NCAA qualifier for Duke and Liberty (He took down Nickerson in 2007 to open up the tournament).
There was no Buffalo Wild Wings. There was a Bison Turf, there was a mug and I may or may not have been from Alabama. Or named Kevin.
Shared a dial-up line with Sara Koenig from NCMat.com (you know her now as one of the tournament directors for the Super 32. Rob Sherrill vouched for me for a media credential. Thankfully, I'd met him in Virginia at the Virginia Duals when I was in high school.
Don't remember much about the competition since I was still pretty new to the national scene. We had the Dream Team Classic in VA that year, so I paid attention to guys like Foley Dowd, Jason Powell,
Clark Forward — and two of those Team USA guys met in the finals, Damion Hahn beat Jason Potter.

2000 – Year 2
Buffalo Wild Wings Opened. Taco Bell re-opened, it was closed the year before for renovations.
Harry Lester vs. Mark Jayne, Junior Greco. Jayne was returning JR. Champ, Lester won cadets the year before. 3-5-3 (BOOM). 132 pounds.
Virginia had two cadet champs – Christian Staylor and Albert Childress (almost bookends)
Kid named Tyler Safratowich of Minnesota won at 83.5 pounds, did a backflip, then he started eating.
Mary Kelly going 2-2 in Cadet Freestyle and Micah Amrozowicz, now the head coach at the Newport News Apprentice School, having to come from behind to beat her 8-7.

2002 – Year 4 – Drove from ODU.
FIRST YEAR OF FEDERATION WEIGHTS.
WENT FROM 96 AAS TO 120 IN JUNIORS
104-136
Started bringing my radio equipment and doing the webcast for USAW with Rob and the late Jon Ponwani.
Cleveland – NO
Chicago – Driving down Addison, game over
Milwaukee – Karaoke at a Friday's in Brookfield, WIS
Minneapolis – Twins vs. Angels, Milton vs. Washburn, preview of ALCS
First year of Junior Women — Malinda Ripley beat Mary Kelly in the finals. Who the hell is Malinda Ripley? Natasha Umemoto was 3rd. She got the first pin of the tournament ever.
Poeta beat Metcalf in Cadet FS. Only finals loss in Metcalf's Fargo career. Stepovers, if I recall correctly for exposure.
Decent year from VA, Anthony Burke from my club was 5th in a bracket with Coleman Scott, Mike Rowe, Garrett Scott, Mike Rodrigues, Jake Kreigbaum and Eric Albright. I think I had a team PA jacket on when I gave Burke a high five after beating Albright for 5th.
Patrick Bond won Cadet FS.
Todd Meneely was the OW, beating Teyon Ware.
Some guy with an Afro won Junior FS at 171. Herbert was 3rd. Afro guy recently lost a fight.
VANS WARPED TOUR WAS OUTSIDE.

2003 – Year 5 – Drove from ODU on short notice
Got up, went to Jiffy Lube and boom. Drove to Milwaukee – was using an old atlas, so I didn't know about the cut through via Rockford and kept adding 90 more minutes to my ride. Went to the same Fridays to sing karaoke again.
Sat on top of my truck after a session and listened to a Willie Nelson concert at Newman Outdoor Stadium. Years later, Doc Jim Porter would crap all over my Nelson story and say he went and ended up hanging out with him.
All-Southern Cadet final as Nick Marable of Tennessee beat Ben Fiacco of Georgia at 145
Cormier vs. Morrison wrestle-off. I slept through the first one. Not a great moment, but indicative of my 20s.

2004 – Year 6
Rode the bus with team Virginia, wrote a blog as we went all week for the old Mat Talk. Won the Connect 4 championship on the bus, beat Josh Wine 51 consecutive times in Connect 4. Finished up my last college class two weeks after getting home. Finishing up 7 years in college.
Henry Cejudo beat Spenser Mango in the Greco finals, was up 9-0 or something and thought he'd gotten the tech, then Mango bombed him for 3 (should have been 5) before Cejudo finished it 13-3.

2005- Year 7 –
Hired at InterMat. Pretty sure I flew.
Stayed at either the Econo Lodge or the Best Western near Bucks. I still hear the bullhorn go off whenever I hear Mony Mony.
Florida had a monster year, although I got into an “argument” with Rob Sherrill about who Franklin Gomez counted for — Florida or Puerto Rico. I say PR, because that's who he was representing.
Robby Smith beat Cody Gardner in Freestyle, which stunned us from VA. Justin Wren won in Greco, but when Luke Ashmore won, they all climbed over the railing to celebrate, then trying to go back, Wren got into an argument with a security guard and got thrown out.
Couple of Wyoming kids met in the Greco finals, but one had moved to Ohio. Tyler Cox pinned David Taylor in Cadet Greco. Taylor beat BJ Futrell to win cadet FS at 91 ? pounds.

2006 – Year 8
First year of the garbage rules.
Hit a rainstorm coming through O'Hare and spent the night there. Connor McDonald took my spot on the last plane to Fargo from O'Hare. Then he wins the tournament. The little shit.
ODU had two signees in the Fargo finals — James Nicholson at 119 and Adam Koballa at 130.
Eric Grajales bombed Donte Butler and during my interview, Butler cut through it talking some trash. Grajales goes “I just fived you!” in response. Butler has the unique distinction of being the ONLY five-time finalist to never win a title.
Eli and Michaela Hutchison become first brother-sister combo to win Junior titles in the same year.

2008 – Year 10 – Last year at InterMat
Drove straight through from PA to Minnesota. Stopped in St. Cloud for about 2 hours, missed the first session.

2009 – Year 11 – Wrestling 411/USAW
“That just happened” – This was the finals where Mark Grey was about to start giving an interview, then he was brought back to the mat to re-wrestle the last few seconds of a second period, only to have Ben Whitford score, force a third and then win the title with a third-period win. Man, those rules sucked.

2011 – Year 13 – USA Wrestling
Parker VonEgidy makes finals with TWO losses. Ended up with 3.
Situation – Abounader, VonEgidy, O'Donnell- won by Ricky Robertson. I think I've rehashed this on every single show I've had Dom Abounader on.
Pat Downey with limited FS experience wins over Jordan Rogers at 171. This looks a lot better now than it did then.

2012 – Year 14 – USA Wrestling
Zain vs. Zane at 132. Retherford would win cadet WC that year.
Cox/Snyder – J'Den wins Freestyle, Kyle wins Greco.
Brett Haas wrestles them both.
Willie crashed on my couch and squatted all week during his TOM era.

2014 – Year 16 – Mat Talk
Coltan Williams from Texas, OMG that throw in Cadet Greco vs. Wilson Smith of NC
Johnny Blankenship and Trey Meyer going through my table, and through me — no STWP tonight folks.

2015 – Year 17 – Mat Talk
How good those cadet champs were. Gable Steveson, Schwartz, RBY, Raimo, Warner.
Wittlake's shoes.
Interviewed the Mayor of Fargo for Short Time. He lied about there not being any construction around town.

2017- Year 19 – Mat Talk
Alabama's Sam Latona won the state's first Junior freestyle championship. The soon-to-be Virginia Tech signee claimed gold at 106 pounds. Two months before they would win Cadet World Championships, Will Lewan and Aaron Brooks won Fargo titles. No Turf, so Herd & Horns was the replacement venue for mugs. There weren't nearly as many shenanigans there, simply because it was cleaner, neater and had better food.

2018 – Year 20 – Mat Talk
The Turf re-opened. There was again cornhole to be played. Willie, Spey and myself championed the first ever Wrestling Trivia night. Spey dropped some quality knowledge, all the while Willie answered ONE question, then paraded around the restaurant like he was the freaking MVP. Entries here were 4,999, just one below the elusive 5,000. Carson Manville represented Pennsylvania, however that works, and won double Cadet titles. Jakason Burks was mighty impressive, winning Nebraska's first Cadet freestyle title since Thomas Gilman represented the state in 2010. Super beastly crop of champions on the Junior freestyle side of things too with pretty much everyone being a hammer.
Introduced Earl Smith to Fargo. Ashley Sword showed me that I could get free nachos with the Buffalo Wild Wings app. I was also interviewed by Wayne Fish. Zach Elam generally thought I was mad at him. Discovered Labby's has Castle Cream Ale on draft – the last night we were there.

Things I can't remember the year, but are of note.
— The year the first session was canceled because they couldn't get the first electronic bracketing set.
— When Fargo went from 1 a.m. to 2 a.m. for last call.
— Beating Kendall Cross in Foosball AND Greg Jones in Darts in the same night.
— Mike Newbern driving us to Bucks and bumping a redneck's truck in the parking lot of a country bar, later determined it wasn't much of a country bar.
— $2.50 domestics at the Turf.
— The Flo intern who wasn't old enough to drink.
— The Flo intern who got his fake ID taken
— Drinking dirty martinis and playing silver strike bowling with Jeff Blatnick.
— Ted Witulski standing next to me saying “We'd like to hire him if we could finally get him to graduate” — this might have been in 2002.
— Bucky Maughan telling me Grain Belt Premium will put hair on your balls.
— The story about how I missed the first Cormier-Morrison wrestle-off.
— Karaoke at Chumleys.
— Dwaft wrestling at Coaches.
— Coach from Delaware eating glass. Like chewing it up.
— Unnamed USA Wrestling intern thinking it was a good idea to go up to his HS coach at Perkins at 4 a.m.
— Unnamed USA Wrestling intern (a different one) showing up late for noon sessions because of their footwear.
— Doing a story on The Turf.
— Willie taking about an hour and a half to order lunch at B-Dubs, which is almost a yearly occurrence.
— The referees chants when entering the Turf.