ST117: Recapping up the kickoff weekend for the 2013-14 college wrestling season 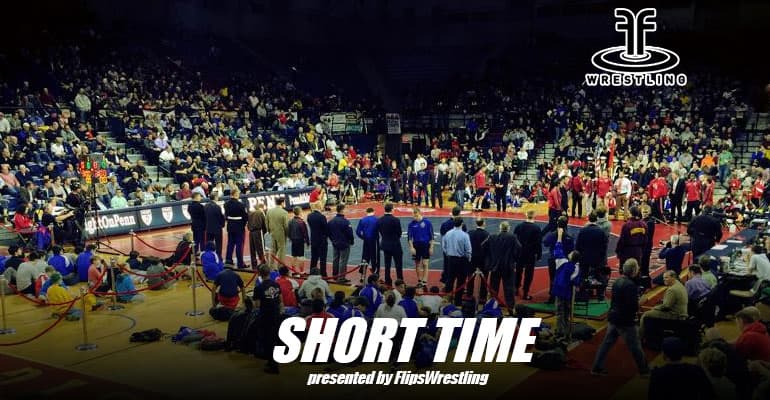 We’ve got no guest on Short Time tonight, but we’ve got a lot of news from the kickoff weekend for most of the college wrestling programs around the country. Granted, the women and California junior colleges have been wrestling prior to this weekend, so we’re not trying to slight them, but with the All-Star Classic, some duals and some opens, here’s a quick rundown of the weekend’s happenings.

The NWCA All-Star Classic came and went in Philadelphia on Saturday at the Palestra. Unfortunately, a lot of the chatter seems to be floating around the nation’s best wrestler who didn’t compete – Ohio State’s Logan Stieber. Stieber weighed in but wasn’t cleared by his doc, so there was no match. Some out there want to chastise this for not being reported up to their standards. Well guess what folks, when that’s all the information you’re given, that’s all you have to deal with. If you think anyone of us has any type of pull with a medical professional for a college athlete, I’d implore you to read Mark Palmer’s post on themat.com’s college forum, which explains why many of wrestling’s “newsy” injuries aren’t covered like the major college sports. Unfortunately, that’s the way it works. I only found out moments before the exhibition matches started and my responsibilities with Fox College Sports for the television production prevented me from issuing a release from the NWCA. If you want to make a big deal out of it, that’s your prerogative. Spare me the “bad for the sport” angle.

Now, with matches that did happen, we saw two defending champs go down as Mike McMullan of Northwestern beat Nick Gwiazdowski from N.C. State at heavyweight and Minnesota’s Scott Schiller beat Missouri’s J’Den Cox in overtime. It’s going to be tricky to use the Cox-Schiller match for ranking purposes, because the match did include a situation where the experimental rule was used. That experimental rule was where if the wrestlers go out of bounds while the top man is in control, the top man has the option to put the bottom man in neutral without giving up an escape point. We’ll have to discuss how this works with TheOpenMat.com’s next set of individual rankings. The matches at the All-Star are not official and can’t be used for seeding at nationals, but some ranking services have still used the results for their respective rankings. If it was wrestled under the same rules we’d see in March, then sure, use it, but Cox might end up staying No. 1 simply because this experimental rule did show up in the bout.

Stanford beat Cal Baptist in a season-opening outdoor dual that drew about 2,600 fans. Notable “where has he been” comes from Cal Baptist as Minnesota native and former Buffalo and Menlo wrestler Jake Waste has resurfaced at Cal Baptist.

In notable open competition, the much ballyhooed Ohio State Buckeyes looked sharp at the Michigan State Open. The Buckeyes crowned open division champions with Nathan Tomasello at 125, Josh Demas at 157, Bo Jordan at 165, and Kyle Snyder at 197.

Jordan topped Michigan’s Taylor Massa 4-1 in the final at 165 pounds, while Demas edged Michigan’s Brian Murphy 2-1. Tomasello rolled past Northwestern true freshman Stevan Micic 11-2. Earlier in the day Micic beat 15th-ranked Connor Youtsey of Michigan. Kyle Snyder’s college debut was pretty sound. He beat Max Huntley of Michigan and Phil Wellington of Ohio in the semis and finals to win his first college tournament. Expect to see Snyder break into the rankings this week on TOM.

Prior to the All-Star Classic, the first NWCA Division I Coaches Poll was released and despite not getting the most first-place votes, Iowa will start the year at No. 1 followed closely by Minnesota, which received six of the 12 first-place votes. Cornell, Ohio State, Penn State, Missouri, Nebraska, Oklahoma State, Michigan and Edinboro round out the top 10.

In other notable factoids in college wrestling this week:

Earlier in the week, Williams Baptist and coach Kerry Regner picked up that schools’ first-ever dual meet victory with a thrilling 19-18 win over Missouri Baptist on Tuesday. Patrick Grigsby’s fall at 149 pounds in the final match gave the Eagles a victory in its first ever dual meet. Wonder if it involved some Greco throws.

Someone was sure to get their first win on Saturday as two brand-new NAIA programs faced off. The Braves of Ottawa University out of Ottawa Kansas topped the Scots of Lyon College, a new program in Arkansas 35-15. Congrats to coach Kevin Andres for his program’s first win.

Of course, we can’t forget the high school kids. The Super 32 and the Freakshow ended this weekend. Some of the notable championship performances from the Super 32 included Spencer Lee’s 26-second fall in the finals at 113 and Yianni Diakomihalis’ 5-0 win over Daton Fix at 120. Full results at Super32.com.

As you may know, Short Time is presented by Flipswrestling and is part of the Mat Talk Podcast Network. You can find all the shows from the Mat Talk Podcast Network at www.mattalkonline.com. Currently, our shows include On The Mat, which is hosted by Kyle Klingman of the National Wrestling Hall of Fame’s Dan Gable Museum. We also have two team-specific coaches shows with Inside Virginia Tech Wrestling and the ODU Wrestling Monarch Matcast as well as an add-on to the World Wrestling Resource, a group comprised of Dubuque head coach Jon McGovern and World Champions Dennis Hall and Terry Brands.

We’ve also got big news about a new show coming to the network this week as we’ll add our first coaches show from a Big Ten program. Keep an eye on Mat Talk Online to find out which team it is and how you can listen.

By the way, congrats to coach McGovern and his wife Lis on the birth of their son JonMarc on October 30.