ST129: Madison Square Garden’s Dylan Wanagiel on the Grapple at the Garden and a rant on criteria 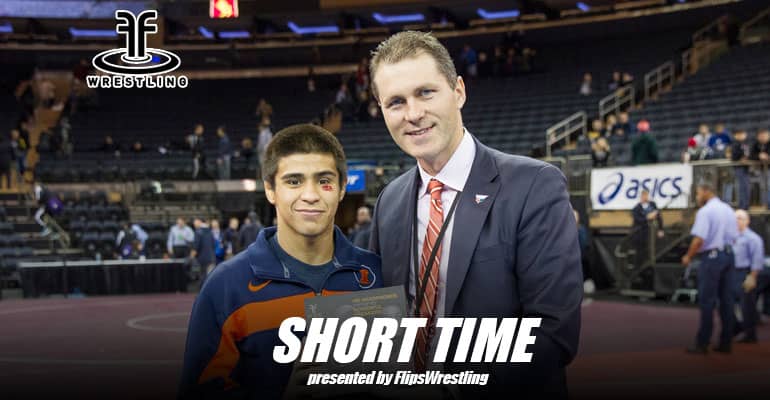 Episode 129 of the Short Time Wrestling Podcast comes your way with the Director of Sports Events at Madison Square Garden, Dylan Wanagiel. Dylan talks about how the idea for the Grapple at the Garden got started as the event will kick for a third time on December 21 in New York City.

Wanagiel explains what goes into the event, what fans can look forward to seeing in New York City and things they can do to prepare for the 2016 NCAA Championships coming to Manhattan.

It’s a fun discussion with someone who’s working hard to make college wrestling in the World’s Most Famous Arena a success.

So now you want to talk criteria. Sure thing.

At the beginning of last season, the NCAA rules were changed regarding tiebreaking procedures in dual meets. Based on Missouri’s 20-19 criteria victory over Ohio State on Sunday, people apparently just found out about Criteria #4 … or at least the people who took to social media on Sunday after the match.

Criteria 4 is simply the first takedown. Not a total of first takedowns, but the FIRST takedown in the dual. Seems arbitrary right? Did you even care until two top 10 teams were so even, they went down to the final criteria, one that could NOT be tied?

Earlier this year, Rider beat Wisconsin on the very same criteria, it barely measured on the Twitter radar. In fact, the Rider-Wisconsin dual was the first in Division I dual to be decided in this manner. I was incorrect in my Twitter notation about last year’s dual … I’d incorrectly said it was Belmont Abbey, well you have to go to January of 2014 in a Division II dual between King and Anderson University to find the only time a dual had been decided by Criteria 4.

It was two unranked teams in Division II. No one was clamoring for a change when this result was noted in Short Time and on a blog topic, but when it’s Missouri and Ohio State, now people notice.

First off, I don’t care for Criteria 4 determining a dual meet winner. That being said, the rule has been on the books for a full season and coming into this year, no one seemed to care because it didn’t impact the highest level of collegiate wrestling.

I’m wondering where the bellyaching was when the rule was put in? We talk about the stalling rules and the experimental rules, but this one seemed to miss everyone, despite it being disseminated in the exact same manner as every other rule change from the NCAA.

So what’s it mean? Well, nothing really, other than we only tend to pay attention to bad rules until they impact something we don’t want it to impact. It’s like that rare rule in baseball where if a catcher picks up the ball with his mask and not his hand or glove. That ended up costing the LA Dodgers a game a year or two ago. Rule has been on the books forever, but it rarely happened and impacted a game with teams in a playoff race. All of a sudden, this is the worst rule ever.

In fact, I’m not going to say I don’t care for Criteria 4, I don’t like Criteria 4. I don’t like it. But what this outcome showed was two things – it got people talking about a dual meet outcome being meaningful rather than the “March only matters” mantra. It also got people discussing something usually given only marginal discussion on messageboards, and that’s how criteria COULD or SHOULD be applied.

Prior to the rule change, the tie-breaking criteria ran through several iterations. One even went as far as the first criteria was if a team was deducted a team point during the course of a dual.

If you’ve been reading Wade Schalles’ blog at www.wadeschalles.com, How Wrestling Wins, you might notice he points out a technical foul scenario similar to basketball where a coaches action can put a shooter on the line.

So we could go back to that, putting emphasis on sportsmanship.

Corey Kalina suggested on Twitter that forfeits be worth seven points. This gave me an idea to tweet back to Christian Pyles, who started the discussion with a rather open-ended Twitter thought. Yes, the first takedown of a dual can be so disastrously outlandish, especially when that wrestler loses a match. But that came into a potential scenario last week when Rider beat Lehigh on criteria. If Doug Vollaro had won his match by seven points, it’d go back to the Criteria 4. Guess what, Rider’s J.R. Wert LOST his 125-pound match against Scotty Parker, but Wert scored the first takedown.

I remember thinking that would be real odd to win a match on a criteria where a wrestler lost a match.

In Rider’s win over Wisconsin, which again was decided by Criteria 4, Chuck Zeisloft’s first takedown came in overtime over Rylan Lubeck. So it wasn’t even a first period score that determined that winning takedown.

Mason Beckman of Lehigh chimed in with a relevant thought, which I somewhat referenced just a moment ago. What if the wrestler who scores the first takedown gets teched? So that determines the dual? Good points all around.

My thought would be keep the first criteria the same, most match victories. This makes sense. Second would be team with the LEAST amount of forfeits, then we go to six-point victories (falls, disqualifications, injury defaults). But from there, do we further complicate things? One thing about a four-criteria outcome is there were only four. You couldn’t “tie” on a last takedown unless there was a situation where an entire dual meet could not have a takedown. What are the odds that could happen? Really? Well, as rare and statistically improbable, it COULD indeed happen. So then what? I guess that shows Criteria 4 isn’t truly a tie-breaking criteria because it could, in its most basic sense, have no determining winner. So then what? There’s nothing in the book.

That being said, I say we can go back to the more common dual meet advancement criteria established by the Virginia Duals so long ago. I think we go back to the sportsmanship angle, so if you lose a team point, that’s the first one. Then we move to number of victories, fewest number of forfeits, most falls/dq wins/injury defaults, then most technical falls, then most major decisions.

I’d want to avoid most penalty points, because that could essentially mean one stalling point in a blowout win or loss could be the determining factor in the dual, but then again, it’s that way when you figure out current Criteria 3, most match points.

Long story short, I would whole-heartedly agree the criteria needs to be changed, but I would have also thought this should have been brought up immediately when someone noticed Criteria 4 was pretty much arbitrary.

Then there’s the other stance to take: Teach your wrestlers to score first. That garbage takedown in the first 30 seconds against a returning NCAA champion could just win your team the dual, even if you get jacked up the rest of the seven minutes.

It’s got to change, but do think the reaction about the criteria happening a full year after the rule was implemented is a bit about being late to the party. That rule was in effect, the coaches should know it.

Personally, I think in duals, forfeits should not be an easy way out. That’s not a shot at coach Brian Smith, who did what he could to win a dual because he feels duals are important.

Enough with the rant. There’s some great discussion out there on twitter about it, so jump on in.

Do you have a thought about this? Leave an audio message on our Sound Off line at www.mattalkonline.com/contact and tell me what you think.

Now, here’s my interview with Dylan Wanagiel about the upcoming Grapple at the Garden.