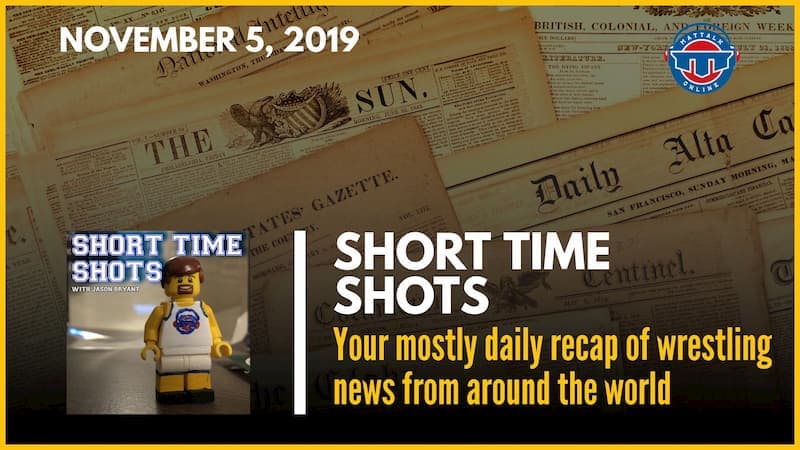 It’s Tuesday, so that means all the rankings in the world are now available in Division I wrestling. Flowrestling, Trackwrestling, AWN, WIN, The Open Mat, InterMat, the society for the reintroduction of feral cats and Nipsey Russell’s House of Hustle have all released their college rankings. They come out Monday or Tuesday, you know where to go for them, so I won’t bog down the show with notes about them here. I will say, I do despise tournament rankings being used for dual meet promotion. You wrestle duals, use dual meet rankings. Several of them are also out there – pick one. Starting off the show with a rant rather than a rub, this is Short Time Shots, a mostly daily look at the scores and more from around the world of wrestling. I’m Jason Bryant.

Limited night in duals, so we’ll just throw out what we’ve got before it gets too late and my kids wake back up. My wife’s still in China, which means I’m still in survival mode. I love my kids, but you really do lose all sense of personal time when you’re watching them solo. Tonight, it was the Little Mermaid Live. Under the Sea, take it from me … there’s some messed up lyrics in Disney films.

Minnesota Beer of the Night: And you know the NCAA Division I Championships are coming to Minneapolis this year. So with that in mind, when relevant, I’ll give you my Minnesota beer of the night. Tonight, it’s Pixel Bot, a New England IPA that’s 7.6% ABV, but a smooth 11 IBUs. If you don’t know what that means, it means its not bitter and has a bit of a kick. It’s by Tin Whiskers Brewing Company in St. Paul.

You can get to read those stories and more from Mat Talk Online’s daily wrestling newsletter. Sign up for free at mattalkonline.com/news and get the day’s top stories from around the world in wrestling delivered to your inbox for free.

On the Docket for November 6:

I’d love to do more with the NJCAA but the schedule compilation is just too brutal.