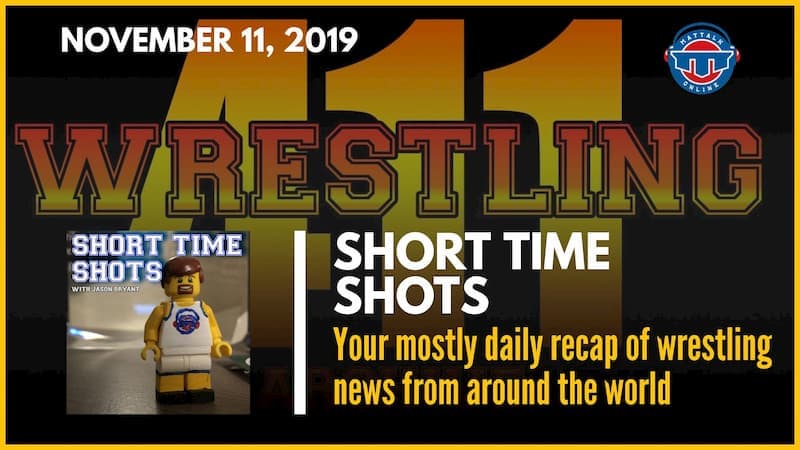 November 11 is a day that’s extremely memorable for me and the career path I chose. You see, 11 years ago, Kyle Klingman and I kicked off our very first podcast, Wrestling 411. By the way, I’m Jason Bryant, and this is Short Time Shots, a mostly daily look at the scores and more from around the world of wrestling. So back to the story – It was a J Robinson idea housed within a brand called Media Sports Productions, the acronym befitting its home base, Minneapolis. This was the gig I left Pennsylvania for. J Rob and Wade Schalles, wooed me over the phone from my newly purchased row home in Lancaster, Pennsylvania. I saw the pay increase, the chance to continue to further my goals in broadcasting and a chance to get a fresh start in a new area. Wade left shortly after Kyle arrived from Iowa and me from Pennsylvania. Ultimately, we got left holding the bag with little of the start-up money to work with and Kyle and I limped through a very tough year, one that put both of us at odds with one another and put both of our futures in the sport in doubt. Kyle and I talked about this a year ago, when we hit the 10-year anniversary of our foray into podcasting and failed television production. Our first guest was Tom Brands. The audio was terrible, our rapport wasn’t there and it might have been one of the worst shows either of us ever did. Even though I linked it here, don’t listen.

We sat at Augsburg’s KAUG radio studios – Kyle knew this was doomed from the start. I thought so to, only I held on to the illusion that we could actually pull this off. Well, we didn’t and 11 years later, here we are, and here you are. That was the second known wrestling podcast, Mat Slammers in Iowa was the first and there was a short-lived show up in Canada for a while too. All that being said, 11 years gone and a lot of things changed for the better out of that experience. I’ve distributed, produced and hosted over 2,400 podcast episodes in that time and I’ve done 1,308 of those myself. Uffda. Now, before I get to the news, this important note from my man Andy Voit. No, he didn’t pay me to say his name on the show.

Notables on the Docket for November 12:

If you'd like to SUPPORT THE SHOW and all the on-demand audio offerings, free newsletters and historical research. One of the perks is that cool Compound gear, you can support this program by making a small monthly contribution or one-time donation to the network going to mattalkonline.com/jointheteam. Venmo, PayPal, Buymeacoffee.com or Patreon, but the monthly Patreon team is where you get the cool perks like shirts, glasses, hats, digital preview guides, shout outs on the show and even a chance to be on Short Time!