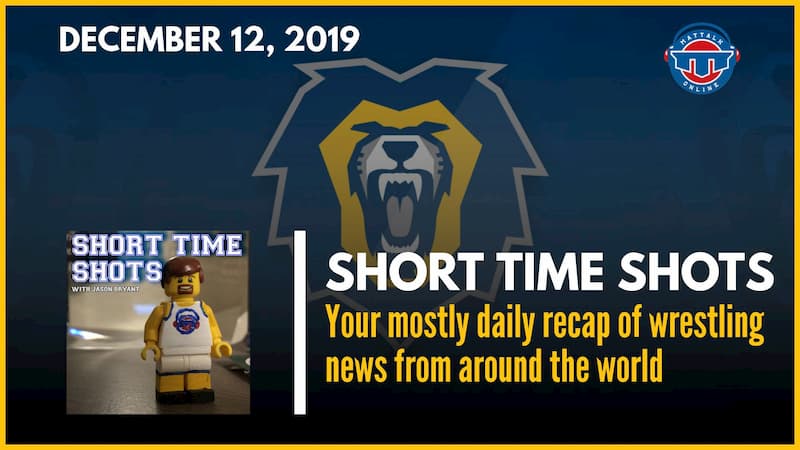 The number 12 carries religious, mythological and magical symbolism, generally representing perfection, entirety or cosmic order in traditions since antiquity. It’s also the number of qualifiers teams in the NAIA are allowed to send to the national championships, and the most frequent number won by Super Bowl winning quarterbacks. None of that is scientifically researched because why should I be the last guy on the earth to fact-check things before I post them. The first citation is from my former roommate Willie Evans and the rest of the 12 House Crew as we celebrate the 12 House New Year on 12:12 at 12:12. This is Short Time Shots, your mostly daily recap of the scores and more from around the world of wrestling. I’m Jason Bryant and I’ll probably be recording this around 12:12 … on the 13th.

By the way, it’s never the best look to apologize in the intro of a podcast, so I won’t. However, why no Shots the past few days? Well after realizing it’s extremely difficult to schedule and cultivate this while working an event – I was in Canada announcing their Olympic Trials – it’s also tough to do when you don’t have another parent around. My wife was also traveling for business. But I did decide to push one out today – why? Well, the longer you put off doing something, the longer it takes for you to actually do it – or something. You know what I mean.

Minnesota Beer of the Night: French River by Wooden Hill Brewing. To be honest, I didn’t like it too much. It’s a 6.5 percent saison, but it tasted better when I had it at the brewery in Edina. Could just be a bad can. I contemplated not doing it, but for consistency sake, because this show is ALL about consistency.

New Patron: Thanks to my man Tony White back in Virginia. He’s the newest team member of the Mat Talk Podcast Network. Find out how to be a cool guy like Tony later on in the show.